The recent vote by the people of Switzerland to ban minarets is at best misguided, at worst downright racism*. Out of the 400,000 Muslims in the country, only 1 in 10 actively practices their religion and there are only 4 minarets. Not one of them does a call to prayer out of respect for their neighbors. It appears the Swiss have forgotten that respect is earned, not given, and that turning around to tell a minority what they can and cannot build is distressing.

Architecture is a political act. What, where and how we build is affected by politics, but this is beyond the pale. This story has become the center of debate in architecture firms across the globe. We are not talking Tiger, nor are we hyperventilating over Dubai: it is the banning of minarets. Recent online discussions on architectural sites like Archinect show the dismay (and support) at this decision and it is hard to disagree that the fact that this even got on the agenda is eye-opening. Many of the moderate Swiss suggested that the ban was for 'architectural conformity' but the SVP political party said they represent a "political-religious claim to power, which challenges fundamental rights."

Some context: the minority Muslim population in Switzerland are mainly refugees from the Yugoslav wars, so they are European. Not that this makes a huge difference, but Europe has had its issues with countries going after religious minorities.

If the West wants to show that it is a culture of openness and peace, this clearly sends a wrong message. Think I'm over-reacting? Below are two images, one from the campaign to ban minarets and the other a photo I took a few years ago. One suggests minarets are missiles, the other to kick the black sheep off the Swiss flag. So much for being a 'neutral' country. 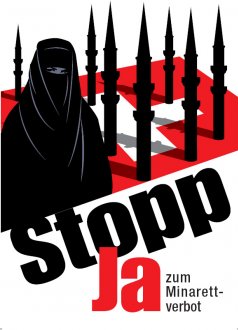 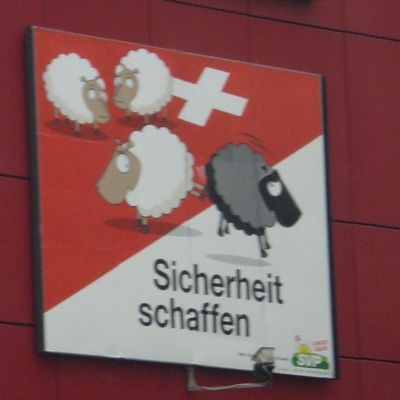 President Obama and all leaders in the West should denounce this decision and call on the Swiss government to overturn this ban immediately.

Update: Around 80% of the comments are regarding the use of the term 'racism' and using that as a basis for proving that this ban is ok. The original title was 'architectural racism' and a play on the fact the Swiss were objecting to a 'different looking' architectural structure. It should really be 'religious intolerance' but you get my point. I guess my grammar was 'misguided' at best.

As for the posters ribbing me about not understanding what it is like to be European and for my poor English being a reflection on American education system - I was educated in the UK and a European. Try not to jump to conclusions.