It was in Pittsburgh last October that I first learned of the Colombian architect, Giancarlo Mazzanti. Raymund Ryan, Curator of the Heinz Architectural Center at the Carnegie Museum of Art (CMOA) was giving me a tour of the Building Optimism: Public Spaces in South America exhibit, which was still in the process of being installed. We paused before a drawing of Mazzanti's masterpiece, the Spain Library Park (Parque Biblioteca Espana) in Medellin.

Ryan first saw Mazzanti's work in various publications. His designs struck Ryan as having "a strong and memorable image, an image directly connected to place and to construction techniques as well as being playful." Intrigued, Ryan visited Colombia to see Mazzanti's work first hand, on a curatorial journey to research the Public Spaces show.

Several weeks later, as it turned out, I heard Mazzanti give a talk on Current Work: Playing Anomalies at the Architectural League of New York's annual series held in the Great Hall at Cooper Union. The event was moderated by Chris McVoy, a senior partner at Steven Holl Architects, who first met Mazzanti in 2010 at the Colombia Architectural Biennale in Medellin, and it was co-sponsored by The Irwin S. Chanin School of Architecture of The Cooper Union and Columbia University Graduate School of Architecture, Planning, and Preservation where Mazzanti was teaching for the fall semester.

Manzatti began by explaining the context for the Spain Library Park (2007). Historically, Medellin was a tough city, spatially and socially fragmented, and it was also a city known for its poverty, drug wars, and most famous for drug kingpin Pablo Escobar who was shot and killed by security forces in 1993. Although feared by residents of the city, Escobar did much to elevate the political power of the residents of the city's slums or comunas, turning them into agents demanding change.

With the election of Mayor Sergio Fajardo (2002-2007) who later served as the Governor of the Department of Antioquia (2012-2015), Medellin made radical progress. Underlying the change, was the mayor's belief that addressing security issues alone was not enough: a cohesive architectural strategy was necessary to transform the city. Together with a team of experts including architects and planners, the Urban Development Corporation (EDU) shaped an innovative vision, accomplished by touching base with the community.

Mazzanti was one of a number of talented architects who took on the challenge of the new social urbanism. Since Medellin was situated in a valley in the mountains, Manzatti conceived of his Espana library as much as a landscape as a building, locating it in the Santo Domingo Savio neighborhood, considered by many as one of the most dangerous places in Latin America. It was patrolled by urban militias and people were rarely on the streets after 5 PM. The opening of the Medellin cable car, three years earlier in 2004, did much to improve the neighborhood and paved the way for his design.

Mazzanti's concept was to form an open air city library, which could be reached by the Santo Domingo stop of the Medellin Metrocable. People rode the cable car up to the building, a site humming with activity: rooms for kids, where 10 minutes of games alternated with 10 minutes of education. The three interconnected buildings (a library, training rooms, and an auditorium), have small windows, disconnecting users from the neighborhood in which they are located. Nevertheless, they are situated so that they are very visible from the valley. They rise up seemingly, "born of the earth" like three giant boulders, sheathed in black stone. In November, 2016, when I visited the city, the complex was closed for facade repair. All one could see from the Metrocable was a mass covered with scaffolding.

Elsewhere in Medellin, Mazzanti designed his Four Sport Scenarios for the 2010 South American Games (2009), another project that rises like a mountain. Ribbons of steel support the undulating rooftops of the buildings creating a landscape and the complex works as a large urban space of over 30,00 square meters, with public open spaces, semi-covered public spaces, and indoor sports facilities.

Mazzanti is very clear on the starting point for all of his projects. He begins by looking at social patterns: at how people use spaces. Once he has done this, he is careful to build programmed spaces and non-programmed spaces where the people themselves shape the usage of the building. "In Colombia, social engagement coexists with architectural experimentation. It is in the air," Mazzanti said.

Mazzanti does not impose form and materials on the community. Instead, they learn together. To find out what people really want, Mazzanti goes beyond merely asking basic questions. "If you ask Colombians what they want in a park, most would say a soccer field."

Mazzanti asked people to draw things that were very important in their lives. The result were pictures of the Madonna, family, domestic scenes, plants, orchids, and their relation to agriculture which inspired his Green House project, where the landscape is a mechanism for building community. An aluminum mesh frame with plants hanging from it. Canopies, not just for shade, but as a climate mechanism. Another project, currently under construction, reserves a space under a canopy where people can turn on faucets, "making it rain," a place where architecture can trigger a different atmosphere.

Mazzanti believes that you cannot control a building. "Buildings are not objects. Architects don't make iconic buildings. People make them iconic." To Mazzanti, architecture is action: "a game for social inclusion." Mazzanti, who won his first public project competition in 1989 when he was only 22, had made his career out of public competitions. This is true whether his firm, El Equipo de Mazzanti, is building schools, libraries, sports facilities, or museums. "Competitions are the most democratic way," he said. "I don't understand another form. I love it. It is better than discussing details with a client who wants a beautiful door."

Mazzanti's passion for design as a catalyst of an environment, as a positive triggering mechanism is nowhere more apparent than in the Pies Descalzos School in Cartagena, Colombia, completed in 2014. Set on top of the Loma del Peye Mountain, the school can be seen from the airplane, rising above its surroundings. The design of the building is based on a sequence of three intersecting hexagons with covered patios.

On the dirt road up to the school, you pass a neighborhood that has improved slightly since the school was built said Simon Hoyos, an English teacher in the middle and high school. Children who live in the neighborhood walk up the mountain. Parents and other locals now want to live near the school because it provides services. There is a football (soccer) field for the community and it serves children from pre-school through high school.

Little ones arrive at 7 AM, often with no breakfast and they are given a small morning meal of bread, milk and fruit. In the middle of the day, at noon, all children receive vegetables, meat, rice, and milk, provided by the government. Colombia is divided into economic areas, strata 1-6 and the neighborhood surrounding the school is 1-2.

"What you see here," said Daniela Garcia, who spends two hours per week teaching English to 4th and 5th graders, "is definitely not gentrification. You see gentrification in Cartagena but here it is all about positive change in people's lives."

These words would make Mazzanti very happy. He is determined to use his architectural design "to trigger learning." One technique in his design process is to use the repetition of templates, (the hexagons in the Cartagena school) to call attention to structure, with each unit, although independent, relating to the next.

"Playfulness is a critical aspect of Mazzanti's work," Raymund Ryan said. "Playfulness in color and form and pattern (as evidenced in the Medellin Sports Halls). And, playfulness in the sense of system--structural elements as modules that can combine to create organic institutions." This design allows for buildings "to grow or contract and for individual units (classrooms in the Pies Descalzos School) to be read as components of a greater whole."

Mariana Bravo, Communications Coordinator at his Bogota studio shows me a clear plastic vitrine filled with colorful pieces shaped like the modules of Mazzanti's buildings. Viewers were encouraged to put their hands into gloves which were inserted in two holes in the vitrine so that they can move the pieces around, essentially creating their own designs. One such art-design box is currently on display in the Georges Pompidou Center in Paris.

Mazzanti's emphasis on engaging the public is evident in the project Mazzanti designed for the Milan Triennial in 2016: it was a wall made of cloth that became a shadow theater. "The whole idea was not to be static and rigid," Bravo said. "Some girls even kissed it."

I saw Mazzanti again at the final design review session for his advanced architecture studio course at Columbia University in New York in mid-December. Together with his colleague, Carlos Medellin, the firm's Research Foundation Director, he was teaching a unique workshop on Space and Programmatic Anomalies: Barranquilla A Dual City: Public Infrastructure As a Strategy.

The class traveled to Barranquilla, Colombia for nine days where they researched the social needs of their clients, meeting first with officials from the offices of social management, water forum, culture, education, health and sports. Their first exercise was to design a "toy" which could help them interact with the people. One team, for example, created an outdoor veiled confessional booth where people would enter and hang their hopes and fears on strings. While inside, they could also read, in privacy, what other people wanted.

The play as strategy concept was subsequently to be incorporated into the team's design for Barranquilla, a cultural metropolis, a city where a large number of people were displaced by the drug wars. They were given a site in a low income neighborhood that was near the river and near new developments.

The teams faced eight tough jurors in addition to Mazzanti and Medellin. A proposal to build a multi-layered traffic circle to house sports facilities to correct a traffic jam generated a lively critical response. What about car pollution, one juror asked? What about public transport, asked another? Why not transform the highway into a horse track, asked a third? Could the river be an actor in the design, asked a fourth?

Mazzanti sat in the front row listening intently. Finally, he spoke: You've put too many different activities here. In Colombia, people love street soccer. For that, you don't even need a field."

Words of wisdom from an architect whose current focus is how to rethink buildings for new relations. "The most important topic in Colombia today is how we resolve conflict in a new way. Architects have to stop waiting and assume a more positive role," Mazzanti said. "We must have the capability to propose new programs and building types--buildings that will become symbols of the new Colombia." 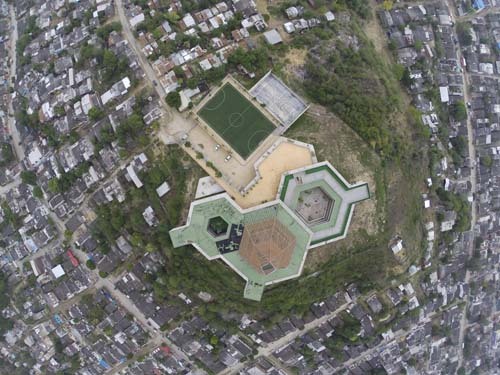 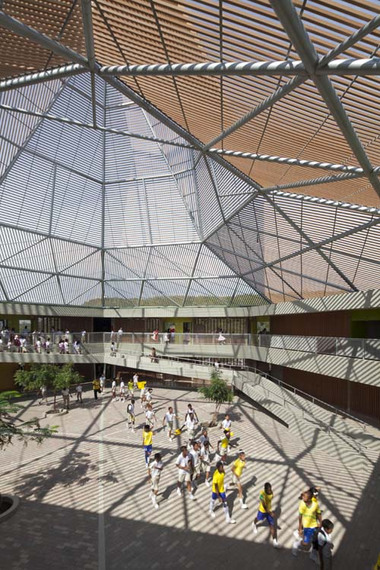 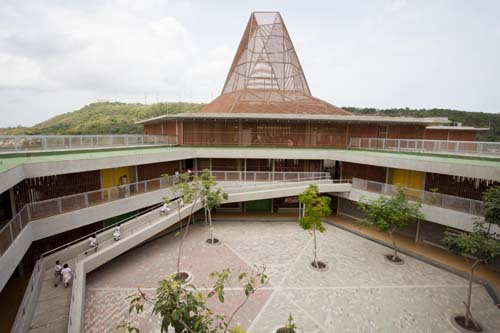 Side Courtyard in Cartegena School. Photo by Sergio Gomez 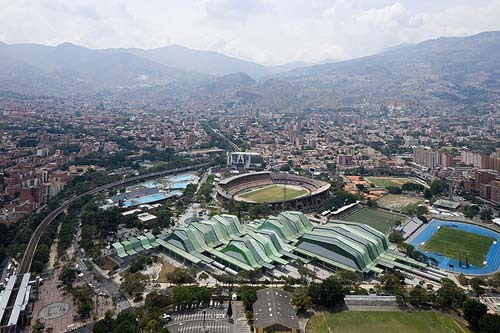 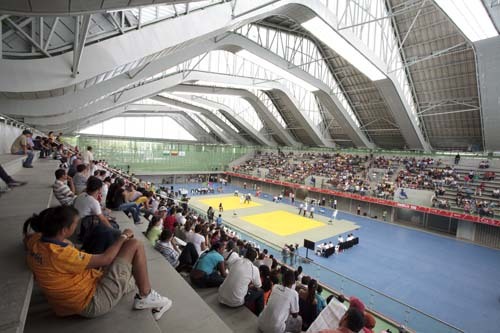 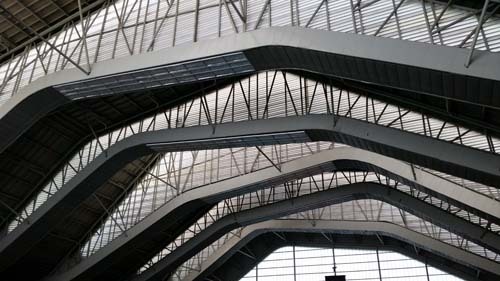 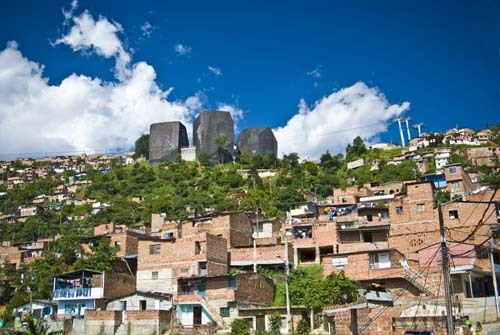 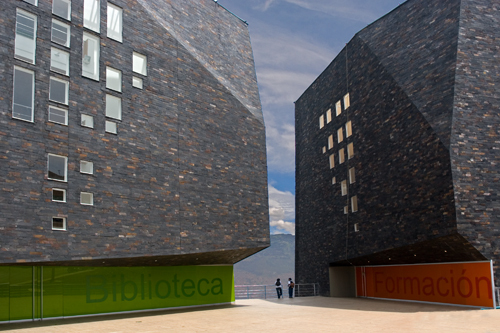 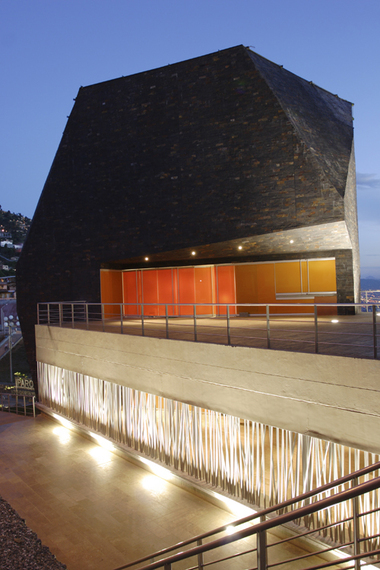 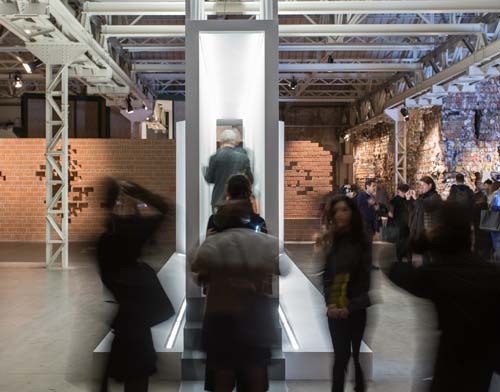 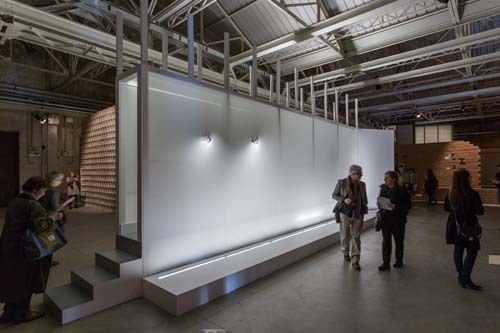 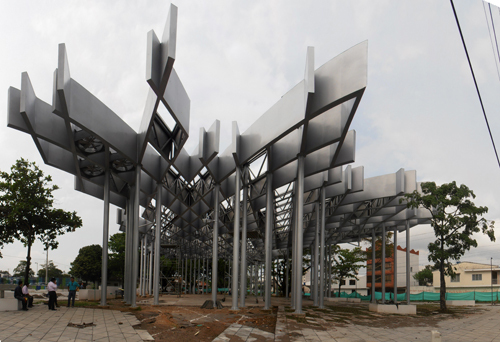