The record loss of Arctic sea ice this summer will echo throughout the weather patterns affecting the U.S. and Europe this winter, climate scientists said on Wednesday, since added heat in the Arctic influences the jet stream and may make extreme weather and climate events more likely.

The “astounding” loss of sea ice this year is adding a huge amount of heat to the Arctic Ocean and the atmosphere, said Jennifer Francis, an atmospheric scientist at Rutgers University in New Jersey. “It’s like having a new energy source for the atmosphere.” Francis was one of three scientists on a conference call Wednesday to discuss the ramifications of sea ice loss for areas outside the Arctic. The call was hosted by Climate Nexus. 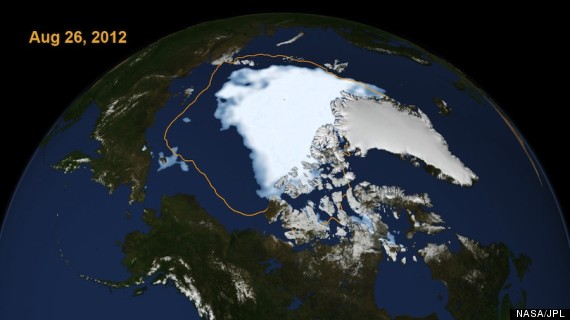 The extent of Arctic sea ice on Aug. 26, 2012, the day the sea ice dipped to its smallest extent ever recorded in more than three decades of satellite measurements. The line on the image shows the average minimum extent from the period covering 1979-2010. Click on the image for a larger version. Credit: NASA/JPL.

On August 26, Arctic sea ice extent broke the record low set in 2007, and it has continued to decline since, dropping below 1.5 million square miles. That represents a 45 percent reduction in the area covered by sea ice compared to the 1980s and 1990s, according to the National Snow and Ice Data Center (NSIDC), and may be unprecedented in human history. The extent of sea ice that melted so far this year is equivalent to the size of Canada and Alaska combined.

The loss of sea ice initiates a feedback loop known as Arctic amplification. As sea ice melts, it exposes darker ocean waters to incoming solar radiation. The ocean then absorbs far more energy than had been the case when the brightly colored sea ice was present, and this increases water and air temperatures, thereby melting even more sea ice.

Peter Wadhams, the head of the polar ocean physics group at the University of Cambridge in the U.K., told BBC News on September 6 that the added heat from sea ice loss is equivalent to the warming from 20 years of carbon dioxide emissions. Carbon dioxide is the main greenhouse gas that is causing manmade global warming.

During the fall, when the sun sets once again and the Arctic Ocean begins to refreeze, the heat in the ocean gets released back into the atmosphere. Since the jet stream, which is a corridor of strong winds at upper levels of the atmosphere that generally blows from west to east across the northern mid-latitudes, is powered by the temperature difference between the Arctic and areas farther south, any alteration of that temperature difference is bound to alter the jet stream — with potentially profound implications. It just so happens that the jet stream steers day-to-day weather systems.

Francis published a study last year in which she showed that Arctic warming might already be causing the jet stream to become more amplified in a north-south direction. In other words, the fall and winter jet stream may be getting wavier. A more topsy-turvy jet stream can yield more extreme weather events, Francis said, because weather and climate extremes are often associated with large undulations in the jet stream that can take a long time to dissipate.

“We know that certain types of extreme weather events are related to weather that takes a long time to change,” Francis said.

While there are indications that the jet stream is slowing and may be more prone to making huge dips, or “troughs,” scientists have a limited ability to pinpoint how this will play out in the coming winter season.

“The locations of those waves really depends on other factors,” Francis said, such as El Niño and a natural climate pattern known as the Arctic Oscillation. “I can only say that it’s probably going to be a very interesting winter,” she said.

Francis’ work has linked Arctic warming to the unusually cold and snowy winters of 2009-10 and 2010-11, during which the U.S. East Coast and parts of Europe were pummeled by fierce winter storms and experienced cooler-than-average conditions. The winter of 2011-12 was much milder, by comparison, but Francis said it, too, was consistent with her research. Not all meteorologists agree on the Arctic connection theory, but that may change with time.

Jim Overland, an oceanographer at NOAA's Pacific Marine Environmental Laboratory, said the inconsistency of the past three winters doesn’t mean the Arctic connection hypothesis is invalid.

“People like direct causality, [the notion that] if you lose the ice every year it will cause the same effect,” Overland said. But the chaotic nature of the atmosphere means that all that scientists can say with a high degree of confidence is that “the number of [extreme] events somewhere are destined to increase” as a result of rapid Arctic climate change, Overland said.