Microbes living at the edges of Arctic ice sheets could help researchers pinpoint evidence for similar microorganisms that may have evolved on Mars, Jupiter's moon Europa or Saturn's moon Enceladus, researchers say.

Scientists are investigating the receding edge of ice sheets on Earth to study the release of methane there.

Methane is a colorless, odorless, flammable gas. On Earth, some methane is produced abiotically — not by life — through reactions between water and rock, as well as through the breakdown of hydrocarbons by geological processes.

On the other hand, some methane comes directly or indirectly from methanogenic microbes, as a byproduct of fermentation of acetate — a derivative of vinegar — into methane and carbon dioxide. 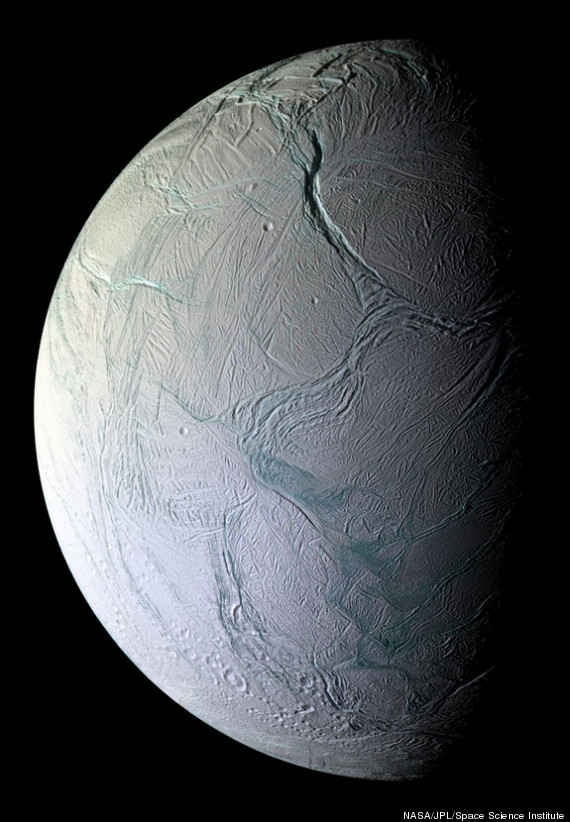 NASA's Cassini spacecraft has been studying Saturn and its moons since it entered orbit in 2004. This image, taken on Oct. 5, 2008, is a stunning mosaic of the geologically active Enceladus after a Cassini flyby.

"It is increasingly clear that on Earth, there are cold-adapted methanogenic microbes in Arctic, Antarctic and sea-bottom settings," said Jeffrey White, an environmental biogeochemist at Indiana University. "Acetate fermentation is the principal pathway accounting for as much as 95 percent of methane production in these cold environments." [Extremophiles: World's Weirdest Life]

Similar ice sheets exist elsewhere in the solar system, such as the buried water ice glaciers in the Hellas Basin region on Mars. The plan is to see what methods can best determine whether the sources of any such methane are biological or not.

Methanogenic microbes rely on a community of microorganisms that provide the acetate and other simple molecules they consume. If such communities evolved in the cold corners of Earth, "it seems reasonable to search for evidence of similar biological processes on other icy bodies in our solar system," White said.

Such objects include Enceladus and Europa — moons of Saturn and Jupiter, respectively — both of which are thought to harbor oceans of liquid water beneath their icy shells. 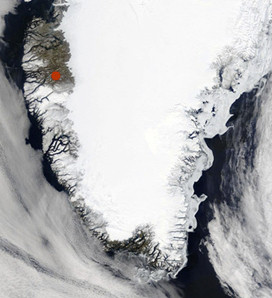 Satellite photo showing the southern portion of the Greenland ice sheet. The red dot marks Kangerlussuaq, the base of operations for the researchers.

To analyze these microbes and their methane emissions, White and his colleagues recently went to Greenland as part of a $2.6 million NASA ASTEP (Astrobiology Science and Technology for Exploring Planets) grant.

The researchers investigated the western edge of the Greenland ice sheet, "one of the most readily accessible margins of a large ice sheet on Earth," White said. "The relatively manageable logistics and climate in Greenland compared to Antarctica made this area an excellent choice."

Careful analysis of the isotopes making up methane can shed light on its origins. Isotopes are variants of elements. All isotopes of an element have the same number of protons in their atomic nuclei, but each has a different number of neutrons. For instance, atoms of carbon-12 each have six neutrons while atoms of carbon-13 have seven.

The available data suggest that methane from microbial reactions is substantially richer in lighter isotopes at 20 to 40 parts per thousand than abiotic methane, explained researcher Lisa Pratt, an astrobiologist and geomicrobiologist at Indiana University.

In 2011, the researchers used an infrared laser to look for methane at multiple sites across a valley that extends for tens of miles near the margin of the Greenland ice sheet. Measurements were taken about 6 feet (2 meters) above the soil surface for 1 to 4.5 hours each time.

Methane was spotted at several lakes and wetland areas. However, the methane levels seen were very close to what would be detected from normal atmospheric levels at ice margins in Greenland. Their next measurements will be taken at heights just above the soil surface to better distinguish local sources of emission.

So far, the researchers have been surprised by how much biology and biogeochemistry can vary across several small lakes arrayed along a single valley near the ice margin.

"If life was widespread during an early period on Mars when small lakes were common, we need to approach sampling with the expectation that pronounced variation in biological markers could occur even over distances as small as 100 meters (330 feet)," Pratt said.

In the coming summer, the researchers intend to look for potential subsurface gaseous signs of life with an innovative drill they have developed. The device allows rapid transfer of unaltered gas samples from drilled boreholes directly into analytical instruments.

A similar instrument could one day find use in planetary exploration, Pratt said.