This week, President Obama became the first sitting president to visit the Alaskan Arctic and his trip shone a welcome spotlight on the urgency of combating climate change. He visited melting glaciers and eroding villages and danced with school kids north of the Arctic Circle, but he was dogged at every step by questions about his recent approval of Shell Oil's Arctic drilling plans.

Obama has done more than any previous president to restrict greenhouse gas emissions, but his administration remains stuck in a contradictory policy of promoting fossil fuel extraction that threatens to "lock-in" decades of emissions that we can't afford.

In response to these criticisms, Obama administration officials and supporters, have tried to separate oil drilling from climate change. Senior White House advisor Brian Deese "caution[ed] against characterizing" Arctic drilling as undermining Obama's climate goals and highlighted the continued need for domestic oil production during the "transition off fossil fuels." Secretary of State John Kerry echoed this point, stating "Shell and other companies are going to be drilling somewhere over the course of these next years, because we're not going to suddenly be weaned from oil." 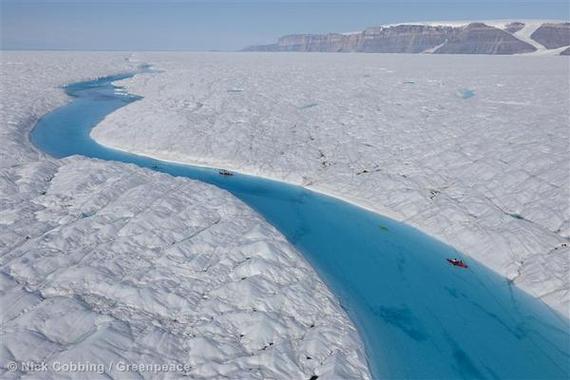 Arctic Oil Is Not a Transition Fuel

While it is true that the U.S. won't be able to quit oil use overnight, oil extracted from beneath the Arctic Ocean is no "transition" fuel. Arctic oil is likely to be an expensive proposition and even Shell admits that any oil found in the Chukchi Sea won't reach market until the 2030s and the fields will have to produce for decades in order to recoup the initial investment. A recent report put out by Oil Change International and Greenpeace entitled Untouchable makes the case that Arctic oil drilling is simply incompatible with President Obama's climate goals.

There is a maximum amount of greenhouse gases we can emit if we are to have a chance of limiting global warming to 2°C, and with every passing year of inaction this "carbon budget" gets smaller and smaller. If we don't change course, the budget will be exhausted by 2040. The hard fact is that oil companies have already discovered more oil reserves than we can safely burn. Any new Arctic discoveries would be in addition to those existing reserves and would be less economical due to a short drilling season, harsh environmental conditions and high transportation costs.

It is difficult to say for certain what the "breakeven" price will be for Shell's offshore projects. When production costs are compared across projects, Arctic oil is the most expensive. Shell's Ann Pickard has claimed that oil from the Chukchi would be "competitive" at $70/barrel, but some analysts estimate that it would only make economic sense if prices were greater than $100/barrel. An influential database from Rystad Energy "models a breakeven price of between $150 and $250 per barrel for various fields in the U.S. Arctic OCS." Oil is currently trading at under $50/barrel. The International Energy Agency has published future scenarios for oil production, and in its Current Policies scenario the price of oil does reach $150/barrel sometime in the mid 2030s. Unfortunately, that scenario predicts a disastrous temperature rise of 5.3°C.

For these reasons, a recent study published in Nature found that 1/3 of all existing oil reserves must be left in the ground and that 100% of Arctic oil was "unburnable" in a 2°C scenario. Any scenario in which we are filling our gas tanks with Arctic oil is one where we have blown past the 2° limit and are well on our way to 3, 4 or even 5°C of warming.

In a very real sense, Shell is betting on the failure of the climate negotiations and continued warming. In a letter to investors, Shell says as much: "Both our scenarios and the IEA New Policies Scenario (and our base case energy demand and outlook) do not limit emissions enough to be consistent with the back-calculated 450 ppm 2°C scenario. We also do not see governments taking the steps now that are consistent with the 2°C scenario." 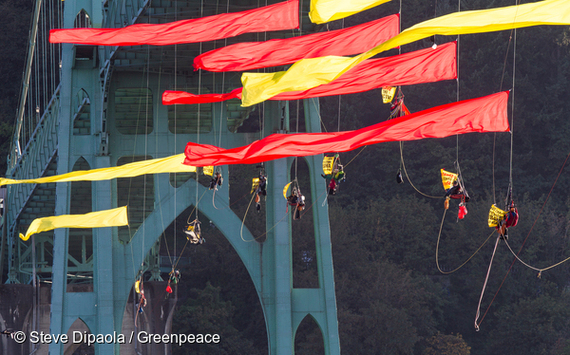 President Obama has enacted a number of important policies -- such as stronger fuel efficiency standards and the Clean Power Plan -- that chip away at the demand for fossil fuels, even as he has continued policies that expand their supply. This is a big contradiction, but some commentators have put forth the idea that it is "futile" to try to halt the growth of fossil fuel supply because markets will adapt to replace that supply somewhere else, cancelling out any emissions reductions.

That argument is thoroughly dismantled in this highly recommended post from Oil Change International. As the post makes clear, the economic argument about futility is on shaky grounds. In normal markets, expanding supply leads to lower prices and hence greater consumption (and greater emissions). The story goes that oil markets don't work like that because major players like OPEC have used their cartel power to keep overall production and prices steady. But the events of the past year show that OPEC has abandoned that strategy and the oil market has in fact responded to increased supply by dramatically lowering prices.

Fossil fuel extraction projects involve high up-front costs that can "lock-in" dirty energy infrastructure for decades. Once that infrastructure is built, the marginal costs to pump the next barrel of oil are relatively small. This means that once a project is started it can be very hard to get rid of because oil companies will fight to recoup their investment by pumping oil for decades. Therefore the time to stop misguided oil projects is now, before critical investments are made.

Most importantly, campaigns against fossil fuel supply have helped build a powerful movement for climate justice that is already achieving real policy changes. A movement of people concerned with fracking, oil trains, coal exports, tar sands pipelines, Arctic drilling and more have taken to the streets (and waterways) in recent years to demand a faster transition to a cleaner and more just economy.

At the end of the day, Shell is an enormous oil company trying to maximize their profits. A big discovery in the Chukchi would be good news for their stock price but bad news for the rest of us. In Alaska, President Obama called on the nations of the world to do more to tackle climate change. It would take strong leadership to pledge to end nonsensical extraction of federal fossil fuels, but such a move is within the President's power and would greatly strengthen the message he takes to the Paris climate talks this fall.