Tons of carbon and methane lie under the Arctic tundra, trapped in ice. The frozen ground, called permafrost, covers nearly a quarter of the Northern Hemisphere.

Global warming is thawing patches of permafrost, releasing carbon dioxide and methane — both greenhouse gases — into the atmosphere. An airborne NASA mission called CARVE (Carbon in Arctic Reservoirs Vulnerability Experiment) is tracking the gas emissions to better estimate their impact on climate change.

"Permafrost soils are warming even faster than Arctic air temperatures, as much as 2.7 to 4.5 degrees Fahrenheit [1.5 to 2.5 degrees Celsius] in just the past 30 years," Charles Miller, a research scientist at NASA's Jet Propulsion Laboratory in Pasadena, Calif., said in a statement. "As heat from Earth's surface penetrates into permafrost, it threatens to mobilize these organic carbon reservoirs and release them into the atmosphere as carbon dioxide and methane, upsetting the Arctic's carbon balance and greatly exacerbating global warming," said Miller, principal investigator for the five-year mission. 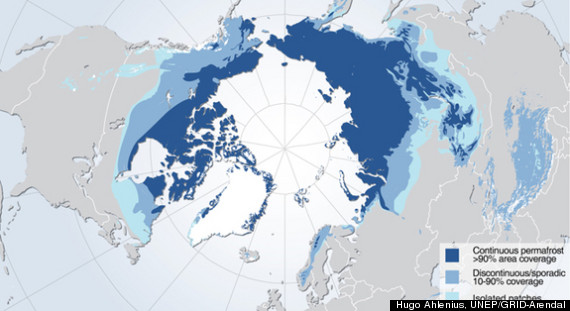 Skimming just 500 feet (150 meters) above the Alaskan tundra in a C-23 Sherpa plane, researchers will use radar and gas sensors on the aircraft to measure soil moisture, surface temperature and gas emissions while the permafrost melts.

Results from the first year of experiments, collected in 2012, revealed very different patterns of methane and carbon dioxide release than expected based on models, Miller said. On the eastern Yukon River, in the Innoko Wildnerness, methane levels over swamps were 650 parts per billion (ppb) higher than normal background levels. "That's similar to what you might find in a large city," he said. (Parts per billion means that for every billion molecules in the atmosphere, 650 of them are methane, in this particular case.)

Which gas is getting emitted makes a difference in the effects on global warming. Methane gas doesn't linger in the atmosphere for as long as carbon dioxide, but it's better at trapping energy. As a greenhouse gas, methane is 22 times more powerful than carbon dioxide.