SAN FRANCISCO — Global warming is rapidly driving the Arctic into a volatile state characterized by massive reductions in sea ice and snow cover, more extensive melting of the Greenland ice sheet, and a host of biological changes, according to a comprehensive report published by the National Oceanic and Atmospheric Administration (NOAA) on Wednesday.

The seventh annual “Arctic Report Card” summarizes the latest scientific observations in the fastest-warming region on Earth. Members of the international team that produced the report said Arctic climate change is likely to have broad and sweeping repercussions well outside of the Far North. 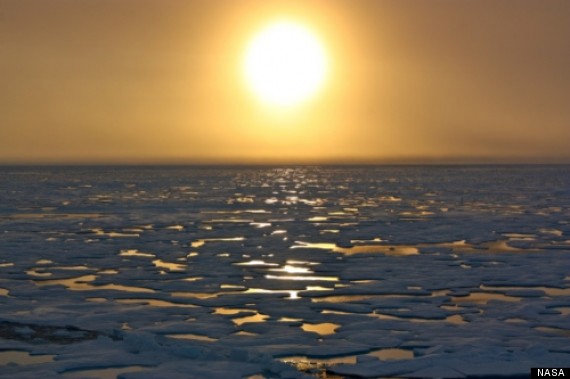 Studies show that the decline in Arctic sea ice is largely a consequence of rising amounts of manmade greenhouse gases in the atmosphere, such as carbon dioxide. Projections show that, assuming little action is taken to slow global warming, the Arctic Ocean may be essentially free of summer sea ice in as little as a decade, although other scientists maintain that won't occur until the 2040s or 2050s. Credit: NASA

“What happens in the Arctic doesn’t always stay in the Arctic,” said NOAA Administrator Jane Lubchenco during a press conference here at the annual meeting of the American Geophysical Union.

The Arctic plays a key role in regulating the Earth’s climate system, since the bright white land and sea ice reflects an enormous amount of incoming solar energy back to space. However, as sea ice and land ice melt, they expose darker surfaces below, and these surfaces absorb more solar energy, leading to warming. This process, through which Arctic warming feeds upon itself and accelerates, is known as Arctic amplification.

Scientists who contributed to the report described an Arctic that may already have passed a key threshold into a new state, in which even modestly warm years have major impacts. “If we are not already there, we are surely on the verge of seeing a new Arctic,” said Don Perovich, a researcher at Dartmouth University and an expert on sea ice.

“The Arctic acts as a thermostat for the global climate,” he said. “We can expect to see Arctic change have global environmental and socioeconomic consequences.” 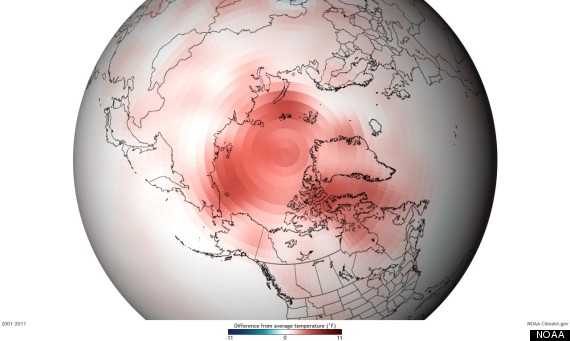 Departure from average of Arctic surface temperatures during the first decade of the 21st century, as compared to the 1971-2000 average. This map illustrates that no part of the Arctic experienced cooler than average conditions during this period. Credit: NOAA

Since the report card effort began in 2006, each iteration has issued more shrill alarms about the pace and extent of the changes taking place in the Arctic. This year’s report is noteworthy for what it says about the acceleration of climate change in the Far North.

Despite air temperatures that averaged nearly equal to the average for the past decade -- which is warmer than the 30-year average -- 2012 saw the most extensive loss of Arctic sea ice ever seen in the 33-year satellite record. When the melt season finally ended in late September, the Arctic Ocean managed to hold onto less than half of the average sea ice extent seen during the 1979-to-2000 period.

The past six years have had the six smallest sea ice extents since 1979, indicating that the ice has not recovered from the previous record low in 2007. Researchers attribute this to the loss of thicker multiyear ice, which has been replaced by thinner ice that forms in the fall and melts in the spring and summer.

This year also saw a record low spring snow cover in North America and Eurasia, and the rate of snow cover loss in springtime has been even faster than the rate of sea ice loss, according to Martin Jeffries, one of the report’s editors.

The loss of spring snow cover affects the length of the growing season, the timing and dynamics of spring river runoff, permafrost thawing, and wildlife populations. This was the third time in five years that North America saw a record-low spring snow cover, and the fifth year in a row that Eurasia has.

Warmer air temperatures have played a large role in driving this trend, since during the past decade no part of the Arctic has been cooler than the 30-year average.

Record-high Arctic permafrost temperatures were observed in the North Slope of Alaska and in the Brooks Range, where measurements began in the late 1970s. Permafrost, which is a permanently frozen layer of ground, holds vast quantities of organic matter that should the ground melt will begin to decay, slowly releasing more greenhouse gases into the atmosphere. A recent study suggests that this process will boost global warming by up to half a degree Fahrenheit by 2100, although there is considerable uncertainty surrounding the rate and extent of permafrost melt.

This year also saw a rare melt event in Greenland when 97 percent of the Greenland ice sheet -- including the normally frigid high-elevation areas -- experienced some degree of melting. That was the first time that melting was documented at the highest elevations of the ice sheet, according to report coauthor Jason Box of Ohio State’s Byrd Polar Research Institute. “2012 was an astonishing year,” he said, noting that it was the warmest summer in 170 years.

As was first reported by Climate Central, the reflectivity of the ice sheet reached an all-time low in a period of record that dates back to 2000. Unusually low reflectivity is an indication that the ice was absorbing more solar radiation than it typically does, and was more prone to melting.

Land ice, like sea ice, acts as a giant mirror, reflecting incoming solar radiation back into space. “That mirror is breaking,” Perovich said.

Scientists are keeping an especially close eye on the Greenland ice sheet, since it is a critical player in determining how much sea levels rise as the planet continues to warm. Greenland is the world's largest island, and it holds 680,000 cubic miles of ice. If all of this ice were to melt -- a highly unlikely scenario anytime soon -- the oceans would rise by more than 20 feet.

Arctic ecosystems are already responding to the shifting climate, with large phytoplankton blooms seen in newly opened waters, and an increase in the number and productivity of plants on land. An index of green vegetation shows increases of 15.5 percent in the North American Arctic, and 18.2 percent in the Eurasian Arctic. In Eurasia, the growing season lengthened by 30 days between 2000 and 2010. 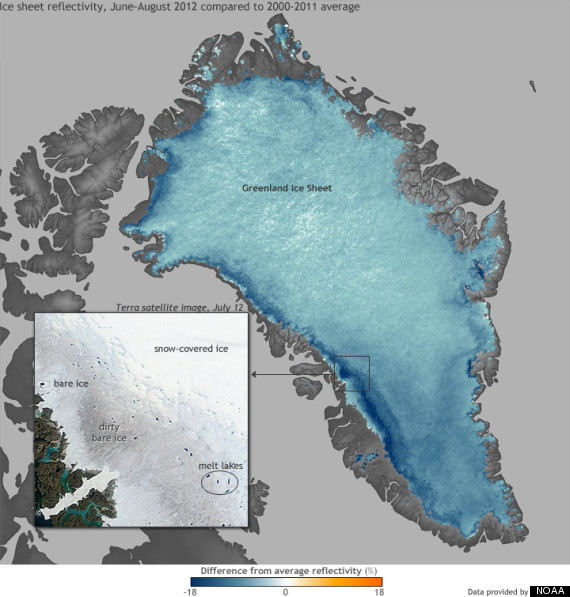 The map shows the percent of incoming sunlight Greenland reflected during June through August 2012 compared to the average of summers from 2000-2011. Blue indicates less sunlight reflected than average, with dark blue indicating nearly 20 percent less sunlight than average reflected back into space. The darkest areas occurred around the perimeter of the island — the lowest elevations, where melting is most significant — but virtually the entire ice sheet showed below-average reflectivity. Credit: NOAA

In addition, a combination of greater vegetation and an increase in summertime thunderstorms has led to more Arctic wildfire activity. Such fires deposit darkly colored soot onto sea and land ice, hastening summertime melt even further.

Given the extreme weather that has affected the Northern Hemisphere during the past several years, particularly in Europe and the U.S., there is increased attention on how Arctic climate change may be influencing weather in the mid-latitudes. Recent studies have shown that a warmer Arctic may lead to bigger dips in the jet stream, which can cause weather systems to stall for longer periods, creating long-lasting cold snaps or heat waves, and potentially intensifying storm systems.

A massive dip in the jet stream, accompanied by an unusually strong “blocking” high pressure center over Greenland, helped steer Hurricane Sandy into New Jersey, which was consistent with broad patterns shown in such studies.

“The jury is still out with respect to the relationship between Superstorm Sandy and climate change,” she said. “I think what scientists would all agree on is that all storms that are happening today are happening in a climate-altered world.”

James Overland, a researcher at NOAA who has published several studies on the connections between Arctic warming and extreme weather events, said the added heat in the Arctic is influencing mid-latitude weather, but the chaotic nature of that weather makes it difficult to determine its exact impacts.