The skin of sea ice that covers the Arctic Ocean has reached its maximum extent for 2013, the National Snow and Ice Data Center announced Monday, and the annual melt season has begun. As of March 15, ice covered 5.84 million square miles of ocean, the sixth-lowest since satellite observations began in the 1970’s, and 283,000 square miles lower than the 1979-2000 average. Reflecting the influence of global warming, the 10 lowest sea ice maximums have all occurred over the past 10 years.

Last summer’s ice minimum, moreover, was the lowest on record, with 2007 coming in a distant second. Taken together, it’s one more sign that the planet is warming under the influence of heat-trapping greenhouse gases.

The Arctic is warming especially quickly, however, thanks to a sort of vicious cycle that operates between ice, ocean and sunlight. When the sea is covered with bright, reflective ice, incoming sunlight bounces back into space. When the darker water underneath is exposed, some of the Sun’s energy is absorbed, heating the seawater. That warms the air in turn, increasing the melting and exposing even more dark seawater to the incoming sunlight, and so on.

This feedback cycle, known as Arctic amplification, triggered by warming temperatures, has been reducing ice cover more or less steadily for the past 40 years, at least. This sea ice decline may be impacting areas well outside the Arctic Circle, by setting in motion a chain of events that lead to altered weather patterns in the Northern Hemisphere, favoring some types of extreme weather events.

The ice returns every winter — and in fact, this winter’s ice growth has been greater than ice experts have seen. But that’s only because last summer’s meltback was so drastic, leaving more open water to freeze. And unlike the thick, multi-year ice that once covered much of the Arctic, this new, seasonal ice cover is very thin, making it prone to rapid melting as the Sun emerges after the months-long winter night.

The thin sea ice is also more prone to cracking when under strain from strong winds or currents. In late February and early March, large fractures were observed in the sea ice cover off the north coast of Canada and Alaska, an event that experts called unusual given the area that was affected.

“That entire region is largely covered by seasonal ice, not multiyear ice, and that’s a real different ice pack than what we used to have,” said Walt Meier, a research scientist at the National Snow and Ice Data Center in Boulder, Colo.

Meier said that thin sea ice is now covering the North Pole itself, which is typically capped by thick ice that survives multiple melt seasons. This is only the second time in the 35-year satellite record that this has happened. The first time was in 2008, following the previous record-low ice extent.

“The amount of hard, thick ice has just collapsed. There are now just remnants of it,” said retired Rear Adm. David Titley, an expert in Arctic climate policy, during a conference call with reporters. “So far, we see no evidence that it’s coming back.”

In recent years, sea ice volume, which includes a measure of ice thickness, has been declining at an even faster rate than sea ice extent. 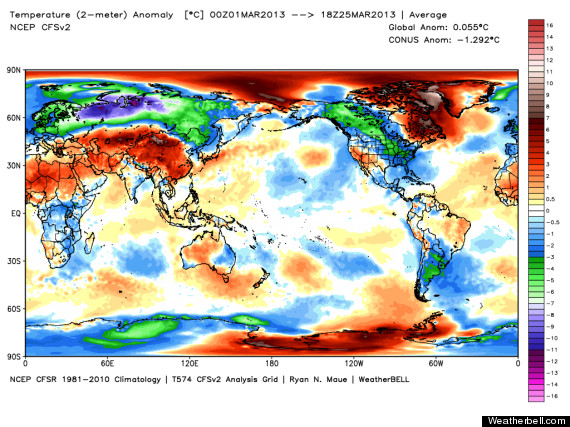 Average surface temperature anomalies during March 2013. It illustrates the influence of the very strong high pressure area over Greenland, with above average air temperatures there (orange and red) and colder than average conditions in the U.S. and Eurasia. Click on the image to enlarge. (Credit: Weatherbell.com)

Titley said the Arctic does not exist in a “vacuum,” and that changes in the Far North will affect countries far to the south. For example, some studies have shown that a warming Arctic has already had a ripple effect on the world’s weather, contributing to outbreaks of cold and stormy weather in parts of Eurasia and the Eastern U.S. in recent winters.

The snowstorms that have affected the U.S. and Europe this March may be an example of a growing Arctic influence in midlatitude weather. March has been an unusually cold and snowy month across a wide swath of the U.S. and Europe, thanks in part to a slow-moving, sprawling area of High pressure above Greenland. While surface air temperatures have been running well above average in Greenland and northeastern Canada, cold Arctic air has surged into the mid-latitudes, effectively delaying spring’s arrival by several weeks in the Midwest and East Coast.

This type of weather pattern, with a sharp and persistent deviation in the west-to-east flow of air that steers weather systems across the Northern Hemisphere, may be an indication that Arctic warming is already altering the weather in the mid-latitudes, said Steven Vavrus, a senior scientist at the University of Wisconsin-Madison.

Along with Jennifer Francis, a professor at Rutgers University, Vavrus is one of the principal proponents of the hypothesis that rapid Arctic warming is paradoxically causing colder and snowier winters in the mid-latitudes, along with increased bouts of other extreme weather events. Other researchers have expressed different views about how Arctic climate change is affecting the global climate system.

Vavrus said it’s not yet clear if the recent unusual weather pattern can be attributed to the loss of summer sea ice. “One thing that I think is useful is we can use examples like this winter . . . to look at how the climate system behaves,” he said.

Ultimately, scientists believe, the Arctic Ocean could be largely ice-free for much of the summer, a phenomenon that could happen as early as a decade or two from now. That could be good news for shipping companies, which are already looking to save money by taking an Arctic shortcut from Asia to Europe and back; NOAA, meanwhile, is revising its charts of Alaskan waters to help ships and boats navigate newly ice-free waters.

While that may be good for commerce, the heat-absorbing open water in an ice-free Arctic is likely to keep warming the region, leading to changes on land as well. The most worrisome: if the permanently frozen soil, or permafrost, in northern Alaska, Siberia and Canada thaws substantially, it could release massive amounts of carbon that has been deep-frozen for tens of thousands of years, adding an extra burst of heat-trapping greenhouse gases to the atmosphere and turbo-charging the rate of global warming.

As for what the 2013 winter ice maximum means for this summer’s ice minimum, it’s hard to make a prediction. Sea ice extent declined to the 9th-lowest on record in 2012, and the all-time summer low followed six months later. This year’s maximum is lower — but the vagaries of prevailing winds and ocean currents don’t mean we’ll necessarily end the summer with less ice than we did last year. It’s always possible that summer melting will be more moderate than it was in 2012 — after all, it took 5 years after the previous record, set in 2007, for the ice to hit a new low.

But it’s equally possible that Arctic sea ice will shatter last summer’s record. And if it doesn’t happen this year, it will come soon enough.

Editor's Note: This article has been updated to correct an error in the original story. In 2012, the maximum Arctic sea ice extent was the 9th-lowest on record, not the largest amount on record as originally stated.