Arctic sea ice cover is likely to reach a new record low as soon as next week, several weeks before the end of the melt season, according to data from the National Snow and Ice Data Center (NSIDC) and news reports. In fact, by at least one measure — sea ice area — the ice cover has already set a record low.

The rapid decline in Arctic sea ice during the past several decades is one of the most visible signs of manmade global warming. The Arctic is warming at nearly twice the rate of the rest of the globe, largely due to feedback loops that are unique to the climate of the Far North. What happens in the Arctic doesn’t stay in the Arctic, though. Recent research shows that the loss of sea ice cover may be contributing to extreme weather events throughout the Northern Hemisphere, and may be partly responsible for major cold air outbreaks and paralyzing snowstorms in the northeastern U.S. and western Europe during the past few years. 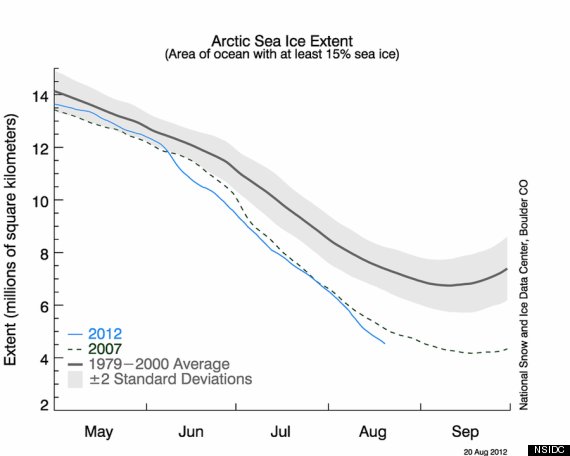 Arctic sea ice extent during the 2012 melt season, compared to recent melt seasons and the long-term average. Click on the image for a larger version.
Credit: NSIDC

According to the NSIDC, Arctic sea ice extent is currently tracking well below the level seen at this time during the record melt season of 2007, and is on track to set a record low as soon as next week, if recent trends continue. If this occurs, this would be well before the end of the melt season, which typically closes out in mid-September.

What’s particularly unusual is that instead of slowing down in August, which typically happens as summer begins to wane in the Far North, the rate of sea ice decline actually accelerated. This may be related to an unusually powerful summer storm that swept across the Arctic Ocean in early August, which may have helped break up thin sea ice cover, although its exact impacts are not yet fully known.

“I don't think the big storm that we have earlier this month had much of an effect,” said Mark Serreze, the NSIDC director. “The rapid loss of ice we've seen over the past few weeks has been in the East Siberian Sea (north of Eastern Siberia) and this ice was already posed to melt out, with or without a storm.”

Instead of the storm, Serreze pointed to the long-term thinning of the sea ice cover as the most likely culprit for this year’s precipitous decline in sea ice cover, since thinner sea ice is far more susceptible to melting during the summer months. 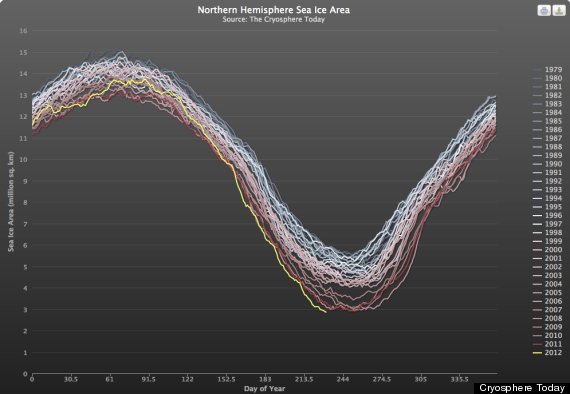 “While we still get plenty of ice growth during autumn and winter, the ice cover that we have in spring is thinner than it used to be," Serreze said. "It has gotten so thin now that large areas completely melt out in summer. We no longer need a "boost" from weather patterns favoring summer ice melt like we saw in 2007.”

The conditions that led to the 2007 record melt, including unusually warm air temperatures and sunnier than normal weather, plus winds and ocean currents that flushed sea ice out of the Arctic and into the North Atlantic, have been largely absent during this melt season.

According to a Reuters interview with Ted Scambos, an NSIDC researcher, sea ice extent could retreat to below 1.5 million square miles by the end of the 2012 melt season, which has never happened before in the observational record.

As Climate Central's Mike Lemonick reported last week on Arctic sea ice on pace for a record low, this new data confirms what scientists have been seeing for several years: the ice is thinning a lot faster than climate models originally predicted, which in the end, could accelerate the warming of the entire planet. Open water will warm the ocean itself, which could undermine the glaciers on nearby Greenland. The generally warmer conditions could also speed the melting of permafrost on land in Alaska, Canada and Russia. That could release extra heat-trapping carbon dioxide into the atmosphere, which would further turbo charge global warming. So could the release of methane as plant material decays in soggy marshes, or escapes from hydrate deposits on the sea floor.

The NSIDC describes the difference between sea ice extent and area in the following way: "A simplified way to think of extent vs. area is to imagine a slice of swiss cheese. Extent would be a measure of the edges of the slice of cheese and all of the space inside it. Area would be the measure of where there is cheese only, not including the holes. That is why if you compare extent and area in the same time period, extent is always bigger." NSIDC scientists maintain that sea ice extent is a more accurate metric because of the way satellites measure sea ice that is in the process of melting.

Still another way to gauge the state of the sea ice, one which Serreze said provides crucial information about sea ice health, is through measurements that take into account sea ice thickness. Right now, sea ice volume data is also running below record levels for this time of year, but it has not yet reached an all-time low.

The absence of sea ice has boosted interest in Arctic shipping and oil and gas resource exploration. For example, a Chinese icebreaker recently became the first Chinese ship to cross the Arctic Ocean via the Northern Sea Route which runs along the northern shores of Russia. The decline of sea ice cover may open up lucrative seasonal shipping routes.