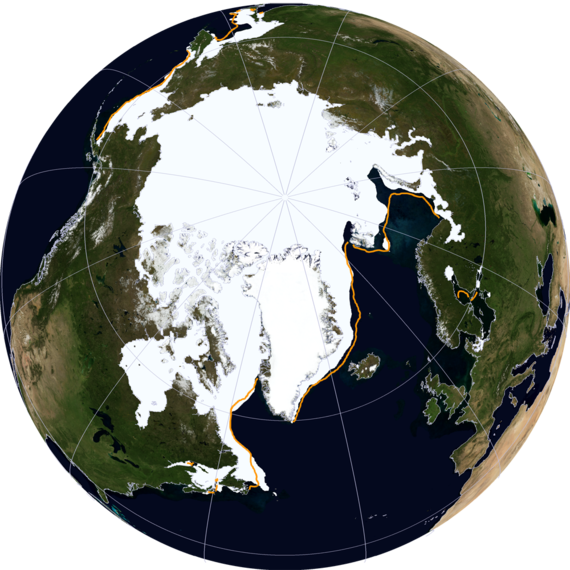 Each September in recent years, Arctic sea ice becomes news. Why September? It's the month when the summertime ice melt maxes out and the extent of ice covering the Arctic sea reaches its annual minimum. Why is it news? Because over the past few decades, with global temperatures steadily rising, the minimum sea ice extent has been dropping precipitously.

And that drop, depending upon your point of view, can be good news or bad news.

If you're into shipping and natural resource extraction, you're quite likely delighted -- the melting opens the Arctic Sea to navigation and the entire area to oil and natural gas drilling. (More on this here, here and here [pdf].)

If you're concerned about climate change, you're none too happy, because melting sea ice sets up the potential for dangerous climate feedbacks and may even be contributing to harsher winters for many Americans. (See also here and here.) Count me among the latter group. 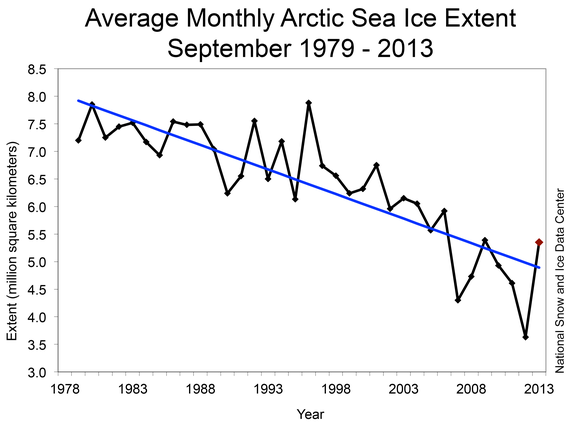 Sea ice extent from one year to the next has jogged up and down, but the long-term trend is clear: it's downward and dropping more steeply. From 1979-2001, the September minimum had dropped by about 7 percent per decade whereas the trend from 1979-2013 marks a loss of 14 percent per decade.

If you're concerned about the change in sea ice, tracking the minimum over time tells a compelling story. But it's not the complete story. The sea ice minimum is just one of several metrics that bear paying attention to for the state of Arctic. Do those other metrics tell the same story? Let's take a look.

While September generally marks the time when sea ice hits its minimum, March generally corresponds to the month of maximum extent -- when freezing ends and melting begins. Like the minimum trend, the trend for maximum sea ice is also down, but the decrease is not nearly as marked as that of the minimum: about a 2.6 percent decline per decade. Why is the trend less? It probably has something to do with the trends in the length of the melt season and the thickness of the ice.

2. The Length of the Melt Season

A paper by Julienne Stroeve of the National Snow and Ice Data Center and colleagues published in the journal Geophysical Research Letters in February suggests that one of the reasons the area covered by sea ice at the end of the melt season is shrinking is that the length of the melt season is growing. The authors report: "The Arctic-wide melt season has lengthened at a rate of 5 days decade from 1979 to 2013."

If you follow sea ice, you know that the thickness and age of the ice are important for ice longevity. (See discussions here, here and here.) Thin ice, usually comprised of ice that formed during a single winter freeze season (referred to as seasonal ice), easily melts and is therefore unlikely to survive a melt season. Multi-season ice, which is thicker and more resilient, is able to survive a melt season. (Because ice thickness is difficult to measure, scientists use a variety of methods to evaluate it.)

What's Happening in the Arctic Now That Winter's Over?

This year's maximum extent on March 21 was a bit later than the average -- sea ice typically peaks around March 9. The melt was delayed by a late cold weather pattern that increased both the length of the winter season and the extent of the ice creating conditions conducive for a significant uptick in ice growth mid-month.

The good news is that more thicker, multi-year ice appears to have survived the 2013 melt season (see chart) with a 10 percent increase. Does that portend more ice present in the Arctic when this year's melt season draws to a close? That's not clear.

What's the Scoop on Ice Extent This September?

A new study by Julienne Stroeve of the National Snow and Ice Data Center and colleagues published in Geophysical Research Letters two weeks ago suggests current methods tend to get the job done when the ice melt is close to the expected trend, but that predictions are less accurate during anomalous years. The reason: The predominance of thin, seasonal ice, which is more responsive to the small shifts in weather. Arctic winds move it more readily -- causing it to spread or shrink by piling the ice against coastlines or by pushing the ice out of the Arctic altogether.

Thinner ice is also more susceptible, Stroeve found, to bouts of warm weather such that a small rise in temperature can dramatically reduce ice extent. Taken together, an Arctic system dominated by thin, young ice is less predictable because of the dramatic impact of weather superimposed on the warming-induced melting that is already occurring.

However, a paper published yesterday in the journal Nature Climate Change by David Schroder of the University of Reading and colleagues argues "the Arctic sea-ice minimum can be accurately forecasted from melt-pond area in spring."

Melt ponds are areas of water overlying the ice that form as the ice begins to melt. Because the ponds are less reflective than the ice, they absorb more radiation from the Sun and accelerate the melting process. The authors find a strong correlation between the areal/arial extent of melt ponds over the month of May and the minimum sea ice extent in September. They also find that melt pond extent is a far better predictor of the September minimum that ice thickness. And incidentally, in case you were wondering: melt pond extent has more than doubled since the 1980s.

So is sea ice dwindling? Choose your metric and the answer's the same. Yes, it is.

But what about the question posed in the post's headline: How low will the ice go this year? The fact that there is more thick ice this spring might suggest to some that the minimum this September will be less severe than last year, but Stroeve's work suggests that we really don't know and we'll have to wait until September. Schroder's findings on the other hand suggest that we could have a pretty good idea at the beginning of June.

* Unlike extent, satellites can't record continuously sea ice volume (extent x thickness). It's an important metric because melting occurs both in extent and thickness. For example even though 2007 was a dramatic melt year with the summer minimum reaching a new low for extent, the volume of ice was still higher than subsequent years that had higher sea ice extents because there was more thicker, older ice in 2007 (compare 2010 and 2011 with 2007). 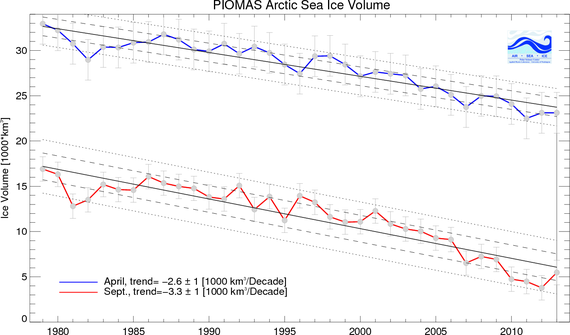 The sea ice volume trend is also downward, but last fall it showed an uptick.