In the interest of General Motors, you are going to have to stop treating me as a problem and accept me as

--A large stockholder
--An active board member
--An experienced businessman

The author of that 1985 letter, Ross Perot, would soon lose two of those qualifications and add some more experience to the third as he would be forced out by management in what the New York Times called "the business world equivalent of a pit-bull match." In that same letter, Perot told General Motors Chairman/CEO Roger Smith that he appeared bored in a meeting, did not let other people talk, and that he had an intimidating style that "stifles candid, upward communication."

This letter is reprinted in full in Jeff Gramm's illuminating and often wildly entertaining new book, Dear Chairman: Boardroom Battles and the Rise of Shareholder Activism. Gramm, who runs a value-oriented hedge fund and teaches at Columbia Business School, includes his own modest efforts at pushing for change in a portfolio company, along with case studies that range from an investor who tried (unsuccessfully) to get the Wrigley Company to install lights so the Cubs could play night games to one of Carl Icahn's early battles, with Phillips Petroleum. One of the most fascinating is the fight between Karla Scherer and the company founded by her father and run by her soon to be ex-husband.

The essential challenge at the heart of capitalism is making sure executives focus on creating sustainable value for the people who provide the capital even though it's other people's money. When shareholders believe that is not happening, they may decide to sell. Or, they may write a letter, addressed to the company's chairman but directed to other investors and the public as well.

In an interview, Gramm spoke how the opportunities and challenges faced by both activists and executives are changing.

I don't think people perceive hedge funds as "scavengers" outside of distressed investing funds (which everyone used to call "vulture funds"). "White blood cells" isn't a good metaphor either because complacent corporate oversight is really the norm, not a passing infection. I can't think of the perfect metaphor. Maybe activists are like picky, outspoken restaurant diners? The fact that they exist keeps the restaurant staff on their toes and probably improves service for all of us. But sometimes the product is tailored to their tastes rather than ours. And every so often the chef gets mad and spits in the food.

What is the difference between the way an activist evaluates a company and the way a securities analyst does? 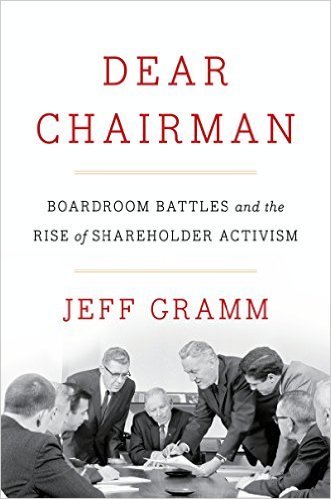 I think a good activist needs to buy a cheap enough stock with enough margin of safety that the situation won't kill them if their activism fails. So ultimately, they should look at things exactly as a good security analyst does. If they don't, watch out.

How has the rise of institutional investors affected the ability of activists to be effective? Do passive money managers have the resources to evaluate activist claims?

This is a great question, and we're at an interesting juncture right now. As I argue in my book, and as you've written about in several of yours, Ross Perot's buyout at GM, as well as years of accumulated maltreatment, sparked a revolution among institutional public company shareholders. The subsequent boom in shareholder activism came out of this, because the big institutions have been very supportive of hedge funds behind the scenes. Entities like Blackrock and CalPERS have become the arbiters of activist disputes. But now, it seems like many of them have decided they want a greater, more public role in improving corporate governance. The FT reported that Jamie Dimon convened a secret meeting with bigwigs like Warren Buffett to discuss governance. Larry Fink publicly released a letter he sent to S&P 500 CEOs. The big Canadian plans introduced a "long-term value" S&P stock index to try to influence governance. So there's a sea change happening and it's going to be interesting to see how it plays out.

To your second question, passive money managers certainly have the resources at their disposal to evaluate activists. . . the question is whether they'll use them to make it happen. They need to!

Do you agree with critics who claim activists benefit themselves (and their investors/clients) to the detriment of other shareholders in the companies they target?

This certainly can happen - it's how capitalism works sometimes, right? And, of course, besides self-interest reigning supreme, an activist investor has a fiduciary duty to put their clients first. If they are an ERISA investor or a registered investment advisor, the penalties can be severe for violating that duty. So they need to do their best job to make money for their own investors. The system works best when the activist is aligned with other shareholders and everyone wins if they have success. But there can certainly be situations where activist profits hurt other shareholders. Greenmail was of course the best example of that. Fortunately, it's getting harder and harder to benefit your own fund at the expense of other shareholders. Because these big pension funds are the arbiters of these activist interventions, reputations matter.

Is activism a market failure or a market correction?

What led you to decide to focus on the letters written by activists to the companies they target? What were some of the challenges you encountered in tracking them down?

I really started the book project as just a collection of letters. I had always collected angry, hedge fund 13D letters for fun. And I had this idea I should broaden my collection to other correspondences between shareholders and public companies. When Warren Buffett sent me his 1964 letter to American Express, that kicked everything into overdrive. Many of the letters were quite hard to get. The Benjamin Graham letter was a real challenge - I ultimately found it in the Rockefeller Archives. Carl Icahn's letter was really hard to find, and then I had to get his permission to republish it. Amazingly, lots of the SEC stuff is hard to get to if it was filed before 1994. There is no longer a public SEC reading room like there used to be.

What happens when activists target other activists? Or when they're on opposite sides, as in Herbalife?

There are several ways activists can collide. When you have two competing activists side-by-side who own the same stock, they sometimes have competing visions for the target company and the intervention. This can be expensive for everyone involved, but ultimately I think it's a healthy thing. When passive investors have a choice, it forces them to really evaluate the activists' ideas. When you have activist shorts versus activist longs, as we've seen in Herbalife, I think it also raises the level of discourse about the state of the company. I think activist short-sellers generally help the system. I respect them for the risks they take -- the market (and the public) can brutally punish them when they are wrong.