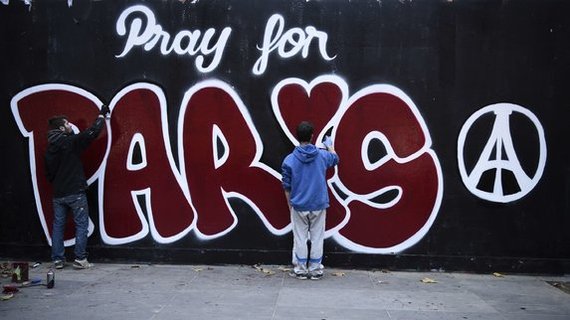 On Friday morning, reports began to break out that an American airstrike had managed to kill Mohammed Emwazi, known, though he shouldn't be, as Jihadi John.

Such flippancy is at best reserved for a pantomime villain at a university play, not a cold-blooded killer who sawed off aid workers' throats as the camera rolled. Can you imagine the mainstream media referring to Osama bin Laden as Loony Laden, as if he was a goofy yet harmlessly lovable buffoon?

These contemptible reductions of world events to superficial buzzwords come at a cost of declining journalistic standards. It is far too high a price to pay, even before one considers the anguish such disrespectful trivialization causes to the victims' families, for whom Emwazi was more than just a Beatle gone rogue.

On Friday evening, Parisians looking forward to a good weekend, in bars, restaurants, cafes, concert halls, and football stadiums, paid a fearful price for Islamic State's rage. It is, of course, impossible that the carnage which unfolded was a direct response to Emwazi's death -- such a coordinated attack takes weeks, maybe months to plan and execute -- but it was part of the ebbs and flows of a war in which France suddenly finds itself at the Western forefront of.

The fight against IS is a global battle, as we keep being told by the media, political analysts, and world leaders. The Muslim world, witness and sufferer to the vast majority of the group's savagery, is repeatedly urged to unequivocally get behind the fight against it. Most of them are. They hate IS, thousands have lost family members at their hands, some in ways too gruesome to describe, even in a macabre piece like this one. To that end, if there is one thing the world can achieve relative unanimity in, it is its collective abhorrence of Islamic State and its desire for the group to be dismantled and decimated.

Why, then, just by watching any social and mainstream media outlets, is it so trivially easy to guess, if you weren't told the location of a terrorist attack, which ones took place in what is known as the Western world?

If world leaders are going to convince people, most of whom, of course, don't live in the West, that we're all in this together, then the media exposure of, and sympathy towards, terrorism that unfolds in Beirut should be the same as that in Boston, Paris similar to Peshawar. The Garissa University attack in Kenya that claimed 147 lives this April barely made headline news in newspapers for a day, and round-the-clock media coverage was out of the question.

Google's global homepage didn't show solidarity with the victims of Beirut's suicide attack on Thursday, and Facebook certainly wasn't offering temporary profile pictures to a green and white background in the motif of Pakistan's flag after militants killed over 150 schoolchildren in Peshawar last December.

But it isn't even fair to blame the media alone. Ask yourself this, in the spirit of honest introspection. If one mainstream media outlet ran rolling news coverage of a terror attack in Lebanon, Kenya, Pakistan, or even Iraq or Syria, would its television ratings be as high as BBC, CNN, and countless others experienced after Friday night in Paris? Do we, in society, Western and the rest, also wedge a gap we need to bridge?

We, as humans, are incapable of summoning up the emotional stamina to feel for every single tragedy that unfurls on the planet; there is simply too much suffering in this world. That is not our fault, it is our DNA. But what we do end up paying attention to betrays a thought process that doesn't spell much by way of worldwide solidarity. Tribalism in humans, and other animals, stems from our evolutionary history.

It is not that terrorism is a way of life in Kenya any more than it is in France.

Right now, Paris is in mourning, rightfully united in its grief with the rest of the world. Beirut is in mourning too, not quite blessed with the same solidarity as its sorrowful European cousin.

Ask your Lebanese, Kenyan, Pakistani, Iraqi, and Syrian friends. Are their massacres treated with importance?

A voice in my head says 'yes', but it sounds terribly hollow and unconvincing at the moment.

Journalist Danyal Rasool significantly contributed to the research, writing, editing, and publishing of this work.

What are your personal thoughts? Contact the author below.

Views of Andrew Royce Bauer are personal and do not necessarily reflect the positions of his company ROYCE at www.royceleathergifts.com.