Can apps be a new way to cure mental disorders?

Not yet, according to psychiatrists who spoke at the annual American Psychiatric Association convention on Monday, May 16, in Atlanta, Georgia.

Of approximately 40,000 smartphone health apps available, about 800 are devoted to mental health, according to Robert Kennedy, MD, Executive Director of the American Association for Technology in Psychiatry. However, few of these apps are developed by clinicians, and there is little science to the vast majority of them, said Seth Powsner, MD, President of the AATP, and Professor of Psychiatry at Yale. Clinicians need to be at the forefront of app development, said John Luo, MD, Chief Informatics Officer at the University of California, Riverside School of Medicine.

Toward this goal, a Collaboratory for Psychiatric App Development has been formed by Kennedy, Powsner, Luo, Victor Buwalda, MD, PhD, from the Netherlands, and Harvard Psychiatry Resident John Torous, MD. The Collaboratory's goal is to generate interest among clinicians to "improve delivery of care and education through app development," said Kennedy.

Apps may provide solutions, the speakers agreed. Half of counties in the United States have no mental health professionals at all, according to the National Institute of Mental Health. However, the Affordable Care Act and mental health parity laws mandate that mental health services are more accessible to all Americans.

At the current time, however, minimal regulation exists for the efficacy or safety of health" apps. Indeed, many studies have disproved the effectiveness of apps for mental health. "If the key to effective therapy, as most professionals argue, is human interaction, can apps provide any benefit at all?" asked Powsner.

Nevertheless, health apps are being developed at a rapid pace. Torous has made analogies between today's mental health apps, and the false promises of cures made by snake oil salesmen a century ago.

Buwalda is developing an app to allow patients to input their own symptoms, in order to monitor the outcomes of treatments.

The Food and Drug Administration, which regulates medications and medical devices, currently has no role in assuring the safety or effectiveness of health apps. However, the Federal Trade Commission has recently issued guidelines for health app development, as well as an online Mobile Health App Interactive Tool to aid health app developers in assuring that their products comply with the laws of HIPAA privacy, the Food, Drug and Cosmetic Act, the Federal Trade Commission Act, and the FTC's Health Breach Notification Rule.

The Collaboratory encouraged clinicians to contact them with ideas for apps, and for help in developing the apps.

This year, the American Psychiatric Association formed a committee to evaluate the effectiveness of apps. 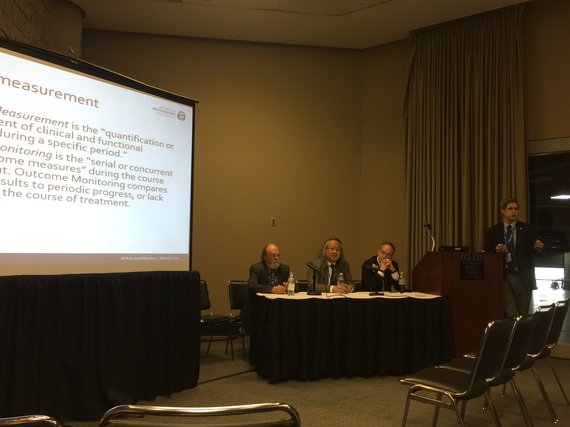