Back when I first moved to New York City in 2005, art toys were blowing up. KidRobot was making art toys accessible to the trendiest hipsters with their playful vinyl toys and coordinating fashion. Anyone remember the neon hoodies?

But now, nine years later, where has this industry gone? Can you still pick up an art toy for your favorite hipster and know that they'll be bragging about it after? Are artist still able to break into the scene, or are the bigger, first wave brands taking over the majority of the economy? I spoke to people from both ends of the spectrum to find out.

First of all, why are art toys so appealing when you could just go to Target and pick up an action figure for, like, $5? Galen McKamy, Creative Director at designer toy emporium KidRobot since 2002, says that, "the quality, design, and exclusivity...creates the draw to designer toys."

So, much like the traditional art world, there are old masters, current stars and those who are just starting out. How does a small fish feel about jumping into a pond with so many bigger fish? I spoke with Aaron Childs, owner and creator of Overlords of the Desert, who recently began officially making free, printable art toys and other purchasable creations out of cardboard, by hand. Aaron said that, "the art titans make it all possible, but collectors are always excited about finding something new."

Galen agreed with Aaron by saying that the art toy market is growing and changing because, "collectors who have 10+ years history in collecting are looking for new ways to collect art; while an influx of new collectors are discovering the appeal of the (mass marketed) art vinyl."

So, I guess that just because I spaced out doesn't mean that art toys are over. But, I wouldn't go stocking up on them for your gift closet. Both of my interviewees said that art toys are extremely personal purchases that should be left to the collector to collect.

But, I say that you can always start someone's collection if you think they'll be into it. Why not?

Do you have an opinion on art toys? Tell me what you love or hate by commenting below. 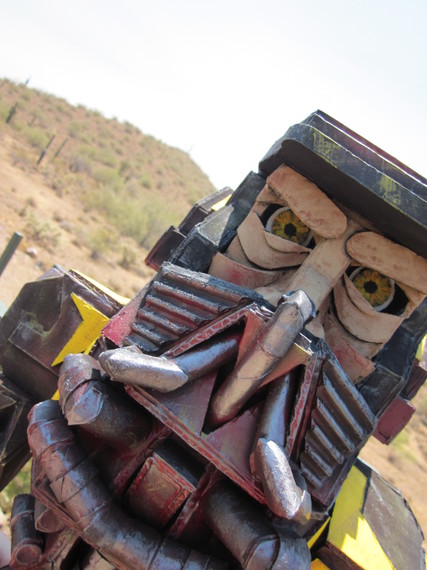 Dredge, a one-of-a-kind hand made and hand painted cardboard robot from Overlords of the Desert.