I have been writing about looking slowly, taking time to let the visual world seep into your thoughts. It took me three years, on and off, to learn to see a certain painting by Mondrian. In my last column, the subject was a beautiful painting in the Art Institute in Chicago that asks, I think, for nothing less than a lifetime of viewing.

After those columns appeared, the philosopher Arthur Danto asked that I not fetishize slow looking. He pointed out that some works of modern art, like Duchamp's urinal or Warhol's Brillo Boxes, do not ask to be looked at for hours and hours. A quick look, or even a glance, is right and appropriate.

But I'd like to pursue slow looking, and think about it as carefully as I think it deserves. One way to pursue this subject is to ask how long it took the artist to make the work in the first place.

If Rembrandt took a year to make a painting, then it might make sense to take a year to look at it. There is a story about Titian, that he kept his unfinished paintings all over his house, turned toward the walls so he couldn't see them. A friend of his watched him walk from room to room, turning each painting around, painting a few brushstrokes, and turning it back to the wall. If that story is true, it means his paintings were sometimes the products of very brief glances, but repeated over very long periods of time. We could then look at them the same way: perhaps briefly, but repeatedly, over many years, getting a new "first impression" every time. It's true that modern art seems very different.

It is interesting to be writing about slow looking and slow thinking in a setting like the Huffington Post, where news moves at such a breakneck pace, where you can jump from one post to another as quickly as a click of the mouse. We are all afflicted with a mild attention deficit disorder, and when comes to images, our flightiness is especially intense. We consume more images per lifetime, per day, and even per minute than any culture before us. Modern paintings often seem to have been made quickly, by comparison with the paintings of earlier centuries, and that seems to give us the license to look at them quickly--to consume them and move on. 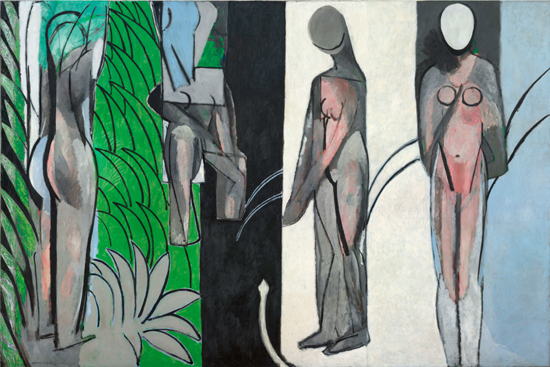 Matisse, Bathers by a River

It seems that if we're talking about how long painters take to make paintings, we should begin by admitting a general truth: modern and contemporary paintings took less time to make, on average, than medieval, Renaissance, or Baroque paintings.

There are modern and contemporary artworks that required long periods of labor, but they are the exceptions that prove the rule. Matisse worked on Bathers by a River in 1909-10, 1913, and 1916-17, as the recent exhibitions in Chicago and New York have demonstrated. Compare that to the work that went into Titian's Bacchus and Ariadne, which is more or less average for Titian in terms of the labor it would have required. 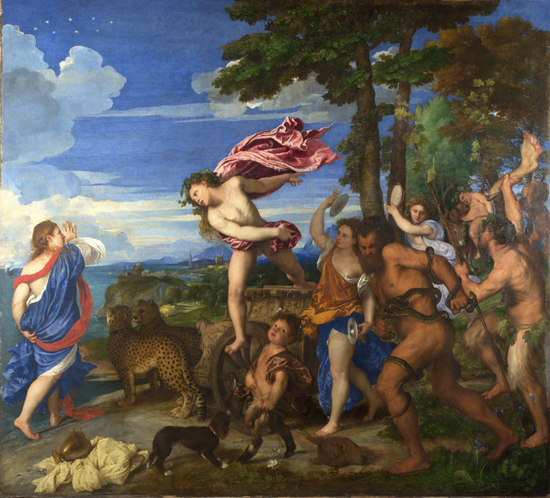 There are few works in Matisse's career that took as long as Bathers by a River, and during those same years Matisse produced hundreds of other works. It is possible to make a list of modernist works that would have required long working hours, such as Matisse's Serf (which took three years to finish), Seurat's Grande jatte (which took two years), and Picasso's Portrait of Gertrude Stein (which requried ninety sittings). But those few examples are more than balanced by the hundreds of documented commissions in the Renaissance.

Some of the most labor intensive contemporary works are multiples or ongoing projects, for example the Boyle family's exhaustive copies of random parts of the earth's surface (they cast portions of the Earth's surface and meticulously paint them), or the counting projects launched by Jonathan Borofsky and Roman Opalka. (Borofsky's pile of papers has nothing but numbers on it: he is counting to infinity. Opalka has been painting numbers, one to infinity, since 1965.)

All these exceptions, I think, prove the rule. 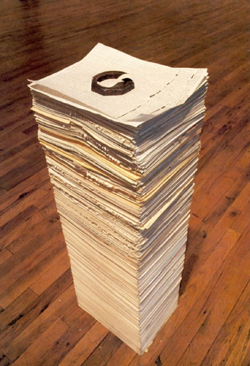 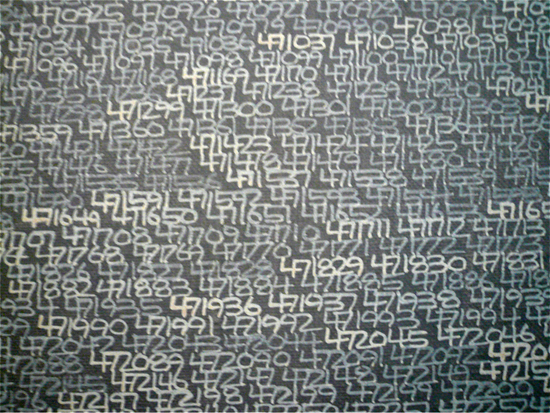 Why do modern artworks take less time to make, on average, than their Renaissance counterparts? It has been argued that modern paintings are like icebergs: what we see in a Picasso portrait is only the one-tenth that remains after the nine-tenths have been hidden. In the film The Mystery of Picasso, the artist seems to insist on that explanation by creating nearly complete paintings and then scrubbing them out and starting again from scratch. (I don't doubt that he worked hard, but I do wonder how much he was playing to the cameras.)

James Abbott McNiell Whistler said that he didn't charge for the two days it took to make one of his paintings, but for "the knowledge I have gained in the work of a lifetime." But that doesn't help solve this problem because we cannot know how much preparation went into Renaissance works. Piero della Francesca, for example, wrote three full and complicated books, more words than all major modern artists except Kandinsky, and Piero's books have more illustrations than any modern artist's books. The detail, complexity, and compositional finesse of Piero's paintings argue that he put time into perspectival studies, composition sketches, and full-size preparatory drawings. The fact that Matisse labored two years attempting to balance realism and abstraction in The Serf does not support the counterclaim that Titian must have spent less time on the eight figures in his Bacchus and Ariadne. 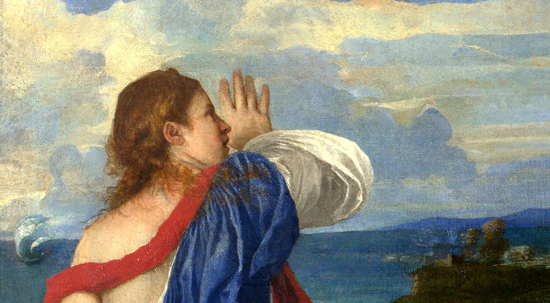 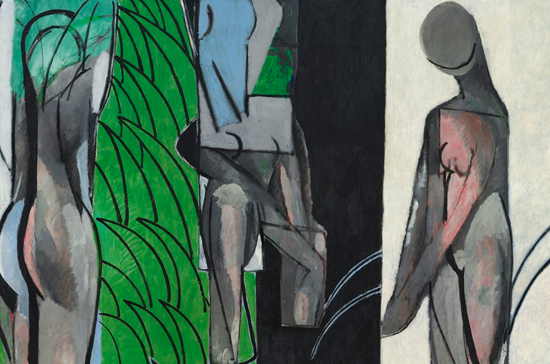 Maybe Renaissance paintings took more time because back then artists were still trying to represent the real world. They lived in a highly ornamented world, and they were interested in trying to depict things like Corinthian capitals, silver goblets, pictured tiles, and brocaded saints' robes. Surely it takes more time to draw an Ionic volute in a Greek-style temple than to sketch one of Frank Gehry's a postmodern punched-out windows. 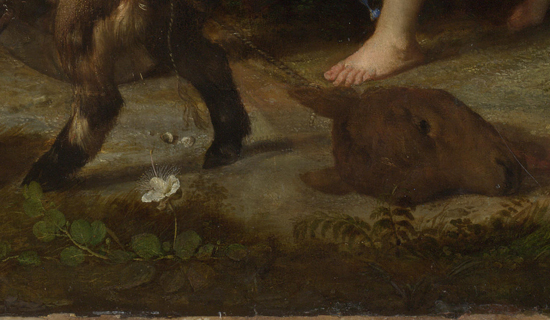 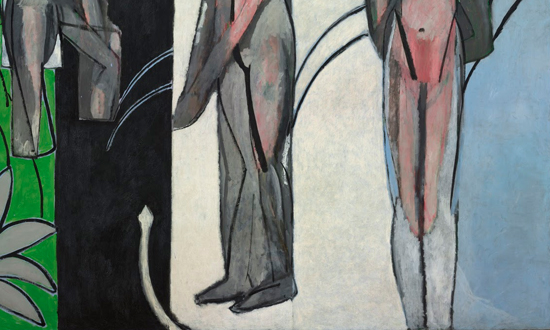 Realistic paintings do take more time, but I don't think we can explain the contrast I have in mind by appealing to the labor involved in naturalistic painting. The complications of realism seldom account for the majority of any given painting. Only a small percentage of the Bacchus and Ariadne is taken up with jaguars, tambourines, and chariots. The relatively short amount of time modern and contemporary artists spend on individual artworks cannot be explained by the fact that we're no longer interested in realistic depictions, and it can't be explained away by saying artists might spend a long time pondering before they paint.

This is where we get to what's strange about this subject. Art historians have observed that Renaissance artists sometimes painted the heads and hands of their figures, and gave all the rest of the painting to their apprentices. That implies that the naturalistic passages were somehow boring. Before modernism, most of the surface of any given painting was fairly uninteresting stuff: the idea of the painting might have been interesting, and maybe the main figure's face. But the majority of the painting was probably tedious to make. How interested could Titian have been in all those trees?

Holbein's Allegory of Sight is about as full of stuff as a painting can be, and it's interesting and impressive, to a point. But surely--so the art historical account goes--a lot of that painting must have been just work, the kind of thing Holbein could have done while he was listening to music, or chatting to his friends. All that stuff might have been diverting, but it must also have been largely tedious or boring. 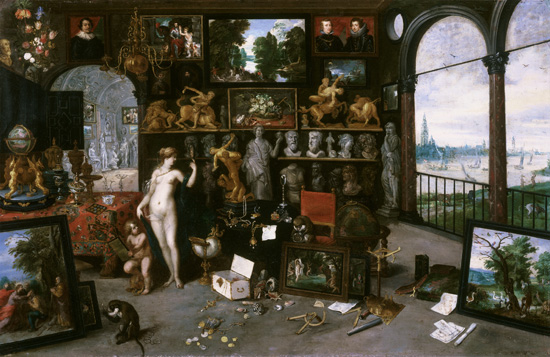 Modern painting, on the other hand, is said to be potentially interesting throughout, in every mark, at every inch. Frank Auerbach could not possibly have been bored when each brushstroke mattered so much. His best work is exemplary because he risked everything at every moment. Not a single mark is rote, habitual, or routine. Everything is contingent, as the art historian T. J. Clark says, and nothing is settled. Boredom is out of the question. A good work could not possibly be made by a bored artist.

In this way the usual account of the history of Western painting entails the idea that before modernism, painting was sometimes a fairly boring affair.

But this problem is not so easily solved.

Here is something wonderful to ponder about boredom. It may seem that boredom is a natural human trait, something that's been around as long as people have. But it turns out that is not true: as a theme in literature, boredom is an invention of the nineteenth century. The historian Walter Benjamin thought boredom was invented by the middle classes around 1840, and whether or not that's exactly right, no one made boredom into a theme -- no one complained about it, novelists didn't write about it, diarists didn't dwell on it -- before the nineteenth century. The French word "ennui" came into common use at about the same time, and so did the Italian word "noia." I don't doubt that in the Renaissance people often found themselves at a loss about how to spend an afternoon, but no one was vexed by boredom, or in need of continuous distractions. Not a single Renaissance artist left a diary, or a letter, describing the appalling boredom of the long hours spent in the studio.

Boredom is about two hundred years old, young by historical standards. It's younger than Titian or Rembrandt. Boredom, Benjamin says, is part of our modern middle class malaise, a sign of our anxiety, of the fragmentation of our lives, of our compulsive need for continuous, intensive distractions. Modern and contemporary artworks take less time to make, on average, than older artworks, partly because we have become skittish. We're impatient. We're easily bored. Many of our artists can't work too long on anything, even if they wanted to. And so, as Arthur Danto says, it would not be right to fetishize slow and careful looking. But that is exactly what I intend to do in this column.

Art critic and historian, School of the Art Institute of Chicago