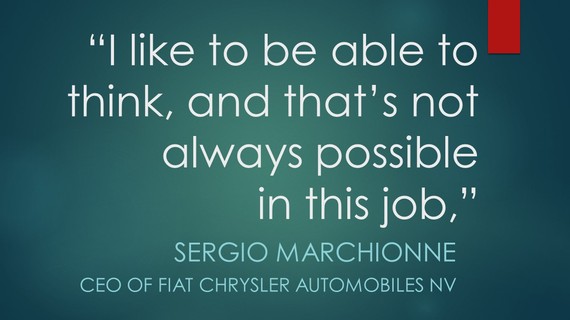 Well, now that's a scary thought coming from the CEO of an immense global organization, especially one that manufactures products in which safety is paramount.

A bit of context: this quote comes from a Bloomberg article that describes the hyper-scheduled lives of today's global CEO's. The piece describes fatigued executives, traveling as many as 20 days a month, crisscrossing the globe to woo investors, cheer on employees and hobnob with clients. Some opt out due to illness, others just say "enough" and move on. In the quote above, Marchionne, who was a philosophy major as a student, bemoans the lack of time for true reflection and stillness in a CEO's hectic life.

Still others thrive on the pace and have successfully developed coping mechanisms to stave off illness and burnout. They say that's the life of a CEO who runs a global operation, take it or leave it. But their numbers pale in comparison to the many who struggle to maintain the pace.

What's most troubling to me about this article is the pervasive sentiment that "this is the way it has to be." Michael Useem, director of the Center for Leadership and Change Management at the University of Pennsylvania's Wharton School, is quoted in the piece, saying, "The best way any CEO can explain his or her company's strategy, values and the jobs people need to perform is to be in the room, in front of a lot of employees or other constituents. Nothing works as well as that personal presence, despite the personal toll that can take."

I'm not convinced by this argument. Is "in person" highly desirable? Yes. Is it imperative for every single meeting? No. Many of these CEO's came of age in a day when hopping on a plane was simply what was done - there was no way to get a "visual" read on the audience, so a business trip was essential. In their estimation, the best way to get the job done was to hop on a plane and meet eyeball-to-eyeball.

Or is it? There are technologies available that can put key leaders into situations that create connections, without physically being in the room. Even if CEO's dialed back by 20 percent on their in-person meeting attendance, that would keep them at their home base an extra 4 days a months. That's nearly an extra work week. I know of several executives who lead global teams and make regular use of webcams and other forms of technology to keep them connected to their teams. Do these modern-ay leaders still get on a plane and interact with their colleagues face-to-face? Of course, but they see in-person meetings as one tool in a larger toolbox for communicating with key constituents.

Look, I get it: CEO's of large companies are compensated handsomely and most of them travel in style. We "regular folks" probably aren't going to be too sympathetic to their plight. Most likely, people would say the exorbitant salaries many CEO's command compensates for the grueling pace. But if I worked for a company where I thought my CEO didn't even have "time to think," I'd be pretty nervous about the direction of the enterprise. It might not hurt to rethink the whole, "Our CEO needs to be everywhere to do the deal" mentality. Do you really want a burned out executive running your company?

What's your take on this? Do CEO's have an outdated mindset on corporate travel? Or is this the "new normal"?