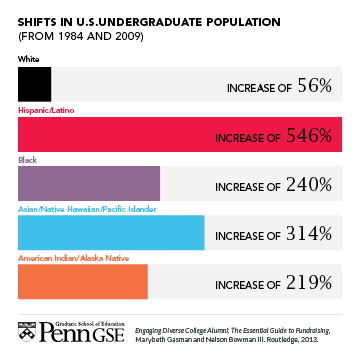 By 2050, there will be more people of color (54.8 percent) than Whites (45.2 percent) in the United States. Based on the nation's shifting demographics, we are already seeing major changes on college campuses in terms of students and alumni. Between 1984 and 2009, these changes have been somewhat astounding. For example, the Latino student population has increased by 546 percent, the Black student population by 240 percent, and the Asian American and Pacific Islander student population by 314 percent. Even Native American students, who make up very small numbers on college campuses, have increased by 219 percent.

With all this change, why are so few colleges and universities prepared or preparing to engage their very diverse alumni? We think one of the reasons is that engaging diverse college alumni takes some retooling, some rethinking of standard practices, and some challenging of common assumptions about racial and ethnic minorities. For example, in our research, we noticed that many college and university fundraisers see people of color as recipients of philanthropy rather than givers.

Most colleges and universities don't collect information on philanthropic giving and other forms of engagement among alumni of color. However, to maintain their current funding levels, colleges and universities must start to learn about the giving habits and traditions of their alumni of color. Not only is this the right thing to do, but it is going to be a matter of the bottom line when the country's demographics begin to change more rapidly.

We suggest five concrete ways that colleges and universities can engage their diverse college alumni:

First, it is important to create spaces to discuss issues of race and culture. Many alumni of color don't give or aren't engaged because they have lost or never established trust in their alma mater. These trust issues can be alleviated through face-to-face, open communication as well as respect for diverse cultural traditions.

Second, fundraisers need to understand what motivates alumni of color to give. For example, our research suggests that African American alumni are more likely to respond to fundraising appeals tied to the notion of racial uplift. We also learned that Asian Americans often give gifts in memory of lost loved ones. And, Latinos regularly support programs that address barriers to Latino educational opportunities. With regard to Native Americans, they tend to view giving as an extension of honor and are interested in preserving future generations of Native people.

Third, it is essential to understand why alumni have not given in the past. When we talked to alumni of color, some told us that they are often not asked in a manner that is respectful of their cultural background. Others mentioned having had negative experiences on campus that have remained unaddressed. Still others told us that fundraisers aren't transparent about where philanthropic contributions are going.

Fourth, college and university fundraisers need to ASK alumni of color to give! All too often, diverse college alumni are not valued or seen as valuable and therefore overlooked during prospect identification. However, our research indicates that minority groups give a larger percentage of their discretionary income to charity than do Whites. We suggest providing concrete giving opportunities, such as scholarships, diversity initiatives, cultural centers, and faculty diversity efforts.

Fifth, most diverse college alumni value community over the individual and are interested in an institution's efforts to uplift the next generation. They want to know HOW their alma mater is making college a worthwhile and beneficial experience for students of color. 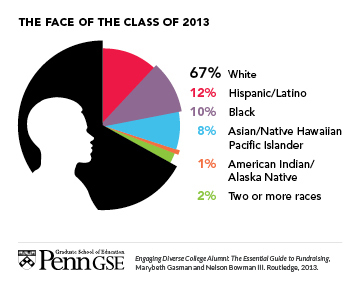 Despite all of the evidence and ample discussion of the nation's growing diversity, most colleges and universities are practicing business as usual when it comes to fundraising. It's as if they doubt that the changes in demographics across the nation are going to result in changes on their specific campuses. If there is any doubt, consider this: the graduating class of 2013 was 33% students of color and as these students crossed that stage in their caps and gowns they became alumni. Question: Should your institution engage them? Do they know how?