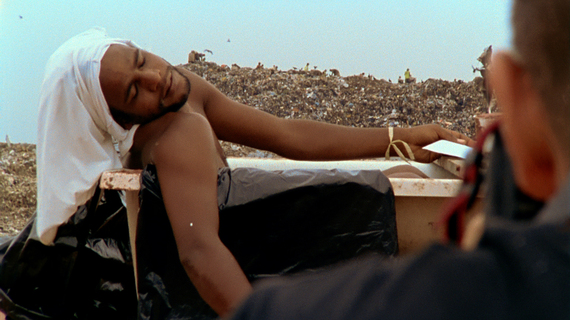 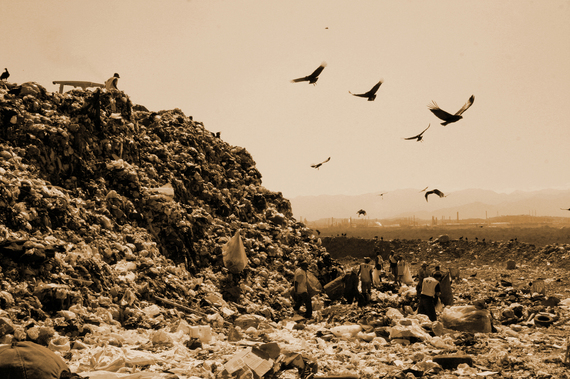 When I think about what might be mine, I keep coming back to the Oscar-nominated Waste Land (2010). Hopefully you've seen it, as it's now been a few years since it was released. It chronicles the Brazilian artist Vik Muniz's collaboration with a group of catadores (Portuguese for picker), who pick out recyclable materials from Jardim Gramacho, Rio's largest landfill. Well-known for re-making iconic images with non-traditional materials, Muniz photographs the workers--often in the poses of famous artworks. He then recreates the photographs as large floor sculptures using the garbage they work with every day. Muniz then photographs the sculptures and sells them as prints to benefit the catadores. One work fetches $64,000 at a London auction (at Phillips de Pury). Having also grown up poor in Brazil, Muniz's success as an artist motivated him to collaborate with and give back to the catadores. 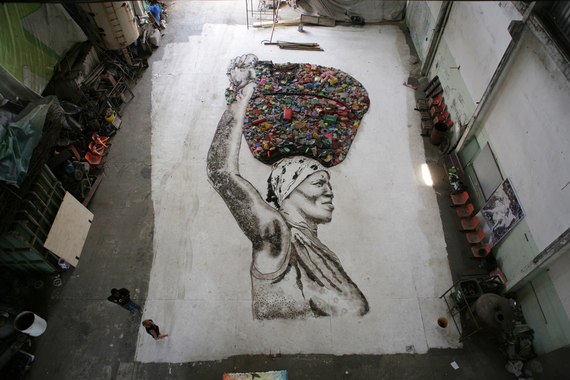 I had always liked Muniz's work, but Waste Land significantly increased my appreciation of it. Having written a book about political art, I feel I have a sense of the difficulty of creating multidimensional political work. Muniz's images are political but have conceptual layers and are formally complex. They bear witness to an ignored population and to a major environmental issue while also engaging with iconic artworks and achieving ambitious compositional goals. It's also hard to navigate a collaboration between a successful international artist and marginalized populations without the artist being perceived as manipulative. Yet Muniz manages to deal with the catadores sensitively and be frank about the unfortunate realities of the collaboration. For example, the film shows debates between Muniz, his wife and his assistants concerning the effect of their work on the catadores. In particular, they debate whether bringing one of the catadores to the Phillips auction will be too much for him to handle. 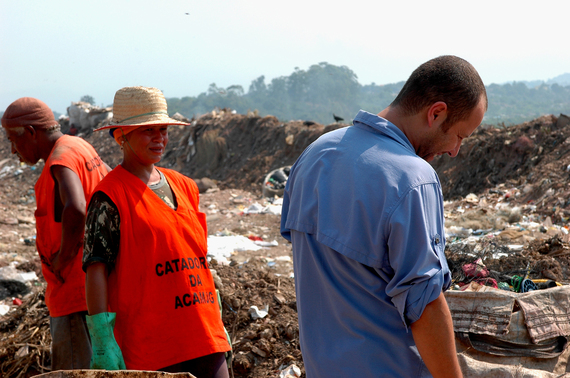 Waste Land also doesn't over-dramatize or oversimplify the poverty of the catadores, but shows the diversity of their experiences. For example, the film begins by focusing on Valter, an older man who is proud to be a picker and thinks he is doing something helpful for the environment. The following subject is Isis, a young woman who has been at the landfill for six years and hates it. Then there is Suelem. She has worked at the landfill since she was seven and has kids but can only visit them occasionally.

Additionally, Waste Land is the only artist documentary that has ever made me cry. So much of the film presents the various stories of individual catadores. Watching them create work with Muniz and then seeing them view these works at an exhibition at the end of the film is amazing. It brings them (and viewers) tears of joy. It's incredible to witness what their work with Muniz has enabled them to experience. It's also allowed many of them the time and space to change their lives.

Muniz's interest in helping the poor in Brazil did not end or begin with the completion of Waste Land. It was just announced that next month, in collaboration with MIT, Muniz plans to open an art and technology school for children 5-8 years old in Vidigal, one of the Rio favelas. And in 2006 Muniz created Centro Espacial Vik Muniz, an arts education center, also in Rio.

Stepping back from Waste Land, what is the role of artist documentaries like it now and in the future?

Increasingly, films about artists have become more prevalent in the art world. They span from more formal documentaries to mini-films produced by galleries that offer previews of artist exhibitions. The possible financial rewards to be made from selling contemporary art and the current ease of making films are primary motivations.

There are a lot of positive things about the increased presence of such films. They are great devices for making art more accessible. They give a wonderful window into an artist's process. They often show more concretely than other media what an artistic career entails as well as enable a view of the structures and institutions of the art world. They also give more of a voice to artists and take the time to synthesize commentary about the work.

Yet as these films increase in number, what are the risks? Do these highly-engaging documentaries become more important than an artist's work? For example, in the case of Muniz, will Waste Land (and the series of works created out of it) be what people remember about him rather than his other work?

Also, do these movies simplify the process of art-making? Does art too often serve as an illustration for films? Does the fast speed of films offer the necessary space and time to sufficiently contemplate and consider a work of art? Do films promote the personality and story of the artist above the artwork?

As always, please feel free to send me your feedback, either here or on Twitter. This is the sixth in a series of posts on individual artworks. Previous posts have concerned one of Cindy Sherman's Untitled Film Stills, Jean-Michel Basquiat's Pegasus, 1987, Keith Haring's "Crack is Wack" mural, Banksy and Damien Hirst's The Physical Impossibility of Death in the Mind of Someone Living.