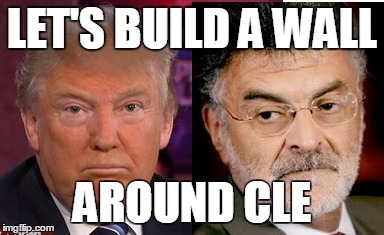 Fusion TV, owned by Univision, was in Cleveland recently, investigating a storyline that the city, playing host to the upcoming Republican National Convention, was seeking to attract thousands of immigrants to help reverse depopulation, revive struggling neighborhoods, and boost entrepreneurship.

The TV producer heard about the Cleveland Mayor's "Dream Neighborhood" program to rehab or build homes for new refugees. She thought that this was a nice angle to juxtapose against the flaming nativist rhetoric and xenophobia of the GOP's presumptive presidential nominee, Donald Trump.

The only problem with this narrative about Cleveland really embracing immigrants, all immigrants (not just refugees), and joining the immigrant-friendly city movement found in nearby rust belt cities, is that it's false.

Yes, Cleveland is one of the poorest big cities in the county, and it is one of the fastest depopulating cities, in dire need of new blood, new energy, and an army of entrepreneurs, homeowners and consumers. With only 4 percent foreign-born, less than a third of the national average, and a mere fraction of the most dynamic cities in North America, Cleveland is no longer plugged into the immigrant pipeline that drove its growth in the early 20th century. It sorely needs to get back into the game as an immigrant-friendly destination for those seeking to launch their American Dream.

But the city leaders are surely not looking now to immigrants as a key part of its renaissance, despite the fact that immigrants are twice as likely to start a business and file a patent, compared to American-born folks like me, and inject a vibrant cultural diversity, consumerism, and economic bridge to markets abroad.

Yes, Cleveland Mayor Frank Jackson, a Democrat, has been talking a bit about immigrants lately. Well, really only refugees. Curiously, he and his political allies do not talk about the majority of other immigrants and their needs in the City of Cleveland. We don't hear him talk about the THOUSANDS of undocumented immigrants that live in Cleveland (many married to U.S. citizens, with U.S. citizen children, owning homes and owning businesses).

The city declined to follow the lead of 70 other cities and counties in filing an amicus brief with the U.S. Supreme Court in support of President Obama's DAPA program (Deferred Action for Parental Accountability, intended to provide temporary relief from deportation to 5 million undocumented folks without criminal records, who have U.S. citizen or Permanent Resident children). Maybe this was because Cleveland leaders are in agreement with Ohio Governor John Kasich, who joined 25 other governors in filing the federal lawsuit against DAPA, saying, "No soup for you!" Curiously, Global Cleveland, a non-profit ostensibly created to drive immigration-based economic development and integration strategies, recently co-hosted a City Club of Cleveland event featuring a speaker who OPPOSES DAPA.

Cleveland can relax, for now. The U.S. Supreme Court, in a tie vote on June 23, 2016, leaves the lower court's order striking down Obama's DAPA program in place.

The issues related to immigration, regardless of whether the federal government deals with it or not, falls to the cities. At least those cities that care enough to try and address them. Immigration is an urban challenge and opportunity.

In the past few weeks, after years of civic dialogue, mayors and city councils in Cincinnati and Detroit passed Municipal ID programs to integrate the undocumented in their community (as well as homeless and other marginalized groups). Jackson and his team remain stone silent.

We don't hear Jackson or his cohorts talk about the importance of immigrant entrepreneurs and investors, how it is so important for city leaders to tear down the barriers at city hall and offices of Cuyahoga County that impede immigrant entrepreneurs, who often face unique challenges related to language and culture.

We don't hear Jackson talk about the talent and capital that international students bring to Cleveland every year, and the tragedy for Cleveland in seeing most of the students leave the United States sometime after graduation due to worker visa shortages. Of course, we never get to hear them discuss creative workarounds for those students to stay in Cleveland and invest their talent and money AND obtain a visa to remain in Cleveland.

We don't hear about the creation of an Office of Immigrant Affairs in City Hall --- which many cities in the rust belt have launched in recent years.

We don't hear about translating city hall website and materials to OPEN up the city hall for all people --- as part of a language equity policy. We don't hear about doing outreach to existing immigrant communities, with law enforcement, libraries, and others, to build community, groom civic leaders, educate on naturalization and visas for victims of crime and human trafficking.

We don't hear Jackson talk about political asylum, and those who find their way to Cleveland as tourists or students, but who cannot return home for fear of persecution based on political opinion, religion, ethnic group, or sexual orientation. 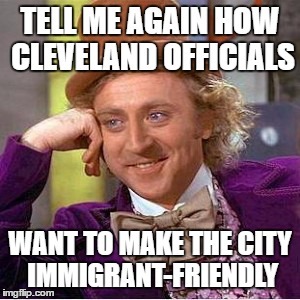 Instead, we hear about some inchoate plans to create an Orwellian "Dream Neighborhood" to segregate new refugees in rehabbed homes The plan appears to be driven by private interests/developers, not city hall. Also, refugee resettlement itself is driven by nonprofit resettlement agencies, like Catholic Charities, not city hall. So, it's not clear why the city is talking like it's THEIR program.

Whatever the program is. It's still not clear, despite being talked about for years.

In any event, in light of Jackson's longstanding rebuff of immigration-based economic development and welcoming strategies, like those embraced in Philly, Pittsburgh, Detroit, Cincinnati, Dayton, St. Louis, Columbus, Buffalo, Toledo, and so many other cities---- with his "Cleveland Takes Care of Its Own" mantra it is hard not to be skeptical of the mayor and his team (which extends to his non-profits) when they talk about welcoming refugees. Those who have dipped into the issue know that Frank does not believe in actively welcoming and attracting immigrants to rebuild the city's population and economy.

Excuse me if I am a bit jaded in thinking that something driven by Albert Ratner, Chairman Emeritus of Forest City Enterprises, Ronn Richard, President of the Cleveland Foundation, and Mayor Frank Jackson, such as Global Cleveland or its new pet project the Dream Neighborhood, might merely be a PR move to distract the public and mask the Mayor's nativism -- making Cleveland APPEAR a bit, well, immigrant-friendly.

Jackson and his team know that refugee flow is dictated by the federal government. A small number of refugees enter the U.S. per year, 65,000 to 85,000. A trickle will make it to Cleveland. Small enough not to change Frank's agenda. Jackson's allies in local politics, business and philanthropy, must know, certainly, that Cleveland is an outlier in the rust belt in the immigration game. They don't want to look too bad, so voila, the Dream Neighborhood.

In any event, refugee resettlement, as important as it is, and the Dream Neighborhood, whatever it is, are not a substitute for a comprehensive immigration integration strategy. Joe Cimperman, the longtime downtown Cleveland City Councilman and new head of Global Cleveland, knows this. During his 18 years on City Council, and despite being a child of an immigrant, Cimperman has largely avoided the plight of immigrants in his city, and ignored the opportunity to revitalize the city by welcoming and integrating a new wave of immigrants. In 2013, Cimperman and his City Council comrades joined Jackson's administration in boycotting Welcoming America, an umbrella organization for nearly 100 communities nationwide, when it came to the city seeking a partnership with the City and Cuyahoga County on crafting local immigrant integration strategies.

Joe Roman, the President of the Greater Cleveland Partnership, the city's chamber of commerce, equally avoids the issue like the plague, not wanting to fall out of Jackson's favor. Roman declined a request to do a Cleveland event around immigration reform a few years ago with the Partnership for a New American Economy (a coalition of CEOs and mayors around the country, convened by Michael Bloomberg and Rupert Murdoch)

Have you ever wondered why there are 40,000 African immigrants in Columbus, and only a handful in Cleveland? The answer: local policy. Clearly, when Mayor Jackson pushed out the Somali and Ethiopian taxi companies and drivers a few years ago, many of them Muslim who were ticketed for praying at Hopkins Airport, harassed, and ultimately denied access to contracts at the airport, the word spread around the country, and around the world, that Cleveland does not welcome immigrants. Due to the harassment and loss of business, many of this new wave of African immigrants left Cleveland for greener pastures in other cities around the country. Ironically, with a political leadership at City Hall driven by African American leadership, immigrants of color do not often feel welcome.

Numerous journalists have told me that Jackson declines media requests to talks about his immigration strategy. There is reason for this. One, he has none. Two, he doesn't want anyone to know he doesn't have one. And three, he doesn't want one -- he believes that immigrants will hurt Cleveland by competing for jobs, changing the race-political game, and changing the definition of diversity from a black/white paradigm.

It is up to citizens to ask Jackson, PUBLICLY, when the cameras are rolling, why he feels this way? While Trump at last speaks his mind on immigration, Jackson stays largely mum. Other than saying that he seeks to "take care of our own," he offers no insight as to "who" are "our own." Does this include the thousands of undocumented immigrants living now in Cleveland? Further, he declines to specifically address why he feels that the economists' research on immigrant contributions is wrong, and why so many other cities in the rust belt are misguided to work hard to integrate and attract immigrants.

When he is asked publicly about immigration, he is almost indecipherable. Here is some of his almost incomprehensible jabberwocky in answering a citizen question on immigration. When asked recently about his immigration programs, he responded:

"Programs is programs...We don't believe in programs...sometimes you are worse off after programs."

Huh? Isn't the "Dream Neighborhood" his program? What about the hundreds of programs currently under his management at city hall?

For a peek at a REAL immigrant integration and attraction strategy, check out Chicago's Plan for New Americans, outlining the mayor's vision of being the most immigrant-friendly city in the world.

For those still hanging on and reading, you may be also be interested in checking out "Cleveland Needs Immigrants: Why and How to Welcome More Foreign Born Residents" which was the original plan for Global Cleveland, until the Cleveland Foundation and the Jewish Federation, in order to appease Jackson, said "no way Jose" and pulled the plug on the immigration strategies. After dumping nearly $5 million and wasting six years, Global Cleveland has accomplished.......

Check out the organization's history and you can fill in the blank.

So, all this begs the questions. Why even launch do-nothing organizations like Global Cleveland, or engage in prolonged civic dialogue about empty projects like the "Dream Neighborhood" or "La Villa Hispana"?

Because it creates the appearance that the necessary and important work of immigrant inclusion is actually being done.

Albert Ratner's parents, immigrant entrepreneurs who came to the U.S. long-ago with nothing and founded Forest City Enterprises, now a multi-billion dollar national real estate development firm, would surely be ashamed of how little their city embraces the immigrant spirit in the 21st century.

On July 18, 2016, Trump will be in Cleveland for the GOP Convention. He will find many friends here who understand that immigration is a wedge issue that can be played for political advantage, much to the detriment of the American people.