Leonardo DiCaprio, Jenny McCarthy, Stephen Dorff, Kevin Connolly, Bruno Mars... the list goes on and on when it comes to celebrities and the new "it" accessory, the e-cig.

A few years ago, before vaping hit the mainstream like it has today, Katherine Heigl made an appearance on the David Letterman Show and started puffing away on her e-cigarette. David Letterman himself even took a few puffs. This might have been the beginning of the e-cig celebrity-ism. 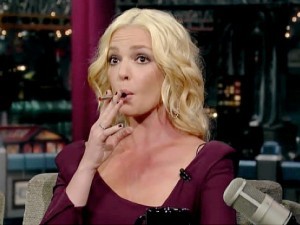 Recently, popular celebrities have been spotted and photographed using e-cigarettes and some have even gone so far as to endorse them. Actress Jenny McCarthy recently joined actor Stephen Dorff endorsing the Blu eCigs brand. Musician Bruno Mars just signed on as an investor in the electronic cigarette company NJOY. E-Lites made a cameo appearance in a music video by one of the UK's biggest stars, Lily Allen. Miley's little brother, Trace Cyrus has been seen toting around his CloudCig. It goes on...and on.

Not everyone is thrilled with the trend as was apparent when a few U.S. Senators raised concerns after the recent Golden Globe Awards. Several stars were seen puffing away on electronic cigarettes during the ceremony, prompting the Senators to claim Hollywood was glamorizing smoking and urged them not to allow e-cigarette use to appear at future shows. But do they have the right?

Introduced to the U.S. market in 2007, the electronic cigarette offers an alternative to smoking tobacco. Though they looks like regular cigarettes, they contain no tobacco and instead have a mechanism that heats up liquid nicotine, which turns into a vapor that smokers inhale and exhale. While it can be said that these e-cigs don't give off second-hand smoke, they still contain nicotine and here is the catch... because they are tobacco-less, tobacco laws don't apply, such as the age required to purchase these items.

While the manufacturers say that their electronic cigarettes offer many advantages over traditional cigarette smoke, the health experts aren't so sure. There haven't been enough tests conducted yet to know what possible side effects inhaling nicotine vapor poses, to both users and to the public. Those calling for tight regulations on e-cigarettes claim that these devices should be deemed illegal until the proper research trials have been conducted to prove that they're safe.

For now it seems to be a house divided with supporters saying that anything that gets people off of regular cigarettes is beneficial to society, while the other half claim that celebrities are 'glorifying' smoking, planting the seed in the younger generation that it is 'cool' to smoke.

Lover of music, travel, and everything art related