Do European lenders want unemployment to keep rising in Greece?

It looks that way. The commitment to economic austerity policies by the "troika" - the European Central Bank, the European Commission, and the International Monetary Fund - hasn't wavered. Meanwhile, the country's unemployment rate has soared to yet another unexpected high. In a population of 9.3 million, 1.3 million are out of work.

Check out the chart below. Employment has collapsed under measures demanded by the trio of lenders, and acquiesced to by three successive Greek governments. The trough is wider and longer than it was during the Great Depression.

And despite the bravos that followed the nation's return to the bond market, the crisis is actually escalating.

Of its many difficulties, unemployment has emerged as the key challenge for Greece. There's a solution that should top the agenda when eurozone talks get going in Paris during September.

The first policy response should be a major, government-backed jobs guarantee program. It's a strategy with a historically strong record. New research-based evidence now unmistakably demonstrates that the benefits would easily outweigh the costs. 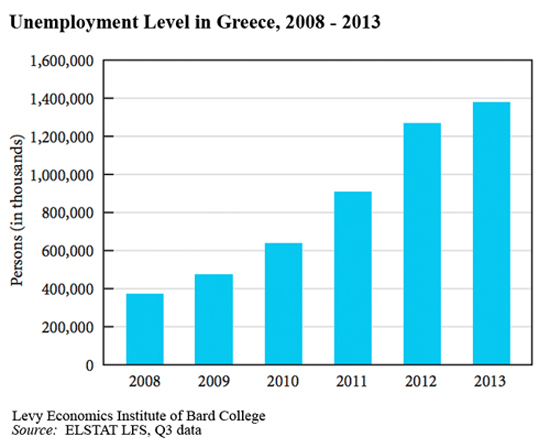 The scale of Greek unemployment is catastrophic, and the issue crosses borders. Greece has become a template for how an austerity regime crushes a workforce. The highest unemployment rate in Europe is the disastrous fallout of the world's most rigorously enforced fiscal tightening policy.

Beneath today's EU policies lies the conviction that as growth increases, businesses will hire enough workers to make the employment issue miraculously disappear. That notion is a fantasy.

Why? The link between a GDP boost and higher employment has been declining for decades. Simple arithmetic and logic also tell us that it would be impossible for private enterprises to fill a hole this deep - we're not talking about an economy that needs a little tweak.

And companies strive to keep their number of employees at a minimum. It's not the business of business to hire as many people that need jobs, or to resolve a national jobs deficit.

Even in a best-case growth scenario - no more belt-tightening, and an economic rebound beyond any realistic expectation - it would be well over a decade before employment returned to pre-crisis levels.

In the face of these conditions, a team spearheaded by Rania Antonopoulos here at the Levy Economics Institute proposed a detailed, public benefit, direct job creation plan. The resulting models are compelling.

The study estimates what the outcomes would have been if Greece had enacted a broad employment program in 2012. Work would be dedicated to areas like physical and information infrastructure, the environment, social services, education, and culture.

At the low-midrange of the scale, Antonopoulos simulated the direct public creation of 300,000 jobs at today's wages. Multiplier effects - indirect results - increased the total gains to almost 400,000 mainly skilled positions. That is, government jobs would fuel the creation of those additional jobs in private industry.

Unemployment was reduced by roughly 30 percent. GDP rose about 4 percent.

The price tag? At that same midpoint, the all-inclusive cost was €4.5B, with around half of it recovered from higher tax revenues.

To run this impressive game-changer, Greece would have to net spend a little over 1 percent of its GDP. That's a relatively modest stimulus. Other nations, when faced with hard times that didn't come close to the distress in Greece today, have launched stimulus programs that were far larger. Germany and Brazil invested 4 percent of GDP, the U.S. 5 percent, and China invested 13 percent of GDP.

The program could feasibly be funded by a dedicated EU employment fund, the issuance of special-purpose tax-backed zero coupon bonds, or a temporary suspension of sovereign debt interest payments. Even if the government borrowed the funds, the debt-to-GDP ratio, the measure of health most important to European leadership and financial markets, would improve.

For Greece, international lenders and their "rescue" packages have proved to be anything but saviors. Instead, their achievement has been to socialize the ownership of the government's debt.

It has been transferred off of the balance sheets of private sector German, French, and U.K. banks, and on to those of Europe's national banks... and ultimately handed to the citizens of Greece.

Jobs-targeted stimulus programs have succeeded worldwide, including in South Korea (in the '90s), China, Indonesia, Chile, South Africa, and, further back in time, the United States. Antonopoulos and her team have proved that in Greece, a similar plan would work.

A sweeping national jobs guarantee program wouldn't, of course, revive Greece's overall economy on its own. But it would lay a foundation. It's a proven, cost-effective way to address the multiple dangers of a job shortage.

An international dialogue should begin now. It might open with an invitation to the Troika: Explain why Greece should not start a jobs guarantee policy today.