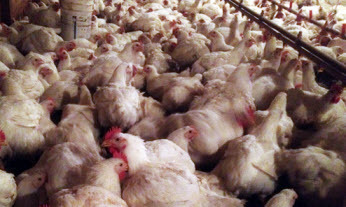 Yesterday, August 24, was the 48th anniversary of the federal Animal Welfare Act (AWA), a groundbreaking law establishing minimum standards of treatment for animals... Well, some animals.

You see, while some animals used for research, as pets, or for exhibition are considered worthy of minimal legal protection (and to be clear, the AWA protections leave lots of room for improvement), animals used for food, like farm animals, are explicitly left out. Other federal statutes, like the 28 Hour Law and the Humane Methods of Slaughter Act cover livestock transportation and slaughter, but both exclude birds, and there are no federal laws at all governing the conditions in which farm animals are raised.

The big question is: Why?

Do the over 9 billion animals farmed in the United States each year require less protection? No. Should we allow them to endure extreme cruelty during their lives just because they're destined for slaughter? Certainly not.

If anything, considering how many farm animals there are and the direct link between farm conditions and food safety, farm animals require more attention, and their conditions more scrutiny. As the products of agricultural corporations, farm animals are among the most exploited and abused animals in the world.

You don't have to look very hard to find documented cases of cruelty against farm animals or on-going practices that fit the very definition of torture, such as battery cages for egg-laying hens and gestation crates for sows. In late June of 2014, Compassion Over Killing released undercover video from a poultry farm in North Carolina that showed sick and injured chickens being dumped alive into pits of carcasses, where they suffocate or expire of hunger, thirst or exposure.

Instead of working to fix these abuses, the factory farming industry uses its influence to keep them secret by trying to pass "ag-gag" laws, which prevent video or photographic documentation of farm activities.

Ironically, this anniversary comes only a week before the start of National Chicken Month, an annual September promotional exercise by the National Chicken Council to promote chicken sales and to celebrate chicken consumption -- which, in effect, also celebrates the cruel ways we treat those very chickens.

But imagine, for a moment, a very different "National Chicken Month," one in which we ensure chickens are not abused, exploited, or tortured. A month in which we highlight farmers who treat chickens more like the animals they are, not like the products they become.

Some states are acting on their own to institute farm animal protections, and we hope that trend spreads throughout the country and on the federal level. But even before that happens, there are things we all can do to help.

We urge concerned consumers to ask their supermarkets and the companies that supply them to think about raising chickens that can stand up and be chickens, not be pumped with unnecessary antibiotics and bred to be so absurdly huge that they fall over in their own waste. And we encourage people to sign our pledge, urging more humane industry practices.

Whether it happens on the federal, state, community, or personal level, action must be taken to safeguard the welfare of all animals, no matter what purpose they serve.