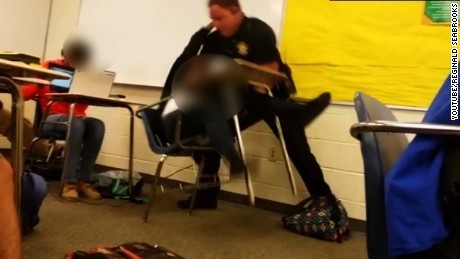 When the latest horrific act of excessive, out of control violence by a police officer against a young black girl at Spring Valley High School hit CNN and the social media loops, did you think about withdrawing from the fight, exhausted and overwhelmed by it all? Did you want to distance yourself from the pain and anger? Or did you ask yourself how you would have been able to deal with the situation if that teenage girl, who was violently flipped and dragged still pinned in her desk, was your daughter, granddaughter or niece? Did your stomach hurt, your head swell with disbelief and anger?

I started worrying. What if all these video recordings exposing us to yet another police officer's over the top force against an unarmed citizen may be taking its toil and wearing us out emotionally? What if repeated witnessing of these injustices will, eventually, lead us to withdraw, just as a matter of survival?

It is painfully clear that the police are routinely brutalizing, bullying and killing us. Not all of the police, to be sure, but way too many of them have certainly developed a devastating disregard for some of us: the young, black, brown, poor, transgender, intellectually disabled, immigrants of us. In other words, the most marginalized of us.

What if most Americans, especially those who don't feel connected to the most vulnerable of our residents, can't handle seeing another despicable act on their news feed? Are we in danger of paralysis?

Suppose that instead of us getting to the tipping point for change that so many of us are hoping for, we get so emotionally exhausted by it all that we retreat, go back into our complacency, go shopping instead of showing up to protests, go back to voting for candidates who don't care instead of demanding real policy changes from our officials.

What if we even stop posting or talking about the last horrible video? How long can we sustain our outrage when, in so many cases, there appears to be no justice for the victims of the type of abhorrent violent behavior we are witnessing?

I also wonder if many of us are more afraid of the police after witnessing their actions in all these recordings. I believe these viral commercials of police intimidation work in the police's favor, promoting more social control.

I know that the Mayor of Chicago, Rahm Emanuel and FBI Commissioner James Comey have voiced concerns that police are reluctant to do their jobs now for fear that they will be caught on video and their lives and careers will be ruined.

According to them, this reluctance could explain the rise in crime in urban areas. But watching those kids motionless in that Spring Valley classroom while they observed such violence against their classmate and hearing what they were told would happen to them if they intervened, it is clear to me who is more afraid, and it's not the police.

That classroom was a microcosm of so many communities in this country that have experienced firsthand this type of intimidation, this kind of social control. Even suggesting that the Black Lives Matter movement is causing more crime is an attempt to scapegoat, manipulate and induce fearful compliance.

I was never afraid of the police before this past year. For years now, I've been living a life of privilege, an unpoliced life. But the other day, in this year of being up close with the truth of police brutality, I was driving down the highway a little too fast and caught sight of a police car behind me. And I became aware that so much has changed. As I acted to quickly decelerate, I felt my heart rate escalating. All this exposure to police misconduct has caused me to be more compliant, hoping to avoid all police officers. I fear that I might encounter that out of control officer who is triggered just by the fact that I am a black woman with a sense of my own dignity.

I have decided however, that my response to this fear and the sense of rage and hopelessness that creeps in each time I watch another terrifying incident is to be vigilant, and not withdraw. I can't withdraw; I won't withdraw.

Every testimony I hear from young black folks living in their over-policed communities of Baltimore, where I live, helps me stay focused. They have bore witness and experienced this kind of violence for a long time; some of them have grown weary and petulant, but I am inspired by the ones who have decided to speak up and demand justice.

Recently JC Faulk, the creator of Circle of Voices, and I facilitated a powerfully enlightening conversation in Baltimore, where the death of Freddie Gray has awakened many to police brutality and the structural racism that has created black neighborhoods of concentrated poverty.

Hadji Bakara, a graduate student from the University of Chicago, had just finished presenting to us a horrible story that most of us had never heard about - the literal torture, over decades, of more than 100 black men in Chicago by police commander Jon Burge and his henchmen, and the long and hard battle of enraged citizens to bring this man to justice and seek redress for the victims.

Bakara believes that we have to stand up and fight against inhumane treatment of others, even if we don't consider them part of our tribe; if we don't, we make space for atrocities to take place somewhere else against another group. While some of us see injustices and stand up and fight for others, many of us do not.

We asked people that had come to the Circle of Voices session, men and women of different racial/ethnic and socioeconomic backgrounds to find someone in the room who they didn't know and thought of as being different from them in some significant way. Once paired, we asked perfect strangers to confide in each other about where they find themselves ignoring the pain of other groups and why they choose to do so.

The group found a strange and unexpected comfort in revealing where and why they detach and in finding out that we all close our eyes to some group's pain. When we inquired about why we move away from the pain of others, the reasons were many: too much to bear emotionally - too sad, too angry, too confused, too embarrassed; being afraid of the "other;" ignorance and guilt; not knowing how to make a difference; worried you will make it worse or won't be welcomed by those you are trying to help.

They talked about the truth of trying to preserve one's stuff; one's sense of control, energy, sanity, safety and one's life. This is the truth of where we are in America right now. There are so many feelings that urge us to turn away and some of us have the privilege to ignore and separate from the struggle. Some of us don't. Our strategies for surviving this fractured society prevent us from experiencing and drawing upon the power of community.

If we hope to save cities like Baltimore, our children in South Carolina, our country and our world, we cannot turn away from the stories that make us sick to our stomachs. We say, "Enough! I've had enough. I can't deal with another one of these." But these utterances cannot be a declaration of retreat, but a rallying call of a personal re-commitment to being part of the change.

Every week, we must meet with emotional fortitude each viral victim, each unfathomable act of disregard for human life, and each official denying culpability. We have to "stand our ground." I probably can't stop holding on to my convulsing belly, shaking my disbelieving head and quieting my screams when I see these videos, hear stories about the torture of black men and the testimonies of the young people illegally detained in their communities, but I am not going to turn away.

When we embrace our pain, the pain of others and even the anger, we stay connected and we resist surrendering to fear and a sense of helplessness. I feel most encouraged about the possibility for change, when I come together with folks who are trying to make a difference, people of all backgrounds like those coming out to our Circle of Voices conversations on a Sunday night, breaking bread and breaking down barriers. I am seeing more people asking questions, joining protests, tweeting, posting, prodding, and that makes me hopeful. Most importantly, I see people in our circles building new communities of conviction. While cameras may be causing some police to cower, they are empowering those who have been bent down and controlled by fear for too long to stand up.

This is the time we cannot afford to avert our attention. Everything counts, little and small when you are trying to move the needle toward justice. Spending time to take in the face of a stranger, building trust across difference and finding a way to be part of the beloved community - this is my antidote for the distance, fear, exhaustion and paralysis that threatens to undermine our resolve. Let the cameras record, but in addition to watching, let's get up, go out and move closer where you can feel and see that change is possible. Let's move toward the pain not away from it. This is what strengthens our empathy and builds our courage for change. Most of us seek security and a sense of control, but it's by moving closer to our suffering and the suffering of others, that we realize we are not alone - and that this is the safest place for us to be.