Are lobsters funny? To a lobster comedian such as myself, the question itself seems like a joke. While we can all agree that man dominates the field of comedy, it can no longer be argued that lobsters are, by nature, not hilarious. But what can we do to get more lobsters out of their shells and into comedy?

Today marks the nationwide release of the all-lobster stoner comedy, Potheads. The amount of lobsters in this movie is unprecedented. 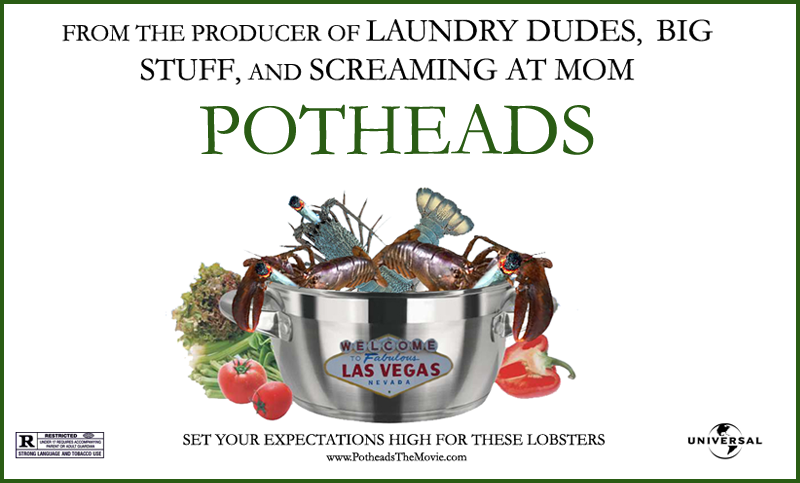 However, the fact that the movie was written by two lobsters and stars even more lobsters should not be what people are talking about. We should be talking about whether the movie is funny: and it is. I laughed so hard I had to pinch myself and ask myself if this was real. And it was! And then I pinched the guy sitting next to me! Because I'm a lobster!

Gone are the days when a lobster must rely solely on jokes about how delicious they are, or how often they get drunk and almost let man cook them. Now, a lobster can get up onstage, star in a TV show or even write a hysterical, raunchy drug comedy like Potheads without having to rely solely on jokes about how delicious or un-delicious they are. (Seems like it's always one or the other!) The tides are turning, no pun intended. (Okay, maybe a little one.)

Still, the facts can't be argued with. The ratio of creatures who go into comedy is 10:1, man to lobster. Which means the talent pool (mind if I go for a dip?) is smaller. Many comedians, both man and lobster, believe that some lobsters are hired simply because they are lobsters.

The point is this: When I walk into a writers' room and see I'm the only lobster, I'm not surprised. I don't get snappy. (I mean, I do, but not like that.) I know I can handle myself. I'm not going to let myself get cooked just because I'm a lobster. I know a lot of lobster comedians feel pressured to let man cook them, which is how some of our funniest lobsters have ended up dead. I just walk in there and make a joke, because that's what I do. I say something like, "Who wants to go to Red Lobster and get some biscuits! Yeah, I'm a lobster! Get over it! I know I have!"

Though the controversial 2007 Vanity Fair article "Why Lobsters Aren't Funny" (by Christian Litchens) was later put in its place by the 2010 Vanity Fair article "Who Says Lobsters Aren't Funny?" (by some woman), here we are, still discussing the issue. This discussion has lasted longer than my home--the ocean! This whole thing would make me a little crabby... if I wasn't already a lobster.

Litchens argued that biologically, lobsters don't have a vertebrae, which, according to a University of Michigan study, is the predominant place in the body where jokes are formed. You know what I say? I say, "Mr. Litchens, you're the one who's spineless! I'm the one who gets heckled by creatures between five and six feet taller than me! Seriously, everyone looks like a terrifying monster!"

Clearly, if spines were where jokes came from, I wouldn't have gotten as many (mostly unpaid) gigs as I have.

But seriously, done bragging. Sorry. It was for a point though, right? Bah! Get the sand out of your twats! I can't! I don't have one! Callback!

So, I will leave you, the Internet, my dearest/only friend with this: If you're a lobster and you know you're funny, get out there and tell your best joke! It doesn't have to be about the beach, but, hey, if it is, go for it! The idea that lobsters aren't funny is as crusty as I am.

36 Of The Funniest Tweets About Cats And Dogs This Week