Where does the essence of masculinity and virility lie? What defines a man as a man these days and how far have millennial men come as far as the variety of emotions they are allowed to express openly?

Conventional gender roles and scripts have been molded from our society's mirroring of each specific religious, political and cultural needs. While a White Anglo Saxon Protestant boy might be encouraged to keep his emotions buttoned up as he goes out to conquer his destiny as an individual, an Indian boy might be taught that his success in school to earn the most money possible is about his sacrifice for not only his family, but his whole town back in India, and that failure would bring shame on all of them.

While American culture has in some ways opened up the options for children to wear a variety of colors and to play with gender-non-conforming toys (girls compete in all sports and boys can play with dolls), cultural scripts and norms still maintain their hold on adults and children when it comes to expression of emotion and sexuality. Male clients speak tentatively about their pain and shame at not satisfying their wives or lover when they lose their erection. They talk about not feeling worthy of their partners, because they can't give them pleasure. When I ask if their partners are able to feel pleasure and possibly have an orgasm with other types of stimulation, they may say they can but may add: "It's not the same though because I'm not succeeding as a man." The millennial man has been the subject of much writing and discussion.

Men between the ages of 18 and 34 accept that their future partner will be working outside the home when they raise a family. They contribute more to the household chores and childcare than their predecessors and are more likely to move if their partner/wife got a job in another city.

In Richard Linklater's recent film, Boyhood, the young boy Mason (played by Ellar Coltrane) is sternly scolded by his stepfather for not being tough enough when the family moves to a different city and the child is unable to say goodbye to his best friend. Instead of crying, the child sadly gazes past houses he will never see again, his stoic face betraying his sense of loss. This stepfather subscribes to the ideal that to be a real man one keeps his "weak" feelings to oneself, although (spoiler alert) we later see the step-father numbing his feelings of insecurity through alcohol and then expressing his inadequacy and sense of weakness through domestic violence.

Many men in my practice are slow to reveal the extent of their shame when it comes to problems in their sexual life. They come in hoping I have a quick fix for them. Sometimes, some education and a few sessions on how to give themselves time to relax before a sexual encounter is all he needs. But in many cases, it takes several sessions to unravel the strict bindings of male codes so that a man can speak honestly about what is getting in the way of having pleasure with his partner. Sometimes, if he feels he has to always be focused on his partner's pleasure, he loses his own and may have trouble coming to orgasm. Perhaps his partner begins to feel anxious if her/his male partner closes his eyes to try to connect with the sensual experience more fully. 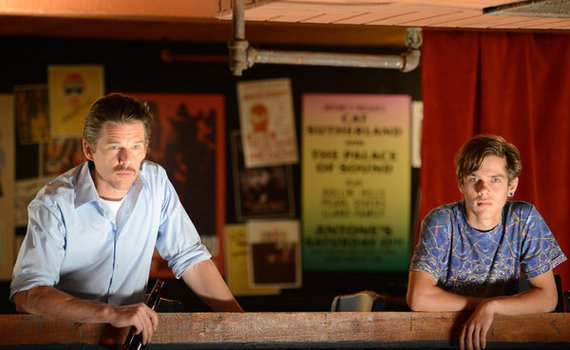 Later in Boyhood, Linklater shows us Mason as a teenager experiencing his first love and heartbreak. While talking to his biological father (played by Ethan Hawke) about the subject, he expresses his pain, confusion and sadness. His father tells him that he is proud of him, as he is "feeling things" and that this is nothing to be ashamed of, but rather, embraced. The film ends, indeed, with the young man Mason exuberantly declaring,"We are always 'in the moment." This statement of perception, awareness, mindfulness and emotional experience clashes with the traditional view of manhood as stoic, measured and unemotional. Linklater seems to be arguing for the millennial fathers to allow for more emotional fluidity for themselves and their sons.

One of my recent clients discussed feeling judged by co-workers when he took a leave of absence from work due to illness. It was as if they didn't believe him, thought less of him, or thought he should "man up" while going through a serious health treatment and still show up at work. It was as though this health condition was a moment of weakness, and my client felt he was judged as less masculine since he was unable to continue with work while receiving treatment.

I have found that when men begin to feel like it's safe to express their feelings with me, whether it's about the sex life they want, their sense of anguish at losing a child or the ability to get off the fast track and find a satisfying job that offers an appropriate work/life balance, they feel more confident to discuss it with their partners. It is my role to help their wife, girlfriend or lover in couples sessions to adjust to a new couple dynamic that evolves once their male partner's previous hidden feelings enter the relationship.

A recent article titled Lean Outprofiled Canada's most successful male CEOs who decided to leave their job or accept a demotion in favor of spending more time with their children. The image of the archetypical masculine man is rapidly changing as the stalwarts of the corporate and business worlds reframe their priorities and definitions of happiness and success as a modern male. Twenty, or even 10 years ago it would seem absurd for a top-ranking leader in business to leave their prestigious job to spend time with their young children -- historically a decidedly women's realm. With these young CEOs, tradition notions of male power and masculine roles as the breadwinner of the household are being turned upon their ears.

In Showtime's Masters of Sex, William (Bill) Masters, the pioneering sexologist and researcher in the early 1960s, offers a traditional man who is trying everything possible to hide from his true emotions. While the show is set in the past, it provides apt reflection upon our society today. Bill's inability and unwillingness to openly discuss his emotions and feel attached is exactly what causes the impotence with which he has struggled. Bill has been having an extramarital affair with his research partner Virginia Johnson (these events based on history; the pair eventually married in 1971) for years, yet both characters categorically refuse to see their actions in such a light. Instead, they simply say they are conducting the research, and that the work they are doing has little to do with their emotions and all to do with science.

Although I have seen many couples come in for treatment when an affair by the man is discovered by his wife, I have also worked with men who come in on their own who have had relationships outside their monogamous relationship and want to put a stop to their behavior (even when their partners have not discovered the truth). These are men who have felt like their voices have not been heard, or men who feel entitled to what they want without having to be honest about it. A man like Bill may have erectile problems with their wife and want to prove they still can do "it" with someone else to safeguard their self-esteem as a man.

Both Boyhood and Masters of Sex present complicated male characters from different eras who struggle with how much of their emotional selves to share, with whom, and when. As gender roles shift in our society, it is time to reevaluate ways in which men are still restricted in their behavior and communications at work and in their most intimate relationships.