Are Muslims of Europe the new scapegoats of Europe? Are they destined to be a kind of "Ersatz Juden"* or surrogate Jews, such as those at the beginning of 20th century on the eve of Holocaust?

In the same way an advertisement serves to commerce, a propaganda serves to politics. It is not strange that in the midst of an intra-European crisis that scapegoats are in high demand. History teaches us that the weakest were always the best candidates for this role. Unfortunately, today this role is reserved for the Muslims of Europe. It seems that spitting in the face of Islam best compensates for political unpopularity!

No matter how much Islam and Muslims are perceived as a threat, (and no matter how huge are their own internal problems), in reality both are much more victims than culprits of the dangerous interventionist policy of Euro-Atlantic alliance in the last two decades which created chaos in the Middle East. If we follow the despair in this principal living space of Islam (only in Syria the number of killed has reached almost 500,000 people!), we can easily see that there is a prolonged state of siege, both internal and external. That siege deepens suffering and horrors of the people of the Middle East on a daily basis and further destroys the social tissue and cohesion of its societies. It drives millions of human beings to look for security and safety somewhere outside of the war zone. And recently the most popular destinations for refugees (not immigrants as they are very intentionally misnamed!) were lands of the West. Paradoxically, they seek refugee in the lands of those governments who more or less caused their turmoil by unprincipled interventionism. Today's crisis in Syria has reached its peak and is seriously threatening a major world conflict.

Recently, French President Francois Holland gave his contribution to the heinous propaganda of satanization of Islam and Muslims. President Hollande told the authors of book that was published under the title "A President Shouldn't Say That..." and authored by two investigative journalists of Le Monde (Gerard Davet and Fabrice Lhomme), that "France has a problem with Islam." The journalists composed the book from their private interviews with Hollande and reported sometimes very open views of Mr. Hollande on various issues both in France and internationally. In the book, as Le Monde reported recently, President Hollande confessed about the problems with Islam and Muslims. He is reported to have said that there are too many immigrants arriving in the country who "should not be there." "It is not that Islam poses a problem in the sense that it is a dangerous religion, but in as far as it wants to affirm itself as a religion of the Republic," reads some of the quotes from the controversial book. "I think there are too many arrivals of immigration that shouldn't be there," Hollande told Davet and Lhomme, the journalists of Le Monde.

Probably the biggest problem in Europe today, for which it was claimed that represents the civilization founded on reason, is that it more than ever lacks humanity imbued with emotions. It was the concept of homo sentimentalis that contemporary European philosophers elevated to the level of value. However, this value is obviously loosing itself in the aftermath of the wider crisis of European identity. This is very visible in the highly developed societies of Europe and especially in France currently led by Mr. Hollande. There is an apparent problem of the populist movement that clearly indicates the troubles with identity. We could have seen this in the "unexpected" success of Brexit. What is next? What is the next stumbling of Europe?

When the protest erupted in the suburbs of Paris ten years ago in which cars and buildings were set on fire, it was intentionally called by some media "French Intifada" framing it in the Arab-Islamic colouring. But these riots were against limitations of integration, specifically against non-economic integration. These were classical Western-style riots, and not the clash between East and the West... Demonstrators demanded for themselves and for their children the same what others already had.

There is a general problem in Europe, especially in France with the populist movement, which can cause serious damage to the idea of Europe. For what is the identity of today's Europe and is it possible at all? No one can provide an answer this question right now. That should not be the problem on its own! But, if we consider the cases that all of the problems of Europe are being addressed to the endangered and ghettoized immigrant communities and that these accusations are coming from the most prominent political offices of the Old Continent -- then there could be serious consequences not just for Europe but for the entire world. This can be seen in the announcement of Nicolas Sarkozy (if he gets the nomination of right-centre), who promises very rigorous anti-immigrant policies in France.

A year ago, in October of 2015 when Eastern Europe faced thousands of refugees, similarly alarming was the Prime Minister of Hungary, Victor Orban. After waves of refugees who were expelled from their homes in the Middle East, Mr. Orban (ex)claimed that "Islam never belonged to Europe." After the issue calmed a bit and after we all saw that Mr. Orban had a problem with EU immigration policy that was led by Merkel's Germany which Hungary could not follow, we also figured out that the Hungarian Prime Minister actually had reached for the easiest solution: stirring up fear against Islam and Muslims. Did he solve the problem? No! Actually, his statement caused the reaction from Bosnian Grand Mufti Husein Kavazovic who warned Mr. Orban of his ignorance towards the historical fact that Europe for centuries had native Muslim communities. Luckily this debate ended with mutual visits that resulted in opening of cooperation between Hungarian Government and the Islamic Community in Bosnia which aspires to be a role-model for integration of European Muslims. 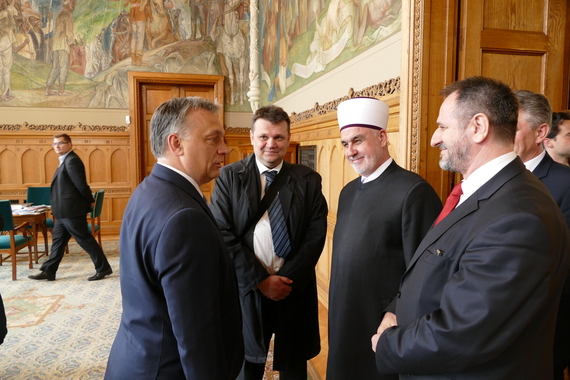 But after Mr. Orban who eventually showed willingness to open all channels of cooperation, we now have France, a much stronger European nation that relied on the immigrant work-force for more than a century and which now has one fifth of its own population composed by either immigrant or immigrant-born people. The question is where can this dangerous rhetoric lead?

Are we witnessing the same propaganda like the one actively promoted against the Jews of Europe at the beginning of the 20th century? We all know where this kind of hatred can lead. Are the Muslims of Europe the new scapegoats of Europe? Are they destined to be a kind of "Ersatz Juden" or surrogate Jews at the beginning of 20th century on the eve of the Holocaust? Unfortunately, Europe has proved more than once that it has the capacity to turn into darkness and that it failed its promise "Never again" in Bosnia and Herzegovina. It is very dangerous when current (geo)political problems are being attempted to be resolved by shortcuts and fears, by populism that is the main indicator of the identity crisis.

For, what is the identity of today's Europeans? Do I as a native European Muslim have the right to ask this? Is Europe a Christian continent? Does it uphold Christian values? Is secularism a mere separation of state and church or is it a kind of artificial national ideology? Or is it a fake myth? Does anybody actually know what it means? Do "secular values" exist at all? Maybe President Holland should have answered these questions before! Maybe they would have helped him to find a scapegoat for his extremely low popularity.

* The term "Ersatz Juden" or "surrogate Jews" used Ambassador Murad Wilfried Hofmann in interview he have to this author in May, 2006. describing the trend of islamophobia in Europe.