A host for an Atlanta sports radio station show suggested that there be a cartoon with a sign outside of the NFL, reading "Number of days without an arrest." Underneath it, the digital number would read zero.

Hardly a day goes by where we don't see the video of Baltimore Ravens running back Ray Rice knocking out his fiancée in an elevator, or hear about Minnesota Vikings star Adrian Peterson beating his four-year-old son's legs bloody with a tree branch, or learn how Jonathan Dwyer got arrested for punching and head butting his wife.

Is that really the case? Are NFL players more violent than the average population, or less so? Is the problem getting worse, or actually receding? Is the NFL's personal conduct policy helping or hurting the situation?

Believe it or not, this is not a new subject. In their 1999 article "Criminal Violence of NFL Players Compared to the General Population," in Chance magazine (published by the American Statistical Association), Alfred Blumstein and Jeff Benedict examine the book Pros and Cons, which claimed that 21.4 percent of all NFL players had experienced one or more arrests for something "more serious than a minor brush with the law." 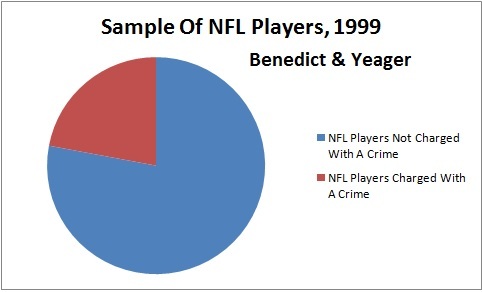 Benedict and Yeager's study data, as reported in Blumstein and Benedict's 1999 article.

Writing in Seton Hall's Journal of Sports and Entertainment Law, Anna L. Jefferson points out that "56 current and former football players... were reported to the police for violent behavior toward women between January 1989 and November 1994." She recommended the NFL commissioner have the power to punish domestic abusers.

Since then, the new NFL Commissioner Roger Goodell instituted a personal conduct policy, giving his office the power to punish players for such acts. The law is controversial, as some claim it does not go far enough, while others think it is too harsh. Is it working?

Lisa Wade, an associate professor of sociology at Occidental College in Los Angeles, wondered that as well. Her results are published in the Pacific Standard Magazine.

Using a database of cases from USA Today of all criminal accusations against NFL players since 2000, she compared those numbers to a the national average of men the same age as NFL players. And here is what she found.

Wade found that NFL players are actually are actually far less likely to engage in such criminal behavior than the national average for men of the same age. Moreover, while the number of NFL player criminal acts rose from 2004 through 2008, it has steadily fallen since (despite a slight increase in 2013). In fact, the 2014 season has (by far) the fewest numbers of player arrests, citations or criminal charges since the study began. Of those charges that did occur (2000-2014), DUIs are the most common problem.

So despite the headlines of arrests and the poor initial choice of a lenient punishment for domestic violence, the personal conduct policy is working for the NFL. And with each arrest and suspension for those few foolish players, the others are getting the message. With millions of dollars at stake in lost revenue, NFL players are actually behaving themselves much better than the average population.