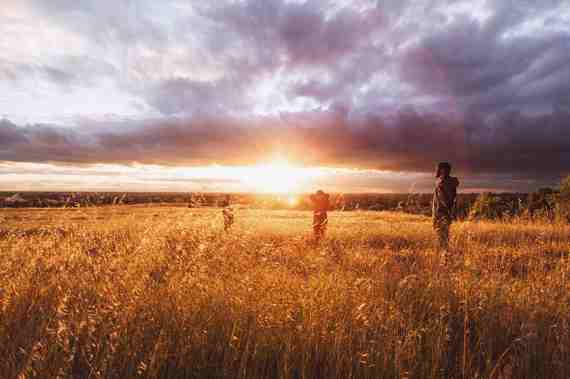 Scientists of various sorts have been monkeying around with religion for some time. Charles Darwin's famous voyage on the Beagle was a high seas pilgrimage on waves of faith and doubt, after all. Ultimately, Darwin cast himself as a religious skeptic, but he continued to wonder what role religion plays in the thriving of the human species.

More recently, a group of scientists raised a different set of evolutionary questions about the nature of religion. As reported in The Atlantic last month, a study of "Chimpanzee accumulative stone throwing" led by researchers at Max Planck Institute for Evolutionary Anthropology in Leipzig, Germany revealed among separate groups of chimpanzees in West Africa practices of throwing stones at the bases of specific trees. The researchers suggested the trees might be "sacred" sites where chimpanzees gathered not for mating displays, social bonding, or some other obviously functional purpose, but rather for ritualized proto-religious behaviors not unlike those of many of our human ancestors.

If chimpanzees--our nearest evolutionary relatives--are expressing an inherent primate religiosity with these stone gathering rituals, might it be the case that we share a genetic predisposition for religion? Is being religious part of our human nature like using symbolic language or gathering with others of our kind? If it is, is it something we can cultivate as a species, but that we can't really erase? If this is so, does belief in God or attending worship services really matter in terms of "preserving religion"? Won't religion express itself in one way or another no matter how secular we believe we're becoming?

These are reasonable questions to ask in a time in which it is impossible to avoid the streams of demographic data and commentary that tell us that Americans, among many others around the world, are increasingly leaving behind religion--at least in its narrowly institutional sense. Some 23 % of adults in the U.S. do not identify or affiliate with an institutional religion--30% for the under-30 set.

But we also know increasing unaffiliation doesn't necessarily, or even predominately, mean a move away from the kinds of ritual practices, experiences of wonder and awe, and quests for meaning and purpose that have traditionally been associated with institutional religion. Though levels of belief in God and the doctrinal teachings of religions continue to decline among Nones (as well as among some of the religiously affiliated), the Pew Forum reported substantial increases in the percentage of Americans who report "a deep sense of spiritual peace and well-being" (up 6% since 2007) and in "wonder about the universe" (up 7% since 2007). Such feelings don't always translate into self-identification as "Spiritual-But-Not-Religious" or the development of idiosyncratic and, some would say, shallow and narcissistic spiritualities. Rather, findings from my own national study of the spiritual lives of America's Nones suggest many people are setting aside the institutionalized trappings of religion anchored in "believing, belonging, and behaving" in relation to a specific religious community, its teachings, and practices in favor of more fluid, evolutionary, this-worldly religiosity that adapts and changes along with other aspects of life.

In Choosing Our Religion: The Spiritual Lives of America's Nones, I argue that many Nones are not so much "loosing their religion" as they are revising, repurposing, and finding new ways of expressing what may very well be a "natural" religious or spiritual impulse. One of more than 100 Nones I interviewed for the book, a 49-year-old woman from Belleview, Washington I call "Catherine," put it this way:

I like to think I've grown spiritually over the years. Sometimes I look at some of the things I used to be into--"The Angel Years" when I was in my twenties, for instance, or the Native American drumming--and I can't imagine putting my energy into that today. But at the time, it meant something. It helped me, I guess, to feel that I was surrounded by all these "angels." I learned some things. ... You know, I was such a "New Ager." I was into that for sure. ... And then I moved on. I tried different things--Twelve-Step groups, therapeutic touch, meditation. I was an Episcopalian, sort of, for a couple years. Now I practice yoga and I meditate regularly. I'm really a None. Or, maybe, an All-of-the-Above. I guess None is what's working now. But parts of all the rest are still there one way or another. If I need them, if they make sense, they're there for me.

What counts as Catherine's "sacred tree rituals" have evolved as her life itself has changed. But that's not an evolution away from religion toward secularism, as Enlightenment thinkers assumed would happen as modern, scientific progress marched on. It's a matter of spiritual adaptation to changing life circumstances. "Once you're aware you're just going through the motions," she told me, "if you're heart's not really in it, you're not able to give much anymore to yourself or the people around you. For me, that's always a sign that I've stopped growing. It's a sign I need to find another way."

When I came upon the Chimpanzee reports, I couldn't help but think about my late dog, a beautiful Akita named Maya, who walked with me every morning through the Oakland Hills when I was in graduate school. Every once in a while, at the crest of a hill or the edge of a meadow, Maya would pause and gaze out at the surrounding landscape. Sure, she could have been sniffing for potential predators or, more likely, for other dogs to play with. I know my experience of her contained a good measure of projection. Still, I always sensed that she was onto something spiritually significant that I wasn't completely able to grasp. Maybe this was part of what the Jesus of the Christian gospels was pointing out when he advised his followers to look to the natural world--to birds and wildflowers--for the truest teachings of divine ways.

Nones like Catherine, or Atheists who insisted that their service to people in need constituted a form of "prayer," often seemed to have a much greater attentiveness to the sensibility I saw (or imagined?) in Maya. Maybe, after all the religious shuffling going on right now settles a bit, we'll be able to see that Nones are something of a "missing link" between a more primal, and perhaps more authentic, religiosity and the institutional edifices we've constructed in all too human attempts to contain and control an organic spirituality that is our genetic, evolutionary legacy.