In response to the video of a little boy "twerking" at Pride celebrations in Brazil; the ire it is causing and how it is being exploited by anti-gay groups, let me start by saying I love and have attended Pride and I understand its significance as (1) a defiant march to show the world that LGBT people are actual human beings from all walks of life and are unafraid and unashamed of who we are (2) a walk of commemoration of our heroes and triumph over centuries of hate, injustice (3) a platform to highlight existing issues that still need to be addressed to ensure we are in fact free and equal citizens of our respective countries to which we pledge allegiance, contribute our taxes, contribute our intellectual, creative, charitable efforts and sometimes even our very lives in its defense. 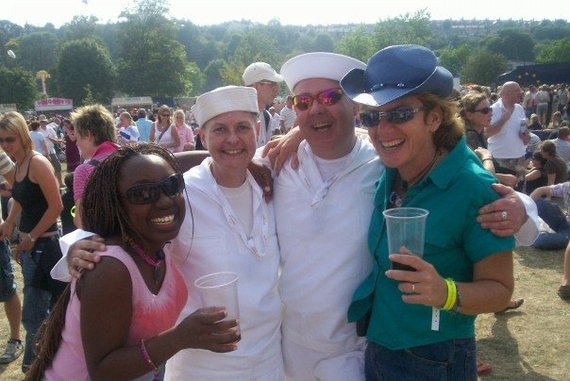 At Brighton Pride in Preston Park

I also understand why the other side of Pride, the celebratory party apsect and the chance it affords to be free in one's own sexual skin has basically overtaken the parade's other raisons d'êtres. Any opportunity to unload burdens of repression and revel in one's personal freedom is often a far more powerful and immediately empowering experience than making a serious statement. I can grasp the dichotomy of the festival on a particularly visceral level because I was raised in Trinidad and Tobago where Carnival is a similar mix of serious themes of old tradition and the wild hedonistic celebration of freedom.

The pre-Lenten festival brought over by French planters evolved after Emancipation when the freed slaves, much to the shock of the plantation owners, did not seek bloody retribution but instead took to the streets, beating their African drums, dancing and chanting songs of liberation. Today Carnival retains this tradition of handing the streets over to the people who become living art. Carnival is an explosion of color, creativity, music and dance. It is an exorcism of the demons of oppression and remembrance of traditional culture. For many this is a time to make serious artistic, intellectual statements and political commentary. Masquerade creators like Brian Mc Farlene create poignant traditional street theatre. Rapso bands like 3 Canal make music chanting down oppression and inspiring love and unity. Calypsonians write scathing satirical commentary on the local politicians and there is not a damn thing anyone can do to muzzle it. I expect next year's Carnival to have some side-splitting satire on Jack Warner and the FIFA fraud (by the way great job John Oliver, lots of Trinis enjoyed and agreed with every point you made) in both song and masquerade portrayals. 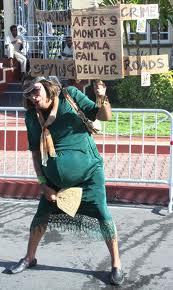 However, like Pride, Carnival has also evolved to include a massive party of unbridled revelry. From J'ouvert (pronounced joovay and means "day opening" in French Patois) Monday Morning non-stop to Mardis Gras, Trinidad's streets are flooded with hundreds of thousands of people, all ages, races, nationalities, sexual orientations, shapes and sizes. Every kind of alcohol from Johnny Walker Blue to Grey Goose to homemade over proof bush rum flows like water and ganga smoke wafts through the air as bodies gyrate in sensual abandon to pounding soca music from massive speaker trucks. Doctors, lawyers, teachers, nurses, businessmen, Parliamentarians, Hollywood celebrities dance like there is no tomorrow, rubbing shoulders with farmers, janitors, street hustlers, artisans and the unemployed. As one of our soca artists says, "If you have no taxi fare or if you is a millionaire we just don't care." Richard Branson, Idris Elba, Will Smith, Halle Berry, Mick Jagger, Carmen Electra to name a few come just to get lost in the anonymous melee of this adult street part and by adult I mean Rated R.

THIS PART OF CARNIVAL IS NOT FOR KIDS!

Now, just as I love Pride, I am also self-professed "Carnivalian" (a Trini who loves a fete, playing J'ouvert and mas/masquerade). I see it as a wonderful release of all inhibitions, well not all, but a reasonable amount to feel completely reinvigorated. I love to dance to soca and I love to wine! 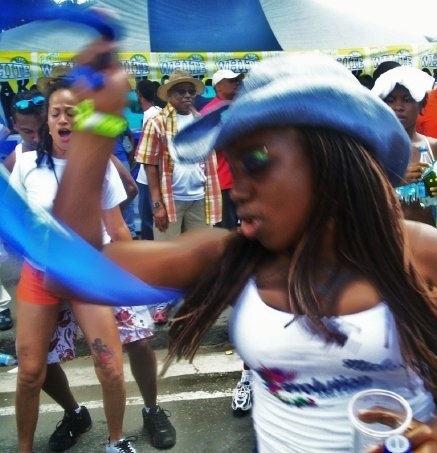 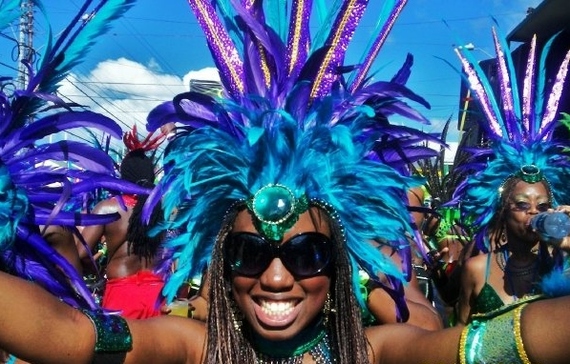 I'm a tried and true "Carnivalian" so don't expect me to judge any adult gay or straight for dancing with wild abandon in the street in a skimpy costume.

"Wining", a pelvic thrusting, rotating movement is the traditional way Trinis dance and both women and men do it (it is not seen as "gay" for Trini men to gyrate their hips) alone or together as the instinctive response to the rhythm of soca. The hip gyration is an isolated movement from African, Indian, Amerindian dance and Trini culture is a hybrid of those cultures. Go to an Indian wedding in Trinidad and everyone including old aunties will be wining. Go to an Afro-Creole wedding and it will be the same thing. I went to my partner's younger sister's wedding (they are a white Trini family of Portuguese/English decent) and guess what, once that soca music hits, everyone's waistline gets loose. A Trini child learning to dance the way their people dance will be learning to do this, just as a Lebanese child will be learning their traditional belly dance, just as a Hawaiian or Tahitian child will be learning their traditional dance and the Brazlian child the samba. All of these involve learning pelvic gyration.

Some cultures do not necessarily see this movement as pornographic or an automatic invitation by the dancer to come have sex with them. It is just seen as one's exuberant spirit being expressed and a thing of beauty in its own right. I know that to many of you this is confusing as hell because everything associated with mid-section (hips, pelvis, buttocks) body movement is seen as too scandalous to be done in public, by anyone and a child doing it is even more of a culture shock.

However, because of my cultural background, I was not scandalized by the awkward "pressao" (what some call twerking) into a split, attempts of this enthusiastic Brazlian boy in the video that is sparking all this uproar. I was scandalized by something else entirely, where he was doing it.

Context is everything! For even in my bacchanal frenzied Trinidad where heterosexuals don't stop partying just because they become "respectable" members of society, parents or grandparents and it is not uncommon for a young adult to run into their company's CEO or older relatives breaking loose at the very same party or Carnival band, it is still frowned upon to have little children at adult events. We give children their own separate Carnival parade one week before the main street party, so they can have their G-rated family fun in their cute, colorful costumes and face paint accompanied by their parents and teachers.

There is a time and place for kids to have fun and a time and place for adults to do the same. Adult masqueraders who see children on the road on during their days for grown up revelry will give disdainful looks to the irresponsible parents who could not be bothered to find a babysitter and do not have their priorities in order and there will be "shame" pics posted of it on social media. None of my Trini friends were allowed to play adult mas until they were over 16. Even when they came of age, they had to play with their parents' mas band so their folks could keep a watchful eye on them (See the last part 8:44 of this video )

So I ask do LGBT parents feel a similar responsibility? Do Pride Organizers have any responsibility at all to the sizable number of the LGBT community (straight allies included) with kids? What about LGBT kids and young teens, are there age appropriate ways and spaces for them and their supportive parents to celebrate Pride? Can we ignore the fact that despite the festival's origins in serious human rights roots and as a social activist platform, is has indeed transformed into a sexually charged, adult street party in most parts of the world? Is it possible to have two different Pride parades on two different days, one for families/ activist groups and the other just for an adult street revel? If not perhaps there can be separate itineraries for daytime and evening and/or two different parade routes? Most of all, when irresponsible parents bring their kids into the very adult spaces of Pride shouldn't there be proactive discouragement of this within our own community? Can we afford the repercussions we know all too well, if we do not? Can we discuss these things without it degenerating into an attack?

Regardless of other people's personal tastes and beliefs about nudity and open sensuality, I am very grateful not to live in a repressed, theocratic regime and instead be in a society where folks can enjoy so much personal freedom of expression in public. Every Pride, every Carnival for me is living proof there is indeed freedom of expression. However all this freedom comes with responsibility. Kids come with responsibilities and some spaces are simply not age-appropriate for them.