Screens are everywhere these days -- we have phones, tablets, TVs, computers, and just about everything in between. Even our cars come with multiple screens in our dashboards in overhead for the kids to watch, because it would be almost criminal to take a long drive and make them stare out the window or make up games to play on a road trip. No matter where we are, we have entertainment at our fingertips in ways we never imaged 20 years ago, thanks to the progression of technology. Our society as a whole has become very impatient, and with social media, we can get instant gratification from our besties no matter how far away they are from us. 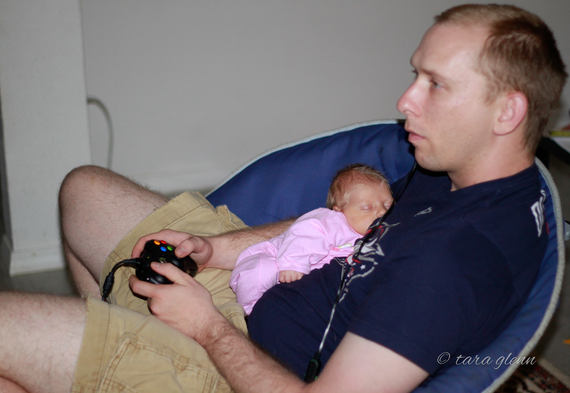 Dr. Jeffery Dew, Associate Professor in the Department of Family, Consumer, and Human Development at Utah State University recently conducted a study of how social media use, video games, and TV use affects our marriages. Dr. Dew and his co-author, Dr. Sarah Tulane, surveyed over 1300 couples, and asked them about their social media usage, how often they played video games, and how much T.V. they watched on a day-to-day basis. They also asked them questions about their marriage and how the couples felt about the quality of their marriage and how stable they felt their marriage to be - such as asking how likely their marriage was to end in divorce. They didn't expect social media norms to come out in the study, but their findings were stereotypical for the most part overall.

Interestingly enough, men didn't seem to mind very much when their wives were the ones utilizing social media more often. Women have always loved to socialize, and it isn't very surprising that they're taking it online with how fast-paced our society has become. But, the more time that the husbands used social networking sites, the more dissatisfied the wives became, and the couples also recorded that they also saw an uptick in conflict within the marriage, as well as increased feelings of instability.

One could obviously speculate that the wives would feel insecure if their husbands were on social media often, as they may worry their husbands are looking for female companionship outside of their marriage. Of course, not all men that utilize social media websites are looking for companionship -- they may simply live far away from their loved ones, such as those in the military community, and social media may help fill the logistical gap separating them from their loved ones. However, according to Dr. Dew's study, the wife would still be upset with the husband if he were using social media more than she was. Of course, the biggest reason for that would likely be that their wives just simply want to spend quality time with their husbands, and as we all know, it is really hard to spend quality time with someone that is continually entranced with a screen.

Dr. Dew's study also included TV usage, as well as gaming. They found that couples are watching TV together more than ever as a way to wind down and relax, which makes sense in our unstable economy -- many couples are not able to afford to go out and the next best thing is a Redbox DVD and a takeout pizza for date night. However, when it came to gaming, no matter which person was gaming more, there was less marital quality associated with the marriage. Most people would speculate that this is because when one person is gaming more than the other, that the gamer may be neglecting aspects of the relationship or their responsibilities so that they can participate in their gaming.

Overall, they found that typically, whenever a husband or wife went outside of the stereotypical social norm that there were issues that arose in the marriage recorded in their responses. However, even though the findings were there, Dr. Dew stresses that they were not super strong, and that in some cases the differences where only about a third of a point. But, even so, I truly think that the findings are so relatable in today's fast-changing society and can help us make sense of some of the feelings that we have towards social media and the way that technology is flooding the market today. Whether we like it or not, technology is here to stay and it will affect our relationships, but thanks to committed researchers like Dr. Dew and Ms. Tulane, we can use these studies to help educate ourselves and not fall victim to statistics within our own marriages and relationships.