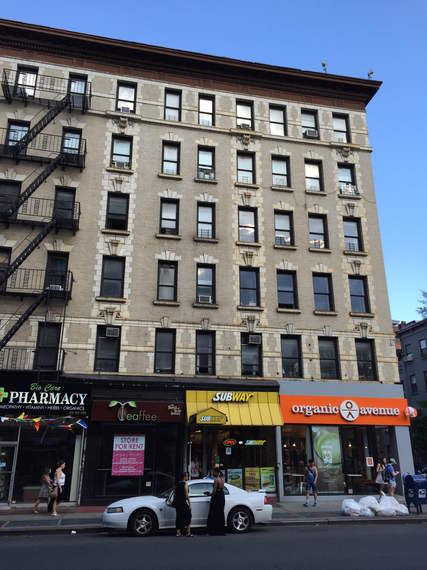 I got back to Brooklyn around 9 p.m. on Memorial Day after a trip upstate visiting a friend in Ulster County.

I knew I had food upstairs, but I was out of milk.

After a long weekend riding a bike up and down hills, swimming in a cold lake, then riding back to the city, sunburnt in the back of cramped car, my legs were numb, lazy was my middle name and the very idea of walking a few blocks to get a quart of milk was akin to crossing the desert.

Fortunately, there's a small deli exactly one block from my place in Carroll Gardens. The only problem, I knew the place closed pretty early.

I'm ashamed to admit that I'd never given the little nondescript shop much thought. I usually buy food, including milk at the bigger stores such as Trader Joes on Court Street or the Key Food on Henry Street a few blocks away.

Tired and impatient, I hobbled down the street, the closer I got, the more anxious I became and then halfway down the block, my worst fears were realized, the deli's gate was down.

"Aww Dang!" or some other choice word I whined to the wind.

At least, I thought it was just the wind that heard me.

"Where you live?!," said the voice from the cars lining the street.

I looked around, and saw the man I believe to be the store's owner. He asked me again, "Where you live?"

I told him just a block away. He asked me what I needed. I told him milk.

"Oh!" I said, "You don't have to do that!" I was reduced to babbling because I was taken aback by the kind offer.

He insisted. He came back from his car, took out some keys, rolled up the gate, turned on the light and directed me to the milk. Still babbling, I paid the man, and walked home with a warm heart and a little more zip, all the while vowing to tell my neighbors what had just happened.

His sweet gesture and very smart business move put a whole new spin on the significance of keeping it local.

Small merchants, such as my deli are among the threads that weave so many New York City neighborhoods together into a community.

But, across the city, we've heard that a number of smaller retailers have been pulling down their gates for good. Smaller merchants in high-end neighborhoods are losing out as landlords raise rents or hold out for the next bank or a well moneyed chain store.

Retail chains are expanding at a quicksilver rate in New York City. The think tank Center for an Urban Future said in its 2014 State of the Chains report that from 2013 to 2014, 309 chain retailers grew their footprint in the city from 7,288 stores to 7,473 stores. Leading the way, Dunkin Doughnuts, which expanded its New York City footprint by 21 stores to 536 locations city-wide. Also during that same one year period, 7-Eleven grew its city footprint to 135 locations, up from 123 in 2013 and 59 locations in 2009.

Some might say that unless your business is part of a chain, or you happen to have bags of cash, it's become increasingly prohibitive to open a small retail shop in New York City. Vast portions of neighborhoods once celebrated as the launching pads for creatives such as the Lower East Side, East Village or Williamsburg Brooklyn are now considered blue chip.

In my own neighborhood Carroll Gardens Brooklyn, a few smaller retailers shut the doors, including a neighborhood pharmacy and a small cafe, both reportedly priced out by high rents, a sad reality realized when it came time to renew the lease.

And that got me thinking about my deli.

I didn't go prying around and ask the deli folks "so, how's business?" or, "how much do you pay in rent?"

Instead I'll make it a point to give them more of my business. I'm simply more aware of their presence, their contribution to my community.

To better understand the nuts and bolts of what is happening to parts of New York City's retail landscape, I reached out to a couple of real estate experts.

Jeff Karp, the head of the commercial division at RP Miller Realty Group said retail prices are soaring and that the sky's the limit.

He said the majority of his buyers for commercial property actually prioritize the retail space more than what's upstairs.

Mom & pop retail is getting priced out of places it once thrived. Parts of New York City have become increasingly prohibitive for the mom and pops, he says.

"Compared to New York City, retail rents are relatively much cheaper everywhere else. When you're selling the same widget for $20, and your rent is $55 per square foot in Tulsa or Chicago, but it's $200 per square foot on 3rd Avenue in New York City, the latter becomes much more difficult to keep the business above water, " Karp told me.

But when the smaller local widget retailers disappear, so too does the genuine pride of ownership and caring that a home owned shop offers.

In my old building on 57th Street and 3rd Ave. there's an old Greek shoe cobbler who does the best work in the city and at a reasonable rate. Even though I would be ready with my ticket to pick up my shoes, he would grab them from behind the counter as soon as he saw my face come through the door. And that's out of a pile of hundreds of shoes. He would then take them out and inspect them to double check the perfection of his work. And whatever I had brought them in for, whether it was for a patch job for the soles or to put on taps, he would always shine them perfectly free of charge. He wanted the shoes to look their best even if it meant more work for him.

Still, he says, from the real estate business perspective, it's a double edged sword.

Big rents are here and big businesses are paying them and that's a sign that the economy is doing well and that New York City remains a major destination for blue chip retailers. On the flip side, many of the smaller businesses that give the city its famous character are suffering and might even be headed for extinction.

But, he said the irony of the benefits those local merchants provide shows up in many of New York City's small retailer lifecycles.

Vancura, who is the former acting director of research at the Newman Real Estate Institute at City University of New York said as a diverse local retail mix nurtures a commercial corridor, the area gentrifies and becomes a destination, but then, property owners' opportunity costs end up preventing the owners from sustaining lower-rent neighborhood tenants.

"Over the course of decades, this pattern presents a model of small-scale local retail's self-destruction," said Vancura.

He said when real estate is valuated, highest and best use is often interpreted within the boundaries of the property itself, not taking into consideration economic impacts on the surrounding area.

Vancura said some of the barriers small retailers face in many New York neighborhoods could be overcome by sustainable planning practices that are both public-led and market-driven.

Private-sector strategies are easiest to implement in newer large-scale master-plan developments. The Avalon Christie/Bowery Place complex at Houston & Bowery is a good example. While the first phase of development included "big-retailer" Whole Foods, subsequent phases incorporated spaces reserved for boutique retail along 1st Street. While the developer recognizes the advantage of a diverse mix of commercial tenants, increasing value of the project's residential component, this approach would not be feasible if the developer is building only a single small building.

On the public side, he said neighborhood retail, is most successfully supported through land use regulation, direct financing, various tax incentives or promotion by civic organizations.

All that left me thinking about how much this amazing city has evolved over the past 25 years. After all, once a lot of New York's grit was wiped away and segments of its economy grew, it wasn't just retail rents that shot up. So too has the cost of housing, transportation, food and every other necessity.

That said, the hope remains that property owners, developers as well as residents recognize the value add small local retailers bring to a neighborhood, its identity and the sense of community.

As much as I love Dunkin Doughnuts, I doubt employee A or B would roll up the gate after they'd closed so I could get my doughnut fix.

My big fear is that many of our city's commercial corridors could evolve into the familiar, impersonal, generic retail mix that embodies the very essence of what so many of us came to New York to escape in the first place.