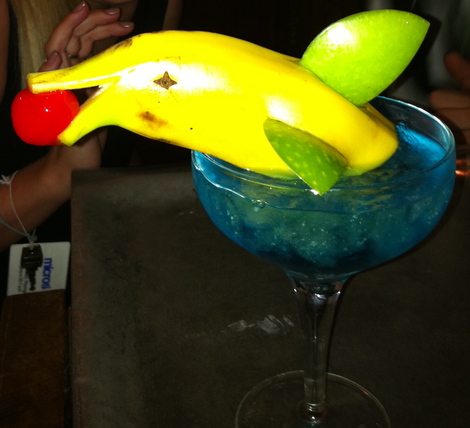 A new year traditionally causes people to rethink their relationship with alcohol, often brought on by a bad experience over the festive period; be it dipping your toes into degenerate alcoholism caused by being trapped in a house with your family for a whole week, to starting the year with your face firmly planted in a bucket, to discovering exactly what your mother is capable of when jacked up on mulled wine.

I do however believe that an actual demon lurks in some drinks, waiting patiently to strike. So in the hope of saving souls from these predatory monsters in 2015 I have decided to name and shame them back to hell once and for all.

1) Sambuca, Especially If Some Clown's Lit It

Combining alcohol with fire is never that good an idea, despite what your inner pyro might tell you after a few drinks. But Sambuca makes it legitimate. I've now lost track of the number or times I've seen people down a shot of flaming Italian licorice only to do a pretty decent dragon impression seconds later as it shoots out their nose. However one thing I will say for the whole fire and Sambuca thing is that if you're lucky it might burn out your taste buds before the flavor actually hits them.

In ancient times, soldiers celebrated victory by drinking this oily, thoroughly charmless Chinese spirit infused with the flavor of non-biodegradable plastic. And profound survivors' guilt is the only thing that could make this stuff appealing. Back demon. I banish thee!

Dante never actually covered it as such, but there's a special circle in hell for the person who invented this herbal nightmare. Leaving aside the whole popularity with the Nazi party thing, the taste, the look, the way it sweats out of your skin the morning after as you cling for dear life to the porcelain god whilst your girlfriend stands above you laughing only goes to prove that some kind of twisted monster lurks in every icy, enticing bottle, preying on poor judgment.

4) Anything With More Than Two Ingredients That Claims To Be A Martini, And Absolutely Anything That Drops The "Mar" Out Of The Word Completely.

Much like your parents, every fibre of your body from birth to somewhere (conservatively) in your late teens, rebels against the taste of a martini. Yet once you develop the taste (for martinis that is, not for your parents), then God help anything else. So how have we reached a point where something made with Peach Schnapps and vodka infused with crushed Oreo biscuits gets to call itself a martini? Or no doubt a Biscuitini. The only rational explanation is that it's a portal to hell through which the forces of evil can enter this world. Beware.

Without a doubt the most dangerous, deviously subtle monster in the entire alcohol canon. It seems so harmless at first, with its salt, and its lime, and it's syrupy promises of good times. But I can honestly say that every time I have ever danced on a table, fallen asleep on a table, removed an inappropriate amount of clothing on a table, before dancing and then falling asleep on the table, and once when I tried to prove I could lick my own nipple at a staff party, tequila was involved. Damn you tequila. Damn you to hell.

Did we miss a particular demon? What form did it take? Let us know below.

Dan Miles is the cult bestselling author of Filthy Still - A tale of travel, sex and perfectly made cocktails. "Hilarious. Like an alcoholic's Bridget Jones." Akashia Hoosein. London Lifestyle Magazine.