Introduction
Cross-national comparison of educational performance has become an important building block for national educational policies (Martens, Rusconi, & Leuze, 2007; Meyer & Benevot, 2013). The PISA data, collected by the OECD, has become one of the main tools for this cross-national comparison, and the number of participating countries outside the OECD has increased strongly since the first PISA wave of 2000.
The participation of Shanghai in the PISA measurement since 2009 has opened a debate whether the published outcomes for Shanghai are representative for the 15 year old pupils living in Shanghai. Some authors (for instance Loveless, 2014) suggest that only pupils who are legally living in Shanghai are sampled and thus a very substantial proportion of the 15-year-old pupils without Hukou (permission to migrate from the Chinese countryside into cities like Shanghai, and which is obligatory for entrance into high school) are omitted from the sample. It is clear that Hukou is still relevant in modern China and that is influences educational and occupational opportunities of immigrants from the Chinese countryside into the cities (see for instance Zhang & Treiman, 2013). But the relevance of Hukou in modern China is no prove of the omission of pupils without Hukou from the Shanghai PISA sample.
This research note adds to this debate by comparing the educational performance and social background of pupils of first and second generation immigrants from China mainland into Hong Kong, Macao en Shanghai. All three cites have substantial number of these pupils. Immigration into these three cities from mainland was and still is difficult, due to economic en legal obstacles to establish oneself in these cities. But an immigrant needs also a Hukou as an additional requirement for a legal settlement in Shanghai, while a Hukou is not needed for Hong Kong or Macao. If the PISA sample of the Shanghai pupils is representative for the whole population of 15-year-old pupils, one would expect minor differences in educational performance and social background, especially of first generation pupils (= born in mainland China, thus not born in Hong Kong or Macao), because it is equally difficult to enter each of these cities, migrating from the countryside. If the PISA sample of the Shanghai pupils contains only the pupils, who lives legally in Shanghai, one would expect major differences in educational performance and social background of first generation pupils (= born in mainland China, outside test-city) and second generation pupils (=parent(s) born in mainland China, outside test-city), and these differences would be in favor of Shanghai pupils.

Data
I use the PISA 2009 wave and selected only those pupils in the test-cities Hong Kong, Macao en Shanghai who were born in mainland China outside these three test-cities or of whom at least one parent was born in mainland China outside these three test-cities. If both parents are born in one of the test-cities, the pupil was excluded from the analysis. First generation means that the pupil is born in mainland China and not in the test-city. Second generation means that the pupils in born in the test-city but at least one of the parents is born in mainland China outside the test-cities. I follow the method and data-coding more elaborately described in Dronkers & Kornder (2014).
Reading and math scores are the averages of the five plausible values at the reading and math test. 500 is the average score of the test of the OECD pupils, with a standard deviation of 100. Mixed marriage means that one parent is born in the test-city and another parents outside the test-city. ESCS is the index of the economic, social, and cultural status of the parents. This variable represents a composite index created in the PISA dataset of the parents' occupational status (Ganzeboom, de Graaf, Treiman and de Leeuw, 1992), the parents' educational level (United Nations Educational, Scientific and Cultural Organization, 2006), and the presence of any material or cultural resources at the pupils' homes. This combination of the parents' occupational status and educational level together with resources at home produces the strongest indicator of parental environment (OECD, 2010). The ESCS score was standardized such that the OECD average was set to zero, with a standard deviation of 1.00. Native reading or math scores. These indicators are the average PISA score of the total native population of the three test-cities. This variable serves to approximate the quality of the destination country's educational system. 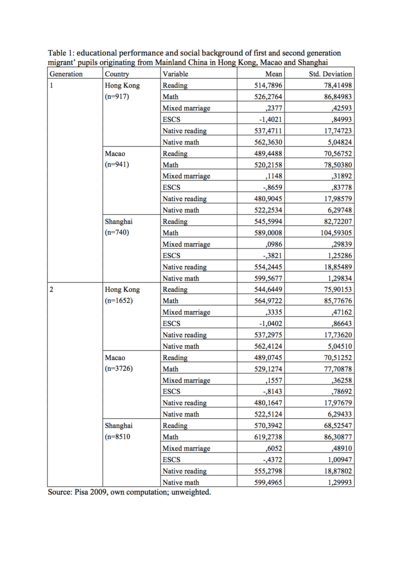 Table 2 tests whether the background variables have the same impact on the educational performance of migrant pupils from mainland China in Hong Kong, Macao and Shanghai.
The impact of parental socio-economic background on the reading score is stronger in Shanghai (30,9) than in Hong Kong (17.1= 30.9-13.8) or in Macao (12.6=30.9-18.3). The same holds for one-parent born in test-city (16.8 versus -7,3 and -5.9) and only for Macao the second generation (18.0 versus 24,3 and -0.8). The results for the math scores are analogous. 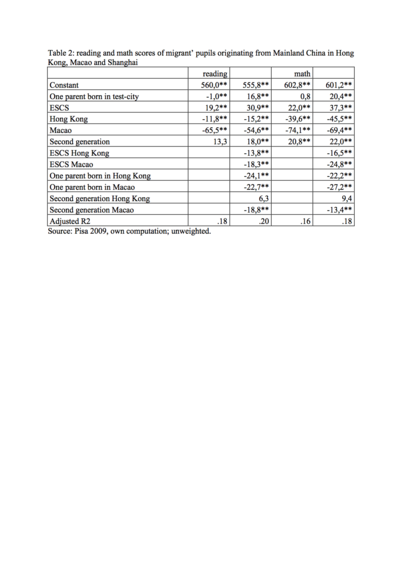