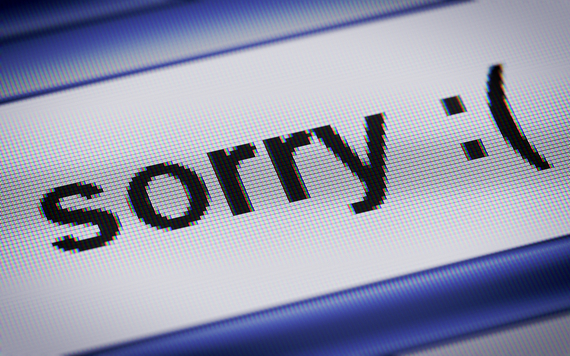 Jason Landman's stateroom on the Carnival Miracle vibrated from the moment his ship cast off in Long Beach, Calif., until it docked seven days later. "It shook and rattled literally from start to finish of the cruise," he says.

When he complained about the noise in Cabin 7243, he says a cruise line representative offered to either relocate him "temporarily" to a different room or to give him earplugs. He couldn't move because he was next to his elderly in-laws, who needed his assistance.

"No further compensation was offered, and we felt that we were just brushed off," says Landman, who works for a hotel in Las Vegas.

I asked Carnival about Landman's cruise. It reviewed his case and decided that as a "goodwill gesture" it would refund 20 percent of his cruise fare and offer him a 15 percent discount on a future sailing.

Landman wants to know: Is that a sincere apology?

It's a timely question. Companies are constantly apologizing to their customers, but the recent news cycle has delivered two high-profile mea culpas for travelers. Volkswagen last month said it regretted rigging some emissions tests, stating it was "deeply sorry" that it betrayed the trust of its customers and the public. United Airlines' new chief executive, Oscar Munoz, is on a national apology tour, admitting the company hasn't lived up to customers' expectations since its 2010 merger with Continental Airlines.

For wronged travelers, simply having a company admit to a problem is a good start. But gauging the sincerity of the apology is not always so easy.

Although there's no magic formula for determining whether an apology is genuine, there are indicators of good faith, experts say. They include the right timing, sufficient remorse, an offer to be transparent and cooperative, concrete actions and appropriate compensation.

One of the hallmarks of a sincere apology is its promptness. "Are they doing it because the clock has run out and they have no choice?" asks Dan McGinn, a reputation management expert based in Arlington, Va. "A public apology, when it ultimately comes, is often too convoluted to be of any real value. The wording is carefully calibrated to express regret, without accepting responsibility."

An apology like VW's, which came soon after the scandal hit the news, is more compelling than United's, which issued via full-page newspaper ads years after the painful merger with Continental and subsequent low customer-service scores. (It's also more convincing than Carnival's, which came only after a consumer advocate asked about Cabin 7243.)

For an apology to be effective, a company must admit its guilt. And that can be difficult, according to Matt Brubaker, a corporate messaging expert with FMG Leading. "In many cases, public apologies are really not apologies at all, but PR statements designed to minimize risk, eliminate negative consequences and save face while sidestepping the actual wrongdoing or misstep," he says.

Another sign the apology is legitimate is whether it is accompanied by a sincere expression of remorse, preferably from someone at a high level, according to "When Sorry Isn't Enough" co-author Jennifer Thomas, a researcher specializing in the psychology of corporate apologies.

"You have to not only express regret but also say that you're sorry for the hurt you've caused," she says.

By that measure, VW and United put a few points on the board. Both apologies came directly from the CEO, even though they were a little vague about the damage they caused their customers.

Credible apologies also have to include a promise to do better, says Gary Frisch, who has covered the VW apology for the Bulldog Reporter, a public-relations trade publication.

"A good apology needs to include the promise of transparency -- from the offer to cooperate with any investigation to taking questions from the media and answering them as fully as possible," he says. "The minute you say, 'No comment,' or walk away from the microphone without a Q&A, you've lost the public's trust."

The apology must also be accompanied by action, like taking Cabin 7243 out of the Miracle's inventory, improving airline service or even finding new leadership.

"You look at their actions," says Rasheen Carbin, who handles PR for a technology company in Oak Brook, Ill., "not just their words."

Carbin says by that standard, VW's mea culpa, which came from its (now former) CEO, Martin Winterkorn, was pretty sincere, "not because it was especially heartfelt but because he lost his job. Nothing shows the public that you're serious like someone getting fired."

Munoz didn't offer a way to contact him directly in his newspaper ads, instead pointing the public to a generic company Web site. That hasn't gone over well with some of United's customers.

Compensation is another element of a sincere apology -- maybe the most difficult of all. How do you make things right?

"A business should offer a refund, replacement or an additional gift item or service to show its sincerity," says Toni Coleman, a McLean, Va., psychotherapist and relationship expert. "This would truly say, 'We are sorry, value your opinion and business, and want to serve you again.' "

Carnival's offer certainly fits that bill. It's still unclear how VW will compensate its customers, and United hasn't offered its passengers any kind of make-good for the years of dreadful service they received.

No apology is perfect, of course. Landman isn't turning down Carnival's money, but he is unsure whether he'll ever book another cruise with the line. VW owners are stuck with their vehicles, and United's customers are unlikely to defect to another airline, now that most competition has been squeezed out of the industry.

Anyone care to apologize for that?

More:
travelcompanysorryapology
Newsletter Sign Up
An essential daily guide to achieving the good life
Subscribe to our lifestyle email.
Successfully Subscribed!
Realness delivered to your inbox