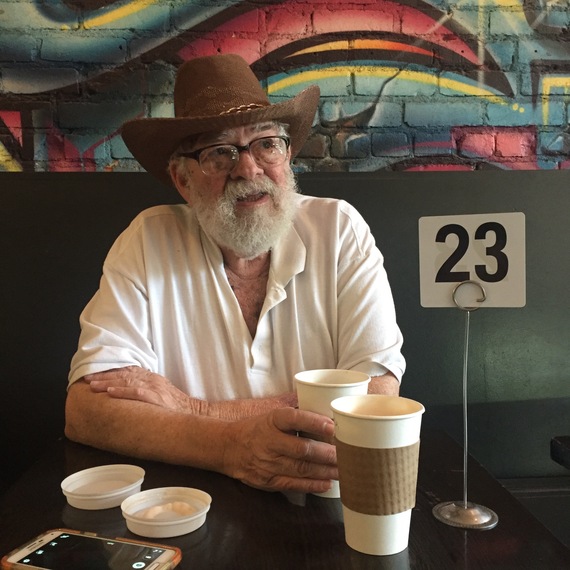 I woke up to yet another morning pondering whether this is the way you go out when time is passing you by. Yeah, I am old, a bit worn out in spirit and in body, beaten by my job as a wire service journalist as well as a whole world that is passing me by.

All the young ones insist they have it down right. To me, their music sounds alike and trite and pitiful, but they tell me it puts Bach and Beethoven to shame. I know of one modern young woman who insists that Heavy Metal is modern Beethoven -- I'm afraid I sneered at the notion. And I know she is wrong.

I might have worked in journalism for at least half a century, but they tell me that they got that down as well. To me, their writing all reeks of what we used to call "headline journalism" -- short and pithy ways of saying nothing. Spare me the nonsense.

Hey kids, you simplify to meaninglessness, and pretend it is profound. You use algorithms that force simple words to sound profound. I'd like to say this is just an electronic rediscovery of penny journalism from the days of Pulitzer and Hearst. But electronically created phrases are still no better than Pulitzer's "Go West Young Man." And Hemingway and Shakespeare also wrote some simple old 'grafs, as fine as any of them to be found with the help of algorithms.

There's now no separate language for advertising and commercial. If you can peddle, you're special. You can even be called a journalist, even if you're also a puerile voice for the commercial. That's a way of dismissing real journalism, where truth not credo or profit remain the reason to write.

Ever since Thomas Jefferson and Thomas Paine, religion and politics were purposely kept separate. Now that seems less true. Now, you're the highest form of being -- the commercial proselytizer who's selling snake oil -- when you allow a "business school" kind of education to dominate.

That's the danger of Donald Trump's Wharton School of Business, where businessmen are valued above all others.

I don't know if all the stupidity and arrogance of the new generation can be summed up by the likes of Trump, a real estate mogul who acts like he's a combination of Einstein, Beethoven and Mark Twain -- but he is, in fact, a lying son of a bitch who talks like a used car salesman with all that you might expect of one. He's highly educated, he says, because he graduated from some glorified "business school." I always thought the very idea of a "business school" replacing the real art of literature and science with the voodoo of babbitts says where we're going wrong again.

Trump's nothing but a scumbag. I also know for years he happily dabbled with fascist images he displayed on his walls, so I'm not surprised by the way he's been acting now in the last few months.

He probably read old Sinclair Lewis' It Can't Happen Here, written in 1935. Trump's character reeks of the same fascist character as in the novel, Buzz Windrip.

Windup was a kind of fast-talking salesman and U.S. senator based on the character Huey Long, a Depression-era fascist. Worse, he was trying to bring a new Mussolini era to the United States -- if not a Hitler era.

Trump is so much like Windrip, it's hard to tell what's real and isn't real. Maybe it's not fair to say that America now faces fascism in this day and age when it was a real threat 80 years ago as well.

But there is a certain fear that the emergence of a Trump suggests an obvious weakening of the culture -- a time when everything has become cheap and in severe decline.

I wonder if perhaps I'm wrong. Some of the "radicalism" of the young ones is surprising -- look at the appreciation of Bernie Sanders. As an old '60s type, I'm used to socialists who are not communist, but they are not capitalist, either.

When I grew up, people like Sanders were not unusual, but few got the attention he is today. As a youngster, few socialists filled stadiums with their fans, although I know there were powerful socialists in 1910.

Yet Sanders is getting more votes and bigger crowds than Trump.

I speak, by the way, as the fellow whose former roommate was the socialist party leader in Los Angeles. A sort of boring enough fellow -- of course, I looked down on him a bit because I was a Stalinist in those days and socialists were passé. People like Sanders seemed mostly mundane, mostly political. And yet here's the fellow winning all those votes as a socialist politician. And it's not particularly his writing style -- Obama was a far more literary fellow than he, for example, and that really pleased me -- even if I feel closer to Bernie's politics than Obama's politics.

Maybe I did make a mistake about this day and age.

Perhaps it makes sense since this generation really is getting nothing from school. Here we are, stuck in this crumbling disorder, and suddenly socialism is popular. I mean I know Sanders will not become president -- I presume it will be Hillary, who is not the worst person in the world. But still, something is indeed amiss.

I think because I am a journalist, it strikes me hard that journalism is allowed to become commercially putrid. Still, people should understand -- being putrid really is no more than being putrid.

But maybe the truth about Trump is just that. He is either a peculiar aberration of our times, or maybe he's just a repeat of earlier times. A Huey Long of all times. The question always is what's real and what's not real. But I'm not going to tell you that Heavy Metal is our Beethoven. And Trump still scares the shit out of me.