I'm not the least bit ashamed to admit that I watch The Real Housewives on Bravo TV. All of them. It's one of my few guilty pleasures -- very guilty and somewhat pleasurable. Truth be told, it's just total escape television for me.

To be completely fair, I must also admit that every now and again one of the women actually says something meaningful and thought-provoking. Every so often something happens that actually gets me to sit up and think.

Which is exactly what happened a couple of weeks ago when I was watching The Real Housewives of Orange County and one of the women was talking about her step-children. She mentioned that they were her kids, and the other women flipped out on her. Not an uncommon event on this show, that's for sure.

"Those aren't your kids," one of the women jabbed. "They already have a mother."

Like most Housewives topics, the women all droned on and on until the issue was beat to death. In the end, the consensus was clearly that those children were not her children despite the fact that she married their father.

Been there, done that... with a few twists and turns as I say in my new book Out and About Dad.

My family is a mixed family too, and we have faced this issue many times.

While we were having a graduation party for my daughter at our house, I had a "guest" say right to my partner that my children were not his children. Right to his face; right in my house.

"Those aren't your kids!" Bam.

Sadly it wasn't the first time it was said to us.

Granted, my children have a mother and we've never done anything to detract from that fact. They love their mother. But the truth is that my partner helped to raise our two children -- every step of the way -- from making school lunches, to taking care of them when they were sick, to attending sporting events, to dealing with life's little milestones, if you know what I mean.

He was in the parenting mix just like the two biological parents.

But we never said anything to that effect. He never tried to be a mother or a father... He was just Christopher.

He was just family.

So as The Housewives debated the topic, I couldn't help but reflect on our own experiences especially since I just finished writing Out and About Dad and pretty much devoted an entire chapter to this issue called "Absolutely Nothing At All." As The Housewives were screaming at each other on the television, I couldn't help but wonder why they didn't just cut her a break. She feels like she's a mother; so let her be a mother. She is helping to raise the children after all.

If it's better to just not label it, then so be it. I get it. We never labeled it. But we did mark it all with something real: family.

So she may not be those children's mother, but she is their family.

Just like my partner is family. Actually now he's my husband, and he's family.

I must admit that I don't see the debate on that. 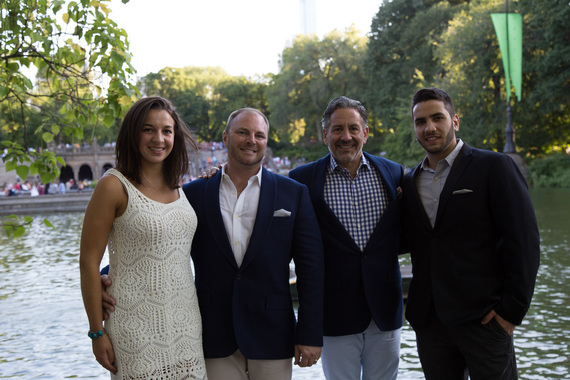 More:
Reality TVParenting Parentsstep childrenstep mother
Newsletter Sign Up
Raise the kind of person you'd like to know
Subscribe to our parenting newsletter.
Successfully Subscribed!
Realness delivered to your inbox