"Everyone's doing it" is not generally considered a great argument in regards to our health and yet when it comes to Photoshop and other advertising tricks a lot of people are saying that if we can't beat them, join them. And, surprising even myself, I think I agree. I use photo-editing software on my pictures for my fitness site, in fact. But in my opinion it's all a matter of scale. For instance, I crop and color-correct nearly every picture that I post (my camera sucketh mightily when it comes to lighting). I also have removed red eye, fuzzed out stranger's faces and -- my personal fave -- erased crotch sweat off of gym buddies who forget what a betraying fabric cotton is which frankly is the modern equivalent of not letting your girlfriend leave the restroom with her skirt tucked into her tights. (And let me tell you, nothing makes you feel close to a person like spending 15 minutes zoomed in at 200% to her lady business.) However, I have never used it to change my body (nor anyone else's) in any way -- not even to remove a zit. That's my line in the sand I guess. And I'll be honest, that's also my line of technical acuity. I'm not the world's greatest photo-editor. 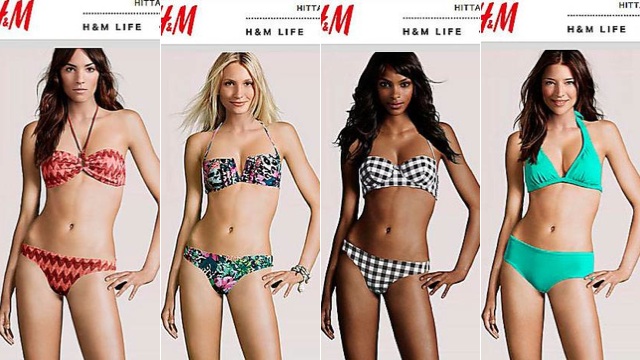 But there are plenty of people who don't share my compunctions. Take, for instance, the trendy knock-off store H&M who recently admitted that they only use "completely virtual" bodies to model the clothes on their site. Don't worry though, they paste a real girl's head on there to help you know what that dress will look like on a real person. Unless they forget, like this time (images via Jezebel & H&M): 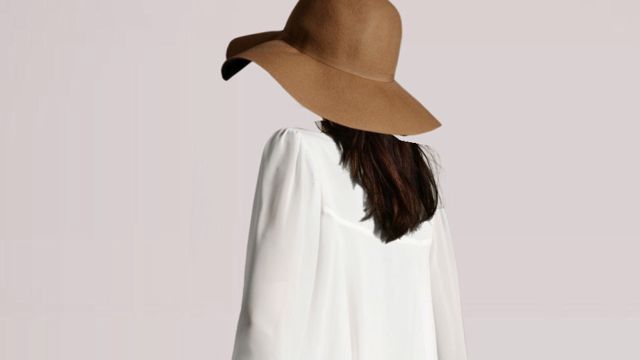 Granted, creating bodies out of whole cloth (pixels?) is pretty extreme. On the other end we have my sister's Christmas card from a few years back. As soon as I got it in the mail, I had to call her immediately. "What did you do to your teeth??" I squealed. "They are so perfectly white! I'm jealous!!" There was an uncomfortable silence before she answered. "Are my teeth really the first thing you noticed about our family picture?" I hemmed, "Uh, yeah." Her reply: "Oops." It turns out she'd thought her teeth looked a little dingy and since this card was going out to all her friends and loved ones she figured she's just digitally scrub them up a bit. A bit turned out to be a lot however, turning her adorable family pic into a toothpaste ad. We laugh about it now but since then I've seen a lot of holiday card pictures come through my mail from other folks that have obviously had a lot more than teeth whitening done to them.

How is a person able to decide what's real and what's not if even my neighbor's dog has been digitally cute-ified? Science to the rescue! Reports The Economist, "Professor Hany Farid, a computer scientist at Dartmouth College in New Hampshire, and his PhD student Eric Kee, have been investigating photo retouching. They have developed a mathematical expression to quantify ballooning bosoms and winnowed waists. Their paper, published today in the Proceedings of the National Academy of Sciences, describes how they use mathematical models along with subjective human responses to produce a score of how radically a person's image has been modified from an original photograph." So theoretically all images could now be labeled with a number telling where they fall on the reality scale, with Christmas cards on one end and H&M on the other.

What's your opinion on Photoshop and the like? Do you touch up your pics at all or do you prefer to stay au naturel? If such a "reality" scale number existed, do you think it would help to label photos with it? Are completely virtual models are brilliant business model or insanity?