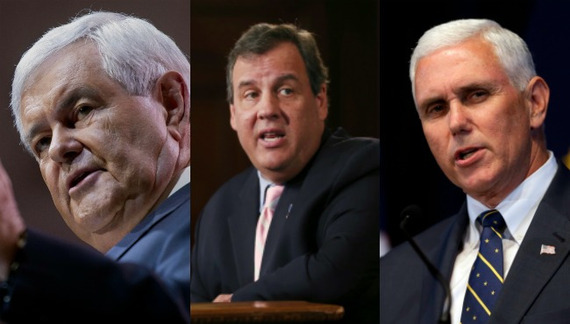 As the Veep stakes continue on both sides of the aisle, I was struck by the three potential candidates that are being most talked for the Trump ticket. Newt Gingrich, Mike Pence and Chris Christie. One thing each of these potential vice presidents share is their opposition to marriage equality.

Last year, Pence became the poster boy for anti-LGBT legislation when he signed the Religious Freedom Restoration Act (RFRA) into law in Indiana. Pence said RFRA "ensures that Indiana law will respect religious freedom and apply the highest level of scrutiny to any state or local governmental action that infringes on people's religious liberty." Corporate leaders nationally and in Indiana disagreed. The response was immediate with potential boycotts of Indiana by the NCAA and other corporations. Ultimately, RFRA was amended to have a "fix" to ensure that the measure did not discriminate against any Hoosier. Many in the LGBT community were not satisfied with the "fix."

Newt Gingrich and Mike Pence, both anti-marriage equality advocates that think the new front to attack LGBT folks is through religious freedom bills. Yet they are two of the top choices for VP on the Trump ticket? Talk about an anti-LGBT dog whistle.

Then there is Governor Chris Christie. His record on LGBT issues is mixed at best. No support of marriage equality or adoption rights. Christie has stated he stopped defending New Jersey's same-sex marriage ban because "when I know I've been defeated, you don't bang your head against the wall anymore and spend taxpayer money to do it." Presidential candidate Christie remained silent for two days during the Indiana RFRA controversy and finally said he was confident that Pence would fix the problem. To his credit at least Christie thought the law needed to be fixed after assessing the political winds.

I hope the LGBT community hears the dog whistle that is being blown concerning our rights and freedoms with respect to Trump's VP choices. If Trump wins, it may be a long hard slog to protect LGBT rights from being undermined by religious freedom bills. Remember the anti-LGBT legislation during the George W. Bush years? Revised RFRA legislation will be the sequel with Trump as president.