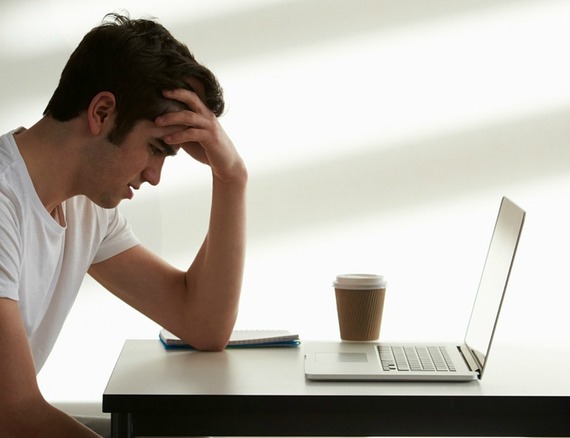 Growing up, we had been told by our parents, educators, and society in general that if we want a good paying job someday, we need to go to college. We never thought about the reality of what this entailed; we didn't think about the tremendous consequences of the debt, and the majority of us didn't have a clue what we even wanted to do after high school. Our senior year of high school, we applied to college and got in because it was the right thing to do. We were brought up to believe that if you go to a university, you will be successful. It was implicitly implied that if you went to a technical college, you weren't as smart and focused as those who went to a university for four years. Society pushed us, breathed down our necks, and essentially brainwashed us into believing that attending a university guaranteed success.

And we believed everything we were told because we were naïve and uneducated.

We are the generation that bought the sales pitch.

I currently have $21,788 of debt to my name, which does not include the interest that will incur throughout the years, or my graduate level education. I attended a liberal arts university and majored in psychology, obtaining a Bachelor's degree in 2014. I was indecisive the first three years of my experience so I dabbled in business, communications, and sciences; putting off my graduation for an extra semester.

As I went through my years at my university, I grew incredibly disappointed with how much I felt like my education as preparing me for the "real world." In my opinion, approximately 25% of my classes were useful and applicable to real life. I felt that the rest were a waste of time and money; useless information that I will never need to know for my career. I can't even count how many pointless theories, vocab words, equations, and terms that I had to memorize. I spent hours upon hours at the library, stressed beyond belief the majority of the time. I gave every ounce of energy I had towards memorizing information that I knew I would forget the second after I walked out of taking that exam, and spent thousands of dollars to pay for classes that felt I got nothing out of. And guess what? The majority of things that were ingrained in my brain I will probably never use in my life.

Don't even get me started about Gen-Eds. Yeah, yeah, I understand the importance of being well-rounded. But when universities force students to take classes that they don't even care about, the students really are not becoming well-rounded because they are half-assing their work. To become well-rounded comes from learning different cultures, traveling, reading books on your own time, trying a variety of different jobs and internships. You can't FORCE someone to be well-rounded, which is exactly what public universities try to do.

(Disclaimer: As I mentioned above, I am currently a grad student. I have different views about graduate level education because I am taking classes that actually pertain to my field; whereas during undergrad, I was forced to waste precious time on pointless classes about theories I'll never use.)

The problem is that universities today operate as a business.

Universities THRIVE on getting your money. Let's be real, that's what really matters. If your education really did matter, the student loan debt in America would not be up to its current rate of $1 TRILLION. What's even worse: According to Huffington Post, 73% of this debt was accumulated from 2003- 2011. To them, you are just another number; a statistic. You can't tell me that universities are not a business when I went to my university store to buy a box of cereal and the price was literally triple to what I would pay at a regular grocery store.

Another problem is that we had this notion in our head that a degree meant job security. We were too high on our horse to think that having a degree--ANY degree--guaranteed success. We were too uneducated to be realistic about the current economy and job market. What I learned along the way is that technical schools are a great alternative that offer cheaper classes and teach applicable real-life skills. Five years ago, I would have been embarrassed to get my Gen Eds completed at a technical school. Now, I regret it; I ponder the money I would have saved and cringe. Pushing students to attend a university is becoming so conventional that it is not really putting our generation to an advantage.

Because everyone is getting Bachelor's degrees and we all have the same credentials, the supply for work is too high and the demand is low.

In addition, there is a terribly negative stigma against the schooling for the careers that require only technical skills. We need our students to attend technical colleges just as much as universities so we HAVE those professions that require specific skill, manual labor, and expertise. Just like our society needs doctors, accountants, and lawyers, we also need EMTs, welders, and auto mechanics. Think about how you would survive without these people.
We push and push and push our kids through these universities, many of which don't have the necessary skills, drive, or focus to even graduate.

According to the U.S. Department of Education, in 2012 the graduation rate for full-time students enrolled in a 4-year university was 59%. That means that a whopping 41% dropped out! This tells me that not everyone is destined for a 4-year university. Sure, many students are and attain a great education in the process. However, the military, tech school, and working straight out of high school may be a better option for some students- (not everyone, but some!!)

If anyone tells you that you need to have a college degree to be successful, that's a bunch of BS. HELLOOOOOO, ever heard of Mark Zuckerburg, the creator of Facebook, who is currently worth $33.3 billion??? Do you know what he and Bill Gates both have in common? They both dropped out of Harvard their sophomore year to chase a dream! They learned business along the way and established their entrepreneurship skills with trial and error. I'm not saying that everyone is going to be successful by dropping out of college, but I AM saying that a college degree does not necessarily determine success. It has been ingrained in our heads that we need a piece of paper to be successful. This is not necessarily always the case. Some of the most successful people have earned money by creating their own path and learning from others by doing.

Still not convinced? Watch this video. It's brilliant.

The truth is that universities are not for everyone.

What can you do as a parent? First of all, help your child explore his or her interests. Encourage your child to job shadow in the field they may have interest in and perhaps do a summer internship.  Working on career exploration and self-discovery before enrolling into a university will be very beneficial. Then, sit down and talk about what may be the best direction for your child's future. Trust me, taking more time to weigh your options is a much smarter idea and may save thousands of dollars in the long run. Believe that your child will find his or her own path. Remember that ultimately it is not you who can make the decision. We are talking about your CHILD'S life, not yours.