Nuclear fusion is considered by many to be the holy grail of clean energy -- a technology that would transform the world, if only we could figure out how to do it. But harnessing the same process that powers our sun is no small task. Superhot plasma must be created and contained so that two hydrogen atoms can combine to form helium and give off a huge amount of energy at the same time.

The key to a successful fusion reactor design is magnets, because magnetic fields must be used to trap the heat and atomic particles in the device's reactor core. That's why attention is turning to MIT, where researchers supported by the U.S. Department of Energy and the National Science Foundation are proposing a new multi-billion-dollar design for a practical compact fusion reactor that includes some impressive new magnet technology. 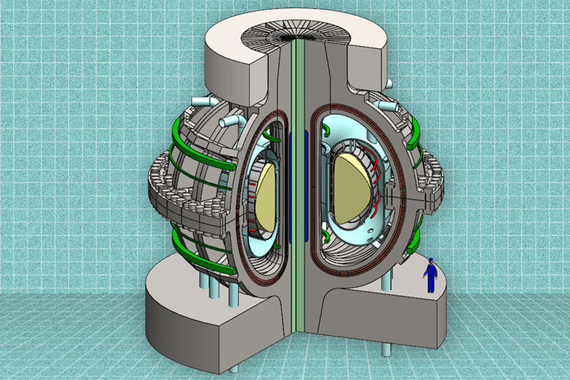 Additionally, the new superconducting magnets would enable the reactor to operate in a sustained way, producing a steady power output, unlike today's reactors, which can only operate for a few seconds at a time without overheating their copper coils.

The goal for any fusion reactor is to create more electricity than it consumes, otherwise what's the point? The MIT reactor should ultimately be able to produce five to six times the energy it consumes, MIT's scientists say, about 190 megawatts. If true, that would be a stunning breakthrough even if, according to some estimates, the cost of capturing that power would be more than ten times the price of, say, the equivalent amount of wind power for the foreseeable future. One compact reactor could provide enough electricity for about 100,000 people, bringing the true power of the sun into the home for the first time.