Hashim Sarkis' office overlooks the rooftops of Harvard Yard, the Harvard Lampoon, the newly renovated Harvard Art Museums opening this week and designed by renowned architect Renzo Piano, and from a distance one can see corners of Le Corbusier's Carpenter Center. It's a gorgeous view and not hard to equate with bird's-eye views of other famous landscapes from Florence to Montreal to Istanbul. But for Sarkis, the newly appointed dean of MIT's School of Architecture and Planning (SA+P) and current Aga Khan Professor of Landscape Architecture and Urbanism in Muslim Societies at Harvard University's Graduate School of Design (GSD), new classifications under the concept of a one-world city is at the forefront of his thinking:

Perhaps we can begin by casting the net wider and analyze more carefully the different things that we call "city." Maybe we can come up with a much broader list of categories rather than talk about "urban" versus "rural," and consider a broader range of possible ways of living together. If the urban is about diversity, how can we keep talking about the city in the singular? Maybe there's another way we can talk about it.

A prominent scholar of architecture and urbanism, and a practicing architect whose works span the United States and the Middle East, Sarkis weighs in on his new position and how the geopolitics of today may influence our thinking towards looking at how the world is becoming one city.

As a scholar and architect working in the US, what do you bring back to the Middle East?

When I started my practice in the late '90s in Beirut, I would say I took something back. I was part of a watchdog group on the reconstruction of Beirut. But now I don't see it like that anymore. My life is no longer "here" or "there." It's in both places simultaneously. It has converged in many ways and it is not until I am in Beirut and stuck in traffic that I realize it's a different world.

The idea of the here and there is one of the things I question and maybe I'd not have questioned it had I been only there, or had I only been here. For me, it is one world and I always yearn in my work to express it as such. These differences from which we form our identities are too small for them to matter. I seek more common human values as things that bind, and that's what I'm looking for in architecture.

What was one of your earliest projects that brought you back to Beirut?

When I set up my practice in Beirut, the first project was a non-government organization (NGO) project for a community of fishermen in Tyre, and I built my practice around that. This community of fishermen in Tyre was probably one of the poorest communities in Lebanon. They pride themselves on it saying, "we were fishermen before Jesus and because he came to preach to us, we became Christian." They're very proud of their identity. 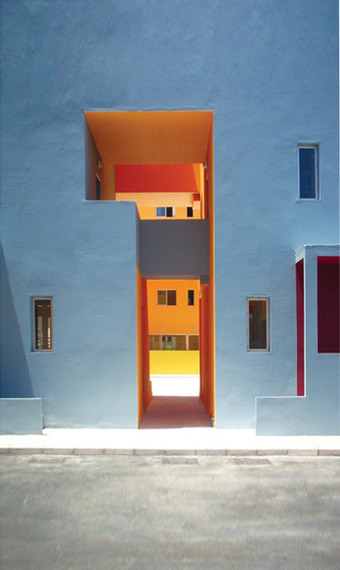 What you must understand is that the fishermen were not interested in improving their conditions. For them, their life choice was to either stay in Tyre, or join their cousin in Melbourne or in Montreal. Any move from these living conditions had to show that their situation had improved, in both their eyes and the eyes of their families. It had to be on par with everyday cousins in the modern world.

NGOs are fantastic clients in the sense that they bring you these amazing projects that open up different ways of thinking about architecture. As an architect, I salivate over programs that have yet to find an architectural expression where I can address emerging audiences and emerging habits of living.

How do you envision the city as we merge cultures?

The city as an entity has become difficult to understand or explain because it's everywhere and nowhere. It's scale-less. It's no longer bounded. Somehow old classifications have become unproductive.

It turns out people have been talking about this since the late 19th Century in science fiction. It's interesting that in H.G. Wells' War of the Worlds, what unified the world was the war of the worlds. I feel that there's a lot of work to be done on the question of where the city is going.

We are now living in an urban age. The United Nations reports that more than 50 percent of the world is in the cities, which is quite problematic because it excludes another 50 percent who are actually as connected. Using the term city misses the fact that you can be in the most remote town outside of Edmonton, Canada and still be very connected. You're still living an urban life. I don't think defining what is urban is clear anymore. Then there is the popular question of what makes a "world city?" London, New York, Tokyo -- these are the hubs of the global economy and they are the concentration of everything, but I also feel that we need to talk about the actual world as a city, meaning not world cities but a one-world city.

Would you give us an example?

Paris is so homogeneous and continuous and regular compared to London. London is a cluster of villages next to each other, right? We can ask which places are much more spread out. We can ask which places are tighter. That gives us a bigger repertoire than "city/not city" because it actually reflects more accurately how we're living today. Rather than answer the question directly, we begin to see it from another angle that helps us move forward.

What countries inspire you?

The Iberian Peninsula. My design formation was influenced by many architects from there, but also because there's a sense that architecture is a deep cultural investment and that every era brings with it architectural innovations that have to be respected. It is a place that has always attracted me.

Another place where I would really like to work and I have been close to going a couple of times is the town of Ljubljana, Slovenia. It's the capital of Slovenia and there's one architect there named is Jože Plečnik. [Google Doodle on Ljubljana's favorite local architect.] You look at his work that I have seen in Vienna, and you see the pleasure and the formality his architecture exudes. After time in Vienna and Prague, he went back to his hometown and virtually became the city architect. He built beautiful bridges, public buildings with the kind of continuity between architecture and urban for which something I strive. Every building speaks to centuries-of-ways we've been doing things but he pushes them forward and proposes a certain "civic-ness" that I admire in his work.

I think that beauty is not excessive. Beauty is essential. It is for me. It cannot be understood as excessive. People think of beauty as being "in excess." I think of it as being essential and that's coming out of our friend John Keats as well. I didn't say it. He said it.

What did he say?

He said, "beauty is truth, truth beauty." That's what you need to know on earth.

With the ongoing war between the West and the Middle East, what will happen in the end? Everybody's asking the same question.

How do you look at it as an architect?

In my work on geography in architecture, I was teaching a course where we tried to understand if there are other ways to understand the connection between cities and geography. There is a phenomenon that archaeologists have been working on for a long time called the Tal Formations. Tal is a mount or a hill and these are very prevalent in many prehistoric settings. They are artificial mounds that have been in accumulation of one settlement over the other, historically. They tend to be present in agriculture fields where they reflect that communities want to protect themselves, defend themselves, but also preserve as much of their cultural lands as possible. When you see a TAL in the back area of Lebanon or in Syria or even in South America, you know that this is a settlement and you start digging. Most of the archaeological sites are called TAL-something because they are focused primarily on that settlement. Today's war is taking place in an area historically called the Fertile Crescent, to include the Euphrates/Tigris, and it goes all the way up to the border between Turkey and Syria to the Mediterranean. It's like a crescent shaped egg and the work that archaeologists here at Harvard were doing shows the prevalence of this TAL formation in that area.

But at the end of the day what is happening is not only the destruction of historic cities like Hama and Aleppo, but also a complete transformation of this larger landscape that held us together, the Fertile Crescent, and a very pluralistic Middle East. And as a result, violence gets polarized along false lines of East/West, Christian/Muslim. It then makes it very difficult to reconstruct or to construct it as it was. I don't like to feel nostalgic but all of a sudden it makes me nostalgic for the concept of the Fertile Crescent and for the concept of a pluralistic Middle East, which is very hospitable to minorities and to variety.

The modern world is effacing this possibility of pluralism that has been present in us and with us for a very long time. That's what hurts me the most. But there are moments where you understand: when you tell your children stories about both the good and the bad, the here and the there, the us and the them, the theologies, and all of that. I don't see it as an ideological war. I don't see it as a war of "us and them." I see it as a war of polarization, which is coming out of certain despair, and out of an accumulation of strategic mistakes that got us here, unfortunately.

An event that you're looking forward to?

I have just accepted the job of being the Dean of the School of Architecture and Planning at MIT. Are you excited?

Sarkis' architectural work has been published extensively and has been displayed at the Museum of Modern Art in New York, as well as at Biennale exhibitions in Venice, Rotterdam, and Shenzhen/Hong Kong.

For the full interview with Sarkis go to TheEditorial.com.