In 1998, images from the Mars Global Surveyor spacecraft revealed something startling from Phobos, the unusual large moon orbiting Mars.

It appeared to be a very tall, 400-foot-high rectangular-shaped object jutting straight up and casting a long shadow on the surface of Phobos, as seen in the picture below. 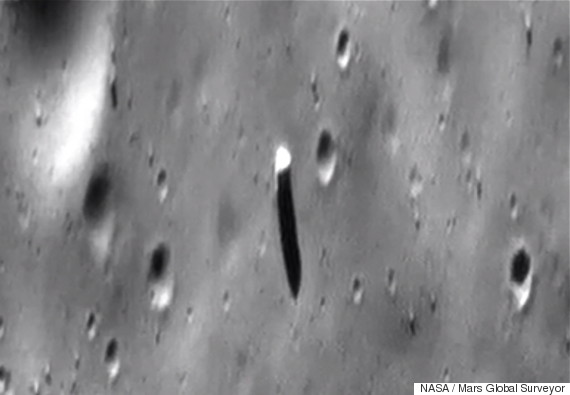 While most scientists feel this is just a natural rock outcropping of the moon, it still raises questions.

"Even if we see something that we can't explain, to conclusively say what it is, is a very different thing," says Florida Institute of Technology astrophysicist Hakeem Oluseyi.

"Suppose we find a perfectly shaped pyramid on another planet and we can't think of any way that could form by natural processes. That, to me, does not say that intelligence put it there. That says, to me, it's there and we have no idea how it got there. That's what we know," Oluseyi told The Huffington Post.

Oluseyi is featured on this week's return of Science Channel's "Are We Alone?" The series offers compelling stories about space and the growing belief among scientists that Earth is not the only planet that harbors life and, more importantly, intelligent life.

"In our galaxy, we're talking about something like 400 billion stars, and we now think there are more Earth-like planets than there are stars," Oluseyi, pictured below, said. "So, we're talking about hundreds of billions of planets. But the question of habitability -- whether or not they can support life -- is based on many factors.

"A conservative estimate -- if you say .1 percent of 100 billion -- would be tens of millions. We really don't know because, statistically, we haven't yet found a single one. But there are a few planets that have been discovered that have very high habitability indices."

And if you think those numbers are staggering, Oluseyi reminds us that we're only talking about the number of stars and planets in our own Milky Way galaxy.

"There are hundreds of billions of galaxies in the observable universe alone, which we think is a tiny fraction of what the universe is," he said.

And when it comes to outer space anomalies, like that Phobos rectangular rock structure, Oluseyi suggests that's the very essence of the Science Channel program.

"That's the thing about this show -- "NASA's Unexplained Files" -- is that we study both the facts and the fiction. The key is to address the question: Are We Alone? Which is this deep philosophical question that we ponder."

Another provocative subject explored in the series is what happened in 1969 at the end of the Apollo 12 moon mission, which concluded with the first-ever deliberate spacecraft crash.

Scientists wanted to know more about the moon's geological makeup, so they devised an experiment to measure lunar vibrations.

Lunar module pilot Alan Bean and mission commander Pete Conrad -- the third and fourth men to walk on the moon -- set up seismographic equipment on the lunar surface prior to rejoining command module pilot Richard Gordon, who had orbited the moon during the mission.

"We jettisoned the lunar module and it impacted the moon at just the right spot," Bean reports on "Are We Alone?"

"This was amazing, this is science fiction, except you're living it," Bean said. "The scientists said, 'Let's separate the lunar module and have it impact the moon just at the right distance away from this seismometer that [we] put there, and we'll measure how it vibrates, and that'll tell us what's going on in the center of the moon."

When Bean and Conrad were safely back on board the command module, the lunar module ascent stage was released, headed back to the moon's surface, to crash about 50 miles away from where the astronauts had walked on the surface.

The used module impacted the moon at 3,800 mph, creating its own crater. What the seismographic equipment recorded startled the folks in Mission Control -- It registered the moon ringing like a bell. This moon quake continued reverberating for more than 30 minutes, causing some to speculate our natural satellite is hollow.

"Are We Alone?" reaches out to believers and skeptics with the following provocative presentations:

"Close Encounters" -- a strange metal craft passes over Madagascar, plunging its capital city, Antananarivo, into darkness for 10 minutes; Texas police answer calls about a 200-foot flying object; a property inspector in Scotland is knocked unconscious after coming in contact with an unusual metal object.

"UFO Conspiracies" -- when unexplained lights crash into Canadian waters, the government declares it a UFO; Iranian jet fighter pilots are involved in an aerial dogfight with a UFO.

There's a lot more to see and wonder about on "Are We Alone?" on Science Channel this week. Check your local listings.

Is The Moon Hollow? And What Creatures Are Living Inside?
Aliens On Mars?