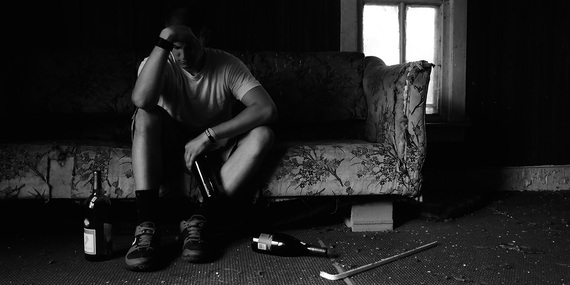 Growing up, my father was one of the kids himself, always cracking jokes and laughing. Sundays were known as "Sugar Sunday," where he stocked up on sweets and candies before I was sent home to mom, all hyper and unable to sleep. He thought it was funny. Mom never did.

His drinking was never a secret, though.

A week before my high school graduation, I found out that my father might attend the ceremony. I had not seen him for two weeks. Panicked and confused, I called around some relatives. My uncle later confirmed that my father was a few days into rehab/detox--he needed professional help for alcohol withdrawals.

It was a secret that later became a problem.

My father was ten pounds lighter when I saw him at my high school graduation. He was already a skinny guy. He seemed..."normal". Quiet, unlike his drunken state of mind.

He lived at his childhood home that summer, adapting to his new lifestyle. And so was I.

For the first time, I was able to watch a movie or TV show in peace, without being asked, "Who was that" or "What are you watching," and all the other annoying questions that drunk dad usually rambled on about. The sad reality was that my father and I were actually strangers--I did not know the real him, and he never knew me.

His relapse a few later was a bit expected, since he was always so eager to leave the house. He also stopped munching on candy and drinking coffee around-the-clock. Once, I counted that he drank eight cups of coffee in a single day; a substitute for alcohol.

I was already prepping for my first semester of college. I took extra caution whenever my friends and I hung out, especially if there would be any alcohol. There usually was, because everyone wanted to party before we went our separate ways for college.

It was a fucked up time, especially when my father gave me some parental advice prior to his relapse on being "careful" when it came to drinking. He told me that drinking was "hereditary" for his side of the family.

Some friends and relatives were supportive when they found out how bad my father got. Others were not.

As freshman year of college approached, I immediately connected my father's addiction to my own surroundings. I avoided wherever there could possibly be alcohol. Even signs ups for the college sororities left a bad taste. I had convinced myself that if I had a slight interest in drinking, then I was an addict.

I threw myself into my studies. If I was not working on homework, then my nose was buried in a book. It was a good distraction.

My sophomore year, I took my first screenwriting class. My professor had encouraged the class to write about personal experiences. I found a lot of solace and the beginning stages of closure from doing so.

Slowly, I hung out more with new and old friends. Best friend movie nights were ritual again. I had also accepted bar/club invites. For the first time, I was able to drink without feeling guilty.

Those who come from a family of addiction should know that it is never our fault.

Addiction is an illness that goes far too long unspoken in many households, sometimes even unreported. There are too many stigmas around it, especially for children of addicts.

Although my father, his father, and other relatives are addicts, that does not mean I am "next", because no one is ever destined to repeat the cycle.

We can defeat the stigma, no matter what.

Why You Should Date a Complicated Girl


The Benefits of Waking Up Early