Some people say opera is dying. Others say it's experiencing a kind of rebirth. I'm in the latter camp, as I mentioned in my most recent articles about the burgeoning of exciting new opera companies in the United States during the past 10 years.

But another aspect of the opera world that seems to be having a rebirth is opera marketing. When you think of making great art, marketing probably isn't the first thing that pops into your head. However, once we accept that we are now firmly living in a digital age, where social media creates revenue and dancing cat videos on YouTube can generate 14 million views and sell advertisements, it's difficult to ignore not only the importance, but the wonderful potential to reach new audiences that innovative marketing campaigns can create.

The reason I get so excited about marketing is that I feel it can actually go hand in hand with education about the art form to the masses. One of opera's greatest obstacles can often be that people stay away, believing the stigma that opera is boring, old, and stuffy. New and exciting marketing strategies have the ability to bust these stereotypes wide open while possibly entertaining and informing customers about what opera really is. Up until recently, most marketing campaigns, especially for smaller regional opera companies, have consisted of regular advertising on radio, television, and in print. However, more and more companies have begun dipping their proverbial toes into new forms of marketing their operas and their performers. While it may be too soon to judge the long term results of these newer strategies, I believe they can only help in altering perceptions and bringing people to a new awareness of what opera can be.

Four and a half years ago, when I was last singing with Portland Opera, I began experimenting with the idea of new marketing stategies by myself, totally by accident. I was blogging pretty regularly by then, and had the idea that I wanted to start vlogging (video blogging) as well. I bought a video camera while I was out here and started making videos of myself and some of my colleagues and friends going about our daily business as opera singers. I filmed my friend Daniel Belcher singing the National Anthem at the Blazer's game, the daily routine of an opera singer, and backstage antics. But where I think I started to hit on something was when I had the idea to have all of the singers try to come up with a synopsis of the Barber of Seville (the opera we were performing at the time) in ten seconds or less. I edited it and underscored it with its famous overture, and the results were entertaining. It wasn't exactly first class video editing, but the local newspaper, after seeing one of the videos that the marketing department had sent out, picked it up and featured the video in a little article about the opera.

At that point, I started paying attention to how various opera companies were choosing to market themselves. I started to see more humour and entertainment pop up in marketing. And usually, along with the funny came some information beyond just when and where the operas were happening. We usually learned something about the plot of the opera itself, and were sometimes introduced to the humorous side of many of the singers. I fell on the floor laughing when I first watched this video from the marketing genius at Des Moines Metro Opera, who used the actual singers portraying these roles for this video. I wish even more people had seen it because it's pretty brilliant. I'm not sure if this video sold extra tickets, per se, but I believe they are truly on to something with the wit and lack of pretension this video captures.

With a larger budget and more professional camera work, a similar idea was subsequently employed at Lyric Opera of Chicago in this series of videos entitled Doctor Opera, which featured, instead of singers, Chicago's famous Second City improv performers:

Another clever YouTube ad campaign I remembered seeing when I began writing this article was the small but obviously inventive Piedmont Opera, whose Marriage of Figaro ad had me wearing a big grin when I watched it:

And an entirely different approach is the flash mob style video, in which singers or performers descend upon an unsuspecting crowd and perform something in their midst. This not only promotes the opera to the people in the crowd at the time, and gives some their first taste of hearing an operatic voice live, but can continue to promote the opera company if the video goes viral, like this version from Opera Philadelphia.

New ideas like "tweet seats" where a viewer is not only allowed but encouraged to tweet their reactions to a performance while the performance is happening, may encourage younger audiences to participate. Nashville Opera's John Hoomes has tested out the idea of having members of the cast and artistic team watch a video of the opening performance and comment on the happenings, and making this audio available to people on their smart phones for second time viewers of that opera in order to have a "director's cut" experience. Facebook postings and giveaways along with blogs and podcasts have become more the norm than the exception.

But the question remains: what kind of audiences do these clever marketing campaigns really generate? To answer that, I turned to the amazingly inventive and dedicated leader of Opera Memphis Ned Canty, whose creation "30 days of Opera" has made an enormous impact on both his company and his community. Using every possible method to streamline opera directly into the soul of of their town, Opera Memphis presents opera every day for 30 days in various forms; from drive-through opera arias, to library and school performances, to farmers markets, bars, art galleries and parks. This community saturation of opera seeks not only to introduce people to the art form who might not have had exposure to it, or who have negative opinions of it based on incorrect assumtions, but also to expose people who might already have an inclination to go but need some reminding of just how potent the art form can be. I could write an entire article about the ingenuity and impact I believe a campaign like this can have on a community, but as for the hard numbers, Opera Memphis was able to attribute 5% of their total box office sales to brand new audience members who had never attended an opera before, and sold many tickets to lapsed subscribers at the 30 days events as well. But more importantly, Canty states, "The dream always was for people chatting at the water cooler to say "the strangest thing happened at the dog park yesterday" and the person listening to say "Oh my god, they were at Central BBQ last week!" That has certainly been the case, and now we even have groupies who will come to multiple events throughout the month. More importantly, we have screenshots of every tweet and post, and can show people the ones that say #ilovememphis or #choose901. For anyone who thinks of an opera company as a producing organization that has x hours of content a year, this is a way to disprove that and show that a vibrant opera company can improve quality of life for the entire city--or as David Devan puts it, be an engine of civic pride. A positive feeling towards the company helps grease the skids of getting someone in the door, as does showing we have a sense of humor by doing things like singing Rossinni's Cat Duet at a dog park. " 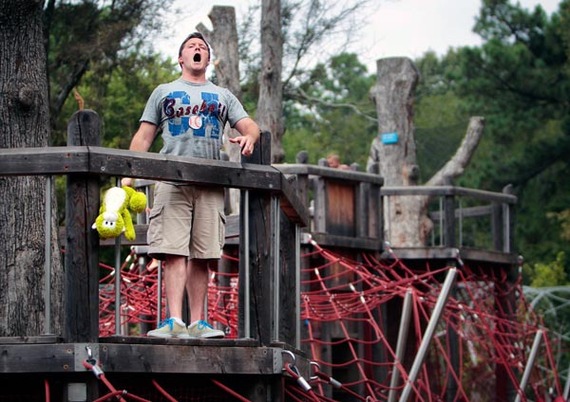 Photo of Joel Herold courtesy of The Commercial Appeal/Jim Weber

And so, as I returned to Portland, I began to think of how I could create something to promote the opera we're now performing --Die Fledermaus -- that would both entertain and inform. I knew I wanted to use the singers themselves to introduce them to the audience, and I knew I wanted to feature them in the community of Portland, which happens to be extraordinarily vibrant. Unlike my initial forays into vlogging, this time I enlisted the help of the wonderful marketing department and it started to feel like a project that tied together the singers, the opera, the company and the community. And because I can't help but want to bash those stodgy stereotypes, I almost always use humour whenever I create any media content related to opera. Plus, this is a comedy we're performing, after all. And opera singers can be really funny, both onstage and off.

So here is my contribution to this new type of opera marketing. I hope it does its own small part to keep creating buzz about an ever evolving art form that continues to enthrall people even through the centuries.

*special thanks to Portland Opera Marketing gurus Jennifer Wechsler (who did all the videography) and Mark Tiarks, opera signers extraordinaire Andre Chiang, Ryan MacPherson, Daniel Belcher, Susanna Biller, Mary Dunleavy, Alexander Elliot, and Katrina Galka, and willing organizations and merchants The Oregon Zoo, Hollywood Vintage, Voodoo Doughnuts, Stumptown Roasters, and The Pilsner Room at McCormick and Schmick's. And to my indefatigable husband Michael Rice, who edited and narrated the whole project during his vacation days.