It's always been a sad yet satisfying ritual, taking down the dry, needle-shedding tree that's consumed a corner of the living room for weeks. It means we've survived another holiday season, turned the corner of the year, emerged from the sugar-tunnel of family togetherness into our separate identities.

With the tree gone, the old house feels airy and spacious. We've been granted a reprieve -- we can start again, maybe do things better the next time around.

"This is the most beautiful tree we've ever had!" says C., age 7, admiring the fairy lights and glass baubles. She wants to leave it up till next Christmas, until I explain that Balsam has a shelf life and will eventually wither into a brown skeleton. We all feel sad for a moment, then get to work.

A. (age 9) unwinds the lights as I reach high into the prickly branches for the most fragile ornaments. C. munches the hanging gingerbread man she's been ogling all December then collects the lower-level decorations -- painted wooden orbs and metallic stars, ceramic suns and animals.

But in the cardboard box where we keep the ornaments, an unfortunate discovery awaits...

"Shelf-Elf!" shrieks C. when she opens the top, and I realize I've made a careless mistake! I'd stuffed the Elf on the Shelf in that box on December 24 and forgotten about him. 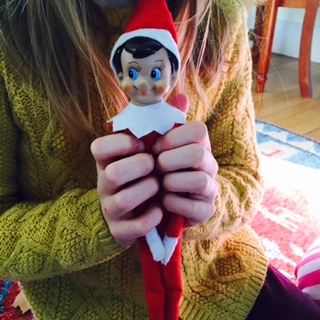 The wee, red-and-white "scout elf" was supposed to return to Santa's workshop on Christmas Eve and not reappear till next December (according to book that accompanies him). Hiding the elf every night was a fun ritual when the girls were in preschool, but I've grown weary of perpetuating it. My husband has valiantly kept the elf-flame alive, and both girls seem eager to continue believing. Or pretend to keep believing.

A. grabs Shelf-Elf and cuddles him to her chest. Legend forbids children from touching the creature during the holidays, lest they disturb his Christmas magic. But now he's been discovered hiding in a box on January 10, all bets are off.

"Made in China?" A. asks dubiously. She fingers a white tag on Shelf Elf's rump. "I thought he was from the North Pole."

C.'s face falls like a crumpled cake. "Santa's not real!" she sobs, throwing herself on the floor.

A. and I exchange glances. This devastation is not a surprise -- C.'s been dancing around the Santa story for months now, picking up on her big sister's skepticism. A. has mentioned she may not believe in Santa anymore, but I've never point-blank confirmed her suspicions. I can tell she's reluctant to give up the charade, and frankly, I am too. I don't want her to cross the palpable line that separates little-kid from big-kid. 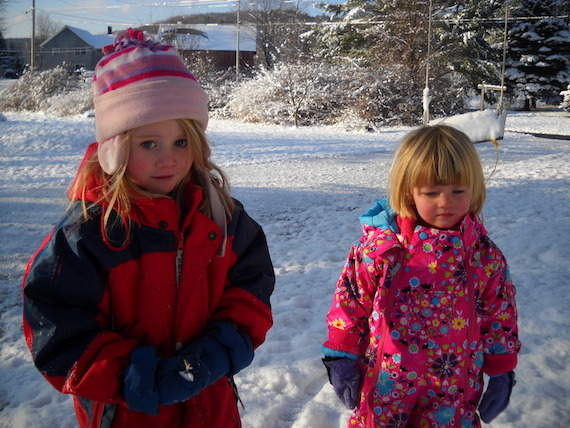 Gathering my youngest in my arms beneath the half-bare tree, I start talking.

"Hmm, I don't know about Santa. There are mysteries in the world that we can't explain. No one really understands the magic of Christmas."

"But he's not REAL!" C. protests. "Not like they say in school or in movies. If you went to the North Pole, he wouldn't even be there!"

How long do we parents perpetuate the myths? I've always been vague and noncommittal about the Tooth Fairy, never indulged in the Easter Bunny. But Santa is the holy grail of childhood magic. I'm avoiding the topic, not coming down pro or con. Is it dishonest to maintain the fairy tale just one more year? Does it hurt anyone? Or does the illusion serve me more than it serves my kids?

Christmas in my family brings an acute awareness of loss. In the deep dark of late December, I grieve my Dad's sudden death nine years ago, only weeks before A. was born. I mourn my Mom's cruel illness, deemed irreversible. And amidst the frenzy of decorating and baking and shopping and wrapping, the pressure to keep up traditions, I am not my best self.

I'm not ready to dose my children with realism. I need their sweet naiveté to carry me through. I need to leave the milk and cookies for Santa as much as they do.

Eventually C.'s tears subside and she returns to packing the ornaments one-by-one into their box. For now, she's willing to accept ambiguity. A. wrestles with the last strand of lights as I slip Shelf-Elf into a paper bag and stuff him away. My mate arrives for the final task of lugging the fir through the front door and across the snow-pack, dropping needles in its wake.

RIP, Christmas tree, out on the burn pile. You were a beauty. 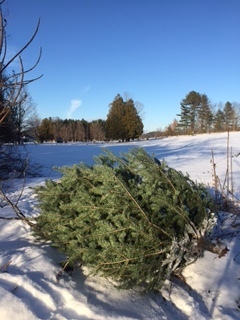 US Presidential Election 2020
Breaking news, analysis and the latest polls on the presidential race from HuffPost’s politics team
See More
Voting Made Easy
Register to vote and apply for an absentee ballot today
Register now
More:
lying to childrengrowing upElf on the ShelfMotherhoodParenting
Newsletter Sign Up
Raise the kind of person you'd like to know
Subscribe to our parenting newsletter.
Successfully Subscribed!
Realness delivered to your inbox