The verdict is in: The typical American is even poorer than his or her equivalent in Greece. The median Australian is four times wealthier. The Canadians are twice as wealthy. To be sure, we continue to lead the world in billionaires (571 in 2014, with China a distant second at 190). But after 30 years financial deregulation and attacks on employee rights, we rank 26th in median wealth (defined as all assets owned -- banks accounts, investments, homes, cares, etc., minus all debts owed for the person precisely on the middle rung of the wealth ladder). 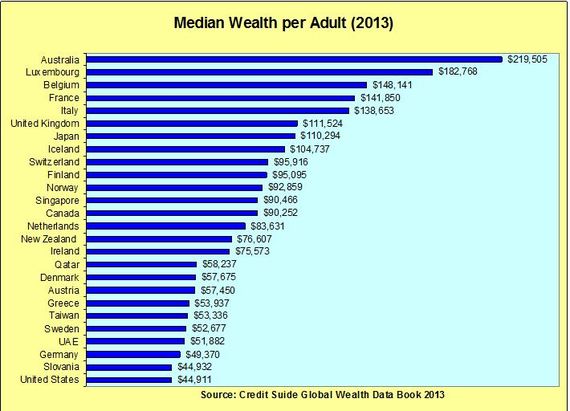 It's not an accident:

During the Cold War, our working class was the envy of the world. We argued that our free-enterprise system, not communism, created the best conditions for a rising standard of living for all. Indeed, there was much to boast about. Real wages were increasing year after year. American workers were free to go on strike and did. And most importantly, the children of working people could climb the economic ladder -- upward mobility was real.

Today, by almost every measure, none of this is true. Not only do we rank 26th in median wealth, we also are the most anti-employee country in the developed world. Actually, the two go together because rising inequality results from our pro-Wall Street and anti-worker policies.

The Organization for Economic Cooperation and Development (OECD) ranks 43 nations by the degree of employee protection provided by government. The 21 indicators used include such items as laws and regulations governing unfair dismissals, notifications and protections during mass layoffs, the use and abuse of temporary workers, and the provision of severance based on seniority. Countries are ranked on a scale of 0 to 6 with 6 going to those who provide the most legal protections for employees and 0 for those with the least. We're ranked #42 out of 43, meaning that we have among the fewest regulations to protect employees -- union, non-union, management, full-time and temporary workers alike.

Women often get hit the hardest. The lack of good policies on pregnancy leave and child care also are horrendous in the U.S. compared to other developed nations, forcing millions of women to choose between career and family. (See "Why U.S. Women are Leaving Jobs Behind", NYT, Dec. 12, 2014)

During the late 1970s, pro-business policy makers, pundits and academics came up with the "Better Business Climate" model. They said we could get out of the 1970s period of high unemployment and inflation (stagflation) if we unleashed business by cutting taxes and regulations. In particular, the theory held that businesses need maximum "labor flexibility" -- that there should be virtually no legal restrictions on employer-employee relations. The more flexibility, the more economic efficiency, and therefore the more economic growth. The pie would grow bigger and there would be more for everyone.

Here's what happened instead. Virtually all the "growth" went to the top fraction of 1 percent. The bottom 90 percent stagnated. 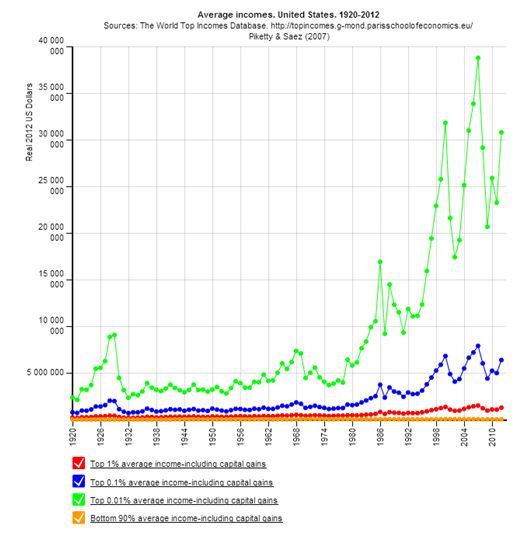 But what about upward mobility?

Many argue that America has never been about income equality. Rather we're more about equal opportunity so that everyone has a fighting chance to move up the income ladder. This is supposed to be the land of opportunity, not aristocracy. Surely we are still the envy of the world when it comes to upward mobility.

Today, in the U.S., the odds are about 50/50 that you'll do the same or worse than your parents. (See chart below). In Denmark the odds are greater than 4 to 1 that you'll improve your economic position. 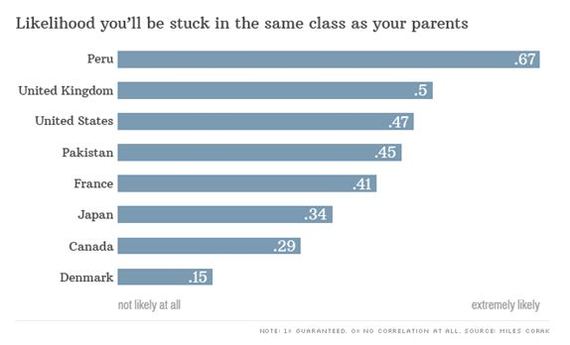 The most important regulations that corporations want to eliminate are those that support unionization. They have done a masterful job, according to OECD data. American has nearly the lowest union density rate (the number of union members, both public and private divided by the total number in the workforce). 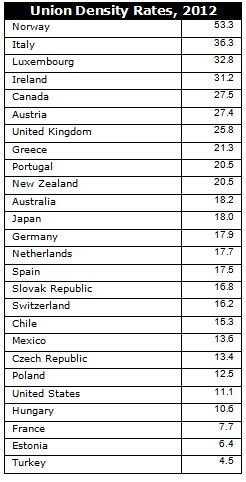 It's amazing how many factors come together around 1980. The Better Business Climate model became public policy. Finance was deregulated. The income gap took off. Private and public debt mushroomed . And Wall Street and CEO compensation skyrocketed. Worker strikes also fit this picture, as the chart below shows. Mass strikes virtually disappeared, making it extremely hard for workers to collectively press for higher wages and set higher wage patterns for non-union workers as well. 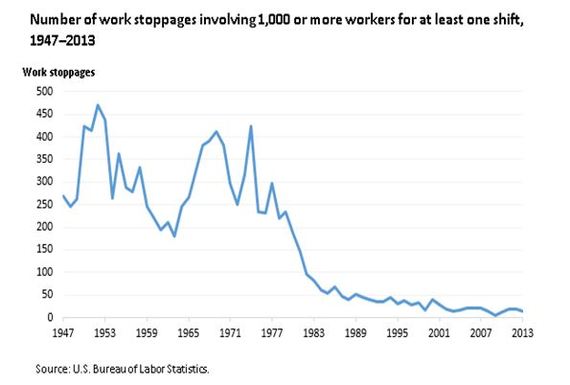 Fork in the Road

Each day we try to patch together a decent existence. It's hard, even painful, to step back to examine the big picture. But when we do, it's easy to see that we've been had. The Better Business Climate model has failed the average American. We have few rights on the job and fewer unions to protect us. Upward mobility is dwindling for our families.

Sooner or later, the American public will figure this out. But which way will they head? The Tea Party offers a path forward full of vitriol and hate. They blame the government, not Wall Street. They blame immigrants, not CEOs. They vilify the "takers," while allowing the "makers" to rob us blind. They want more war against global terrorism, not war against global warming.

The other path is clear. We need to take on our elite financiers and CEOs. Cut their compensation. Raise their taxes. Close their loopholes. Encourage workers rights, unions and full citizenship for the millions who live here in the shadows. And dramatically curtail CO2 emissions.

In yesteryear, we would expect the Democrats to lead the way. But except for a very few, that won't happen as the party tries to endear itself with the rich and famous. They want Wall Street donations, not confrontations.

We're on our own. We'll need to piece together a new movement that challenges elite financial power. The first step is to show our fellow countrymen and women again and again what has become of the American Dream. It took a generation to rob us of fundamental economic justice. It may take even longer to get it back.