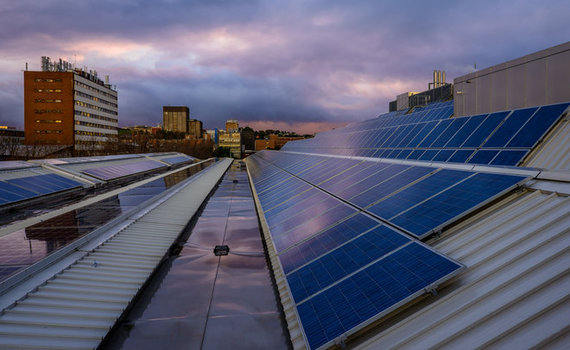 We constantly hear how solar and wind energy is already cheaper than fossil fuels. A few months ago, Bloomberg Business declared that "wind power is now the cheapest electricity to produce in both Germany and the U.K., even without government subsidies."

If renewable energy is cheaper than dirty fossil fuels, why isn't everyone adopting them? Are we so irrationally addicted to polluting energy sources that we won't even embrace cheaper and cleaner alternatives?

Well, as you might have guessed, it turns out that wind and solar energy isn't cheaper than fossil fuels in the real world. Quite the opposite.

A new report from the same Bloomberg now warns that if subsidies are phased out by 2020 in the U.K, the renewable industry will dry up and drop off a cliff. But if they're already cheaper now, why on earth would it matter if we stop paying even more for wind after 2020?

With formidable doublespeak, Greenpeace tries to square this circle by saying that renewables are both competitive and need subsidies for many years after 2020: "Wind and solar energy are at the point of becoming really competitive with fossil fuels, but failure to support them for another few years will result in huge losses of potential jobs."

That is a claim we've heard many times since the 1970s - just a few more years of subsidies, and we'll be off. In 1976 Lovins told us that "a largely or wholly solar economy can be constructed in the United States with straightforward soft technologies that are now demonstrated and now economic or nearly economic." And it still isn't.

Truth is, wind and solar PV will be trivial contributions to global energy for the next quarter century. The International Energy Agency estimates that today just about 0.5 per cent of global energy comes from solar and wind (see graphic below). Even in 2040, even if everyone does everything they've promised at the Paris climate summit, the world will get just 2.4% of its energy from solar and wind. 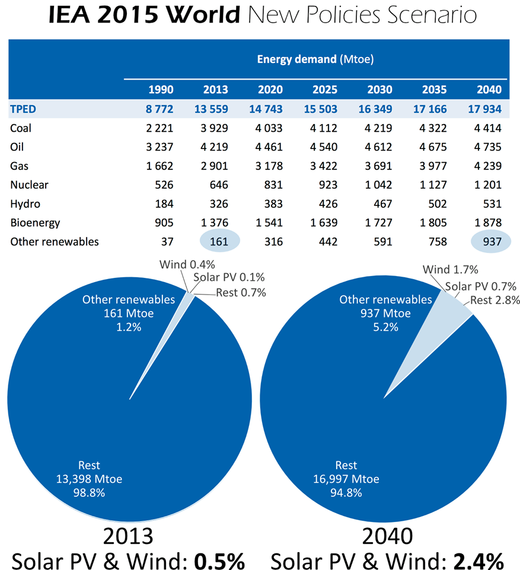 Still, it will cost a fortune. This year the world will spend about $106 billion on subsidies for solar and wind, and even by 2040 it will not be cheaper than fossil fuels - we will still have to pay $84 billion in subsidies annually. The International Energy Agency estimate that even by 2040, renewables will on average be more expensive both in the developed and developing world than any other energy source, like oil, gas, nuclear, coal and hydro.

Instead of spending billions of dollars to prop up today's inefficient wind and solar energy, we should be investing more in green research and development to innovate the price of green energy down below fossil fuels. Bill Gates managed to get almost all developed countries to agree to double their green R&D investments from $10 billion to $20 billion, and that is a great start. But we need to push that investment further to $100 billion per year.