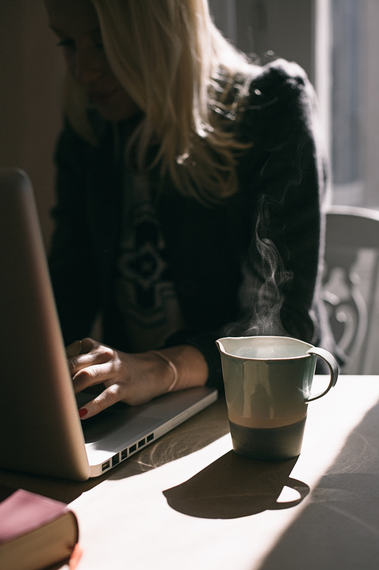 I recently saw one of my mentors from India, Jayesh Patel, who has dedicated his life to service. One of Jayesh's favorite expressions is: "be a ladder, not a leader."

At first, this expression vexed me since I'm a women's leadership coach and I believe we need more women leading. But what Jayesh proposes is a shift in paradigm from the American ideal of advancement to one of focusing on service (i.e, decentralized leadership; see Charles Eisenstein's work).

I truly believe, in my heart of hearts, that we are redefining leadership to include a more feminine perspective. The way we are currently talking about leadership, especially in the realm of women's careers, seems outdated.

In a recent study conducted at the Harvard Business School, men and women were shown a ladder with rungs numbered from 1 to 10 and were asked to choose a rung for their ideal position. When thinking about what they wanted, women chose lower rungs on the ladder.

The researchers, and the media, concluded women are less "ambitious" and in many ways, that's true. Compared to men, women in the study listed life goals that see the whole picture, not just work. They also associate having power with more conflict and negative consequences (which is real, since we still live in patriarchy).

If leadership is defined as climbing up the corporate ladder, women are less "ambitious." We are less willing (or interested) to play the old game. And that's why we will lead the effort to redefine leadership. In this redefinition, leadership is about choosing what's meaningful, and not about climbing to the "top." Leadership means starting a business, writing a book, having a baby, or doing whatever the hell we want. Leadership is being redefined to be more cooperative, deep, personal, vulnerable, relationship-based, and service-oriented.

As shared in this wonderful NY times piece, women want to study engineering when they feel it can make a meaningful difference and impact in other people's lives. In other words, women are natural ladders. It isn't about climbing to the top or being number one, for more and more women, it's about being of service.

If we defined leadership that way, my bet would be women are equally if not more ambitious than men.

Are you tired of playing within the system? Do you find yourself becoming less and less "ambitious" in the corporate sense of the word? If so, comment in this post!