By Bill Bradley for GQ. 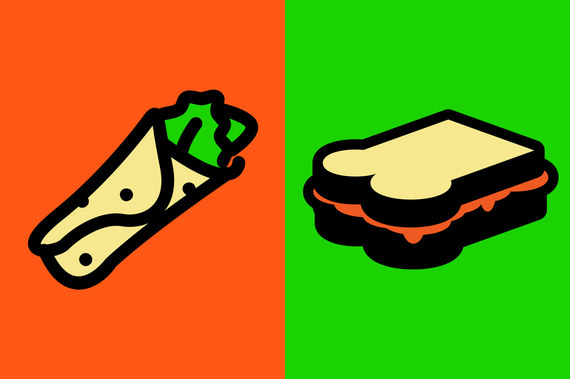 You know that thing you do at the deli where you decide you're gonna get a healthy lunch and, in an earnest attempt to do the right thing, ask your sandwich artist to put it on a wrap instead of bread? You can stop doing that now.

Experts say that wraps are oftentimes more processed and higher in calories than two slices of fresh-baked bread. This makes wraps an insane thing to eat, because everyone knows that fresh-baked bread is delicious and wraps taste like wet cardboard.

The same thinking applies to whatever sandwiches you might make at home, with bread or wraps purchased at your local carbohydrate emporium.

"You want to go straight to the ingredient list," says Carrie Jennis, a registered dietitian and health educator in New York City. "The first ingredient should be 'whole.' Whole wheat flour, whole rye flour. This ensures you are eating a whole grain product. This means that you are getting the fiber, minerals, and nutrients normally found in the actual grain before processing. The other ingredient to look for, so you can avoid it, is hydrogenated oils."

Those hydrogenated oils, commonly known as trans fats, are not good for you. They are often found in wraps. Take, for example, the Original 10-Inch Wrap from Mission (arguably the most ubiquitous wrap company, with products sold everywhere from big-box grocery stores to corner bodegas.) While the label says the wrap contains 0 grams of trans fat, the ingredient list boasts "hydrogenated soybean oil," which is to be avoided. The wrap also has 580 mg of sodium, while two slices of whole wheat bread typically fall between 200 and 300 grams.

(We do, however, tip our cap to Mission's copywriters, who have the unenviable task of saying something positive about their product. "Wraps let you expand your sandwich offerings," they proclaim. "Enabling you to create innovative, on-the-go masterpieces.")

One not-so-great innovation is the size of these things. Some wraps are big enough to accommodate huge amounts of fillings -- by the time they're all rolled up, they become a monstrous caloric log.

"When I'm at cafés, I see a lot of wraps available where the surface area is the size of a Frisbee. Too big," says Lori Zanini, a registered dietitian and spokesperson for the Academy of Nutrition & Dietetics. "The larger the wrap, the more ingredients tend to get stuffed in them. Typically wraps will have more calories and carbs than a regular slice of bread, because wraps are more condensed."

You could argue that some wraps -- like Mission, which clocks in at 210 calories -- have less calories than two slices of bread, which typically hover between 160 to 240 calories total. But this is negligible when your deli guy is stuffing your wrap with an extra 375 calories worth of tuna salad.

So here's the good news: You no longer need to deprive yourself at the sandwich counter. Go all in with actual bread -- which, admit it, is what you really wanted in the first place.

More:
healthy livingHealthDietDiet And Nutrition
Newsletter Sign Up
An essential daily guide to achieving the good life
Subscribe to our lifestyle email.
Successfully Subscribed!
Realness delivered to your inbox