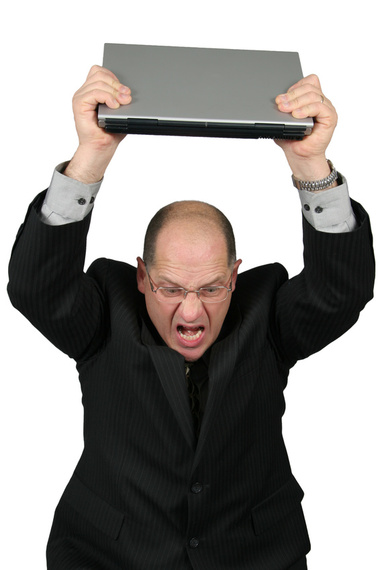 Over the years, I have worked with and witnessed CEOs who were completely dysfunctional. They had angry outbursts, belittled their employees, micromanaged everyone, refused to spend money when needed and treated "A" players like school kids.

Yet they were somehow successful - to a point. Since they had achieved some level of success, they were clueless of their shortcomings and bizarre behavioral issues. I empathized with their staff and wondered when they would leave.

Company growth is stunted when the CEO has behavioral issues. Few people in the company will tell you that there is a problem for fear of retaliation, so they put their heads down and start shopping their resumes around, seeking a safe place to land when they finally can quit. When they depart, the bewildered CEO scratches his or her head and can't figure out why they left such a great boss.

The company settles in at a certain level of competence and revenue, and can't seem to break through to the next level, no matter how much the CEO micromanages. So, how do you know if you are a CEO with behavioral issues, particularly when no one will tell you? Here are some things you can do:

First of all, you probably already have some inkling that there is an issue but refuse to admit it. You need to accept your intuition and feelings. You sense after an incident or outburst that you were in the wrong but you blow off those feelings. Stop doing that. Accept your bad behavior, apologize and make yourself aware of your behavior. Vow to do better.

When something is going badly, mentally pull yourself out of the situation and look at it as if you were an objective observer. Scrutinize your own behavior from the perspective of a witness - with no emotion or agenda - and ask yourself what you think of that person's behavior. It can be an eye-opener.

Get an outsider - preferably a consultant - to do a 360 review. A "360" is typically an anonymous survey of the people who have contact with you (it can be both work and personal), and those that are most likely to evaluate and articulate your behavior: peers, direct reports, business partners, advisors, etc.

The results of a 360 can be quite enlightening. It can help a CEO get a better sense of how he or she is perceived by employees. For some of us, that may not be very encouraging - but it's something that every CEO should know.

4. Use outside advisors to get the truth

Hopefully, you are not dysfunctional enough to go it alone - you have a board of advisors, or you belong to a peer group like Vistage, or you have key people outside of your company that you go to for advice. These people, who have no vested interest in your company, and have some level of experience as executives, and expertise in running a company, can give you some unbiased and truthful feedback on your behavior.

The lesson here is that we usually fail to see our own shortcomings, and when it comes to behavioral issues, we are sometimes oblivious. These problems can severely restrict our ability to attract and retain top talent. Furthermore, it can keep our employees from giving us the loyalty and respect we need to lead the organization. If that's the case, it becomes impossible to take your organization to the next level.